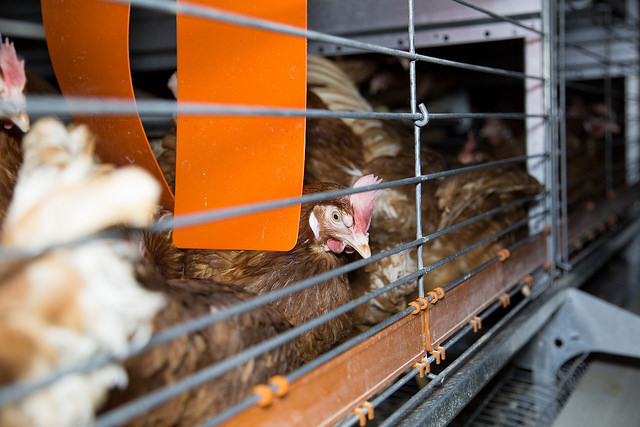 Eggs raised in cages are not likely to ever see the Golden State again, if the Supreme Court takes the advice of the Department of Justice.

Last week, the DOJ advised the Supreme Court not to hear a lawsuit against California by egg producers from 12 states. It said California's ban on eggs laid in cages does not violate the Egg Products Inspection Act - a key law in the plaintiff's case.

"[California's egg laws] are not preempted by the EPIA, because USDA's egg-grading standards do not address confinement conditions for egg-laying hens," Solicitor General Noel J. Francisco wrote in the DOJ's amicus brief, according to the New Food Economy.

Over the past decade, and much to the chagrin of egg producers across the country, Californians have passed a string of animal welfare and food production laws.Â In 2008, voters approved the Prevention of Farm Animal Cruelty Act. That meant farmers in the state could no longer raise animals in confined spaces where they can't stand up or turn around. In 2015, California banned the sale of eggs laid in confinement-wherever they're from.

The states suing California say its laws will lead to higher egg prices for consumers. But the Department of Justice says California's law is only one of many possible factors in the rising cost of eggs. California officials say these laws are designed to protect consumers from health risks, as well as level the playing field for California farmers competing with out-of-state farms that have lower animal-welfare standards.

As FERN's Ag Insider points out, California is among the top egg producing states in the country, with over 13 million laying hens and more than 3.7 billion eggs produced in 2017.