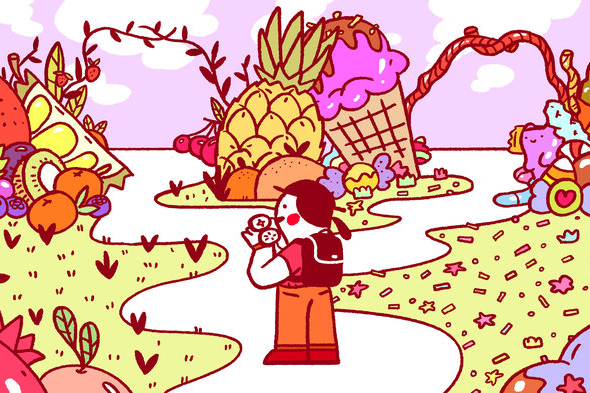 If vegetables are the monarchs of nutritious eating, fruits have always been part of the royal court — not quite as important, but still worthy of respect. But now that nutrition guidelines are cracking down on sugar, some people are questioning fruits' estimable role in a healthy diet.

One need only go to Twitter to see the confusion. "Pilates instructor started talkin about how fruit has so much sugar and a banana has the same as a Snickers bar," reads one tweet. Other users come to fruit's rescue: "Fruit sugar and sugar in processed foods is not the same thing," one user explains.

No, sugar in fruit and added sugar is not the same thing, says Lauri Wright, a nutritionist, public health specialist, and spokesperson for the Academy of Nutrition and Dietetics.

"There's so much confusion," Wright says. "I think this comes from the idea we've had for some time now that all carbs are bad, and that's not the case. Carbs are required for energy."

There are lots of kinds of sugar. Fruits have fructose, glucose, and a combination of the two called "sucrose," or "table sugar." But the sugars in fruit are packed less densely than in a candy bar, according to Elvira Isganaitis, a pediatric endocrinologist at Joslin Diabetes Center and a Harvard Medical School instructor. This difference is important for people with diabetes, a disorder which interferes with regulating sugar in the blood. When people eat something sweet, they usually have a spike in blood sugar levels. Then the spike plateaus, and the amount of sugar in the blood eventually drops back to normal. Fruits generally cause a lower spike than sweets, Isganaitis says, making it less dangerous for people with diabetes monitoring their sugar levels.

But even for people without diabetes, sugar in fruit is a healthier option than sugar from other sources, according to nutritionist Wright. A can of soda, for example, has about 40 grams of sugar. "And what else are you getting with that?" Wright asks. "You're getting no protein, no minerals, and no fiber. You get nothing but the sugar and the calories."

A serving of fruit, by contrast, usually contains no more than 20 grams of sugar, has fiber, and has nutrients like vitamin C. As Wright puts it: "You're getting a lot of bang for your buck." And fiber and lower sugar amounts can also decrease sugar spikes in blood levels.

That doesn't mean there aren't possible pitfalls for fruit freaks. Dried fruits, Wright says, tend to pack more sugar into a bite because they're so concentrated. She advises people with diabetes in particular to consume dried favorites with caution.

Both Wright and Isganaitis also warn that smoothies can commit sugar sabotage. That goes for juices, too. "I have a little bit of a bee in my bonnet about fruit juices, because they really masquerade as a health food," says Isganaitis, "but you can get a whopping dose of glucose [and calories]." She advises that people eat whole foods, including fruits, and steer clear of processed foods, especially those sweetened with high-fructose corn syrup, concentrated apple juice, or the like.

Wright says she hopes people with diabetes in particular are not frightened off fruit by warnings about added sugar in other types of food. As for herself, Wright frequently eats fruit at her home in Florida: "I live in the Sunshine State, and you may think my favorite is oranges, but actually, we have wonderful blueberries."

Gnawing Questions is a semi-weekly column answering the food mysteries puzzling us and our readers. Got a question you want us to explore? Let us know via our contact form.