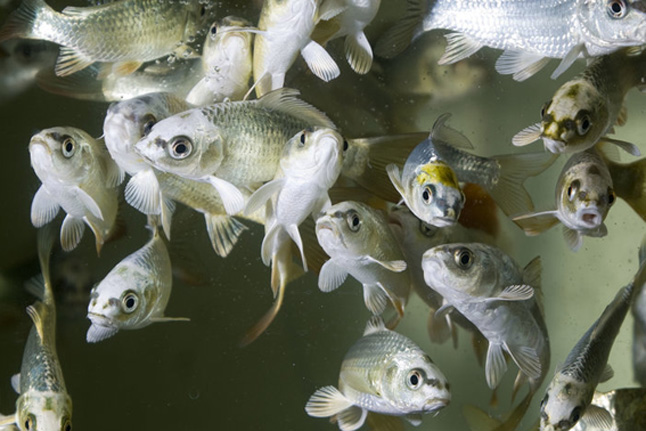 Each year, fish farms produce a massive amount of carp - so much that if you put all that fish on one side of a scale, and all the people living in the U.S. on the other side, they'd pretty much balance each other out by weight.

But for the past couple of decades, carp have been plagued by a type of herpes virus, known as Koi herpesvirus.

Now, as researchers reportÂ in the journal Cell Host & Microbe, there's a simple way to prevent fish from dying of the virus. And during their investigation, the researchers also found something intriguing about how fish - and humans - fight infection.

The virus first appeared in the 1990s, when carp around the world started dying.

"The virus emerged from nowhere. We have no idea where it came from," says Alain Vanderplasschen, an immunologist at the University of Liege in Belgium who studies carp.

"A healthy fish is very proud, very pretty to look at," he says. Infected fish, on the other hand, would lie at the bottom of the tank, their fins limp and bodies secreting a cloud of mucus.

"You won't eat these carp. They look really ugly," says Vanderplasschen. The virus was killing off swaths of fish, delivering a big blow to the industry.

So Vanderplasschen and colleagues set out to develop a vaccine. In the process of that research, they noticed that sick fish would huddle around the aquarium heater, he says, "like they were trying to warm up a little bit."

Maybe, he thought, heat could help them fight infection. It's been known for a while that fish (and other animals that can't generate heat internally) could help their immune systems fight off infection by moving to a warmer spot. The phenomenon is called "behavioral fever."

Vanderplasschen and his colleagues wondered if a certain temperature would allow the fish to vanquish the virus. So they built a tank with three chambers connected by tunnels. One chamber was 75 degrees Fahrenheit, the temperature that carp normally thrive in. Another was 82 degrees, and a third was almost 90 degrees - a temperature considered way too hot for carp to be happy. (The water in a hot tub, by comparison, tends to be about 100 degrees.)

When the researchers dropped healthy fish in the tank, the fish would explore the chambers and eventually settle in the coolest one. But carp infected with the herpes virus would settle in the hot compartment.

"It's really too hot, but they decide to go there," says Vanderplasschen. "And they will stay there for a few days. And as soon as they reach this temperature, they completely control the viral infection."

If carp farms would just give fish an option to swim to warm water, says Vanderplasschen, they might not have to worry about losing a bunch of fish to the virus, or about vaccinating them to prevent that from happening. It's a simple solution to a complicated problem.

"But that's just the beginning of the story," says Vanderplasschen. Something else about the infected carp grabbed his attention.

Usually, animals - including humans - will become feverish soon after getting infected. But the carp waited about five or six days after infection before swimming to hot water. That meant the virus had almost a week to replicate in the fish, making them more and more ill as they days passed. Why, the scientists wondered, did it take them so long to start their fever behaviors?

Maybe, they hypothesized, the virus was somehow controlling the fish, preventing it from swimming to warmer water.

After four years of research, the scientists have concluded that yes, the virus does control the behavior of infected fish.

The virus, they found, secretes huge amounts of a certain protein, called ORF12, into the carp's blood. And that protein scams the fish immune system, acting as a decoy receptor for another protein, TNF-alpha, that the body normally uses to alert the immune system that it's time to mount an attack. It was intercepting those signal proteins before they could reach their destination to alert the immune armies.

When the scientists created a version of the virus that was incapable of producing ORF12, the fish would swim to hot water shortly after infection and get rid of the infection quickly.

So with just one gene, encoding for one protein, the virus was able to hold the fish back until the virus had multiplied.

That's interesting for a couple of reasons.

"On one hand, it's interesting from a very practical point of view, from an aquaculture point of view," says Maureen Purcell, a research microbiologist with USGS's Western Fisheries Research Center.

"Koi herpesvirus is actually a pretty serious virus," she says, and the aquaculture industry is still looking for a silver bullet to fight it. (On the opposite end of the spectrum, the Australian government has considered releasing the virus on purpose to get rid of invasive species.)

"This is different. Here, they're showing that the animals can do this behaviorally themselves, not through human manipulation," she says. "And then to show that the virus has figured this out and come up with a way to delay this behavior is really interesting. The virus is delaying [the fever] so that it can replicate and become established."

There are very few examples of viruses that can control the behavior of their hosts. There are a couple in insects, like one virus that can make a caterpillar climb up to the top of a plant, where a bird can easily snatch it up. And then there's rabies, which causes lesions in the brain that induce the animal to become aggressive, passing the virus through their saliva during bites. But that's pretty much it.

"It's a great paper because it shows for the very first time the mechanism by which a viral agent in fishes is able to actually use the machinery of the organism to prevent the development of a fever," says Robert Dantzer, a psychobiologist at the University of Texas who studies the interaction between the brain and the immune system.

The other interesting piece is that the same molecules control fevers in fish and in humans.

People didn't know that the protein TNF-alpha signaled to a fish that it was time for a fever. It's the same protein that sets off fever in humans.

"The two mechanisms rely on the same set of initial molecules, which is really fascinating and unexpected," says Vanderplasschen, because the ancestors of fish and humans split off from each other more than 400 million years ago.

That means that fevers probably originated back when all animals had a fishlike inability to generate their own heat, says Vanderplasschen.

"Fever is not something bad," says Vanderplasschen. Instead, he says, it's an ancient and beautiful survival mechanism.