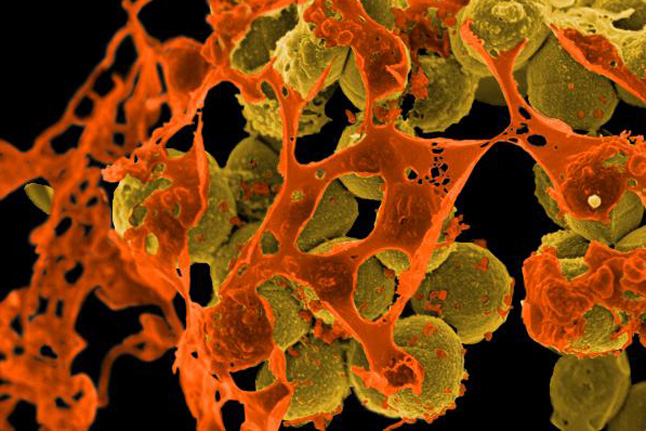 This year, the World Health Organization, the U.N., and the World Bank have called it a "fundamental threat" to global security, saying it could cause global economic damage comparable to the 2008 financial crisis, and 10 million more deaths every year by 2050.

Superbug refers to strains of various types bacteria, such asÂ E. coli,Â that are resistant to antibiotic drugs.

Now researchers are saying they found a new strain of MRSA, or methicillin-resistant Staphylococcus aureus, in people in Denmark transmitted to people through consumption of infected poultry.

Most of the time, MRSA is transmitted in places like locker rooms, gyms, hospitals, and other areas of congregated humans.

Previous research also showed MRSA to be present in pork, beef, and dairy products, though transmissions through food have been rare. Until this study, researchers mostly thought superbugs spread to farmers, veterinarians, or other people who work closely with food-production animals given antibiotics â€“ not through directÂ consumption of antibiotic meat productions.

But the new data suggests that "everyday consumers â€“ the general public â€“ are also potentially at risk," said Lance Price, one of the researchers and the director of the George Washington University Antibiotic Resistance Action Center.

The findings, published in the journal Clinical Infectious Diseases, studied 10 people in urban areas who had been infected with the new MRSA strain, and had no exposure to farms or food animals. The researchers used genetic analysis to trace the bacteria to poultry from other European countries â€“ France, Germany, Italy, and the Netherlands.

Although food is still a minor source of MRSA transmission, the study shows that the superbug is evolving, and further supports the movement to reduce or stop the use of antibiotics to promote growth in food-producing animals.

The release of the research is well timed, as the U.N. General Assembly held a high-level summit on drug-resistant bacteria this week, only the fourth time this type of meeting has happened for a health issue.

"If we fail to address this problem quickly and comprehensively, antimicrobial resistance will make providing high-quality universal healthcare coverage more difficult if not impossible," said U.N. Secretary General Ban Ki-moon. "It will undermine sustainable food production. And it will put the sustainable development goals in jeopardy."