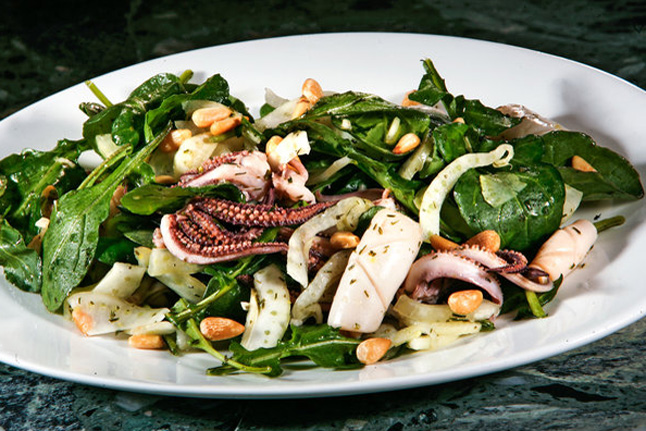 Calamari is a favorite on American dinner tables. But while the U.S. has a thriving squid industry, chances are the calamari you are eating made a 12,000-mile round trip before ending up on your dinner plate. That, or it wasn't caught in the U.S. at all.

More than 80 percent of U.S. squid landings are exported - most of it to China. The rare percentage of that catch that stays domestically goes to Asian fresh fish markets or is used as bait.

Ironically, the lion's share of the squid consumed in the United States is imported.

"Squid is a labor-intensive product," says Emily Tripp, founder of Marine Science Today, a website on the latest ocean-based research. "It's cheaper in some situations to ship it to China to be processed and ship it back."

Tripp, who recently graduated with a masters from the Scripps Institute of Oceanography, did her thesis project on California market squid, which, during non-El NiÃ±o years, is California's most valuable fishery.

In the United States we keep such good records of all of our fish and seafood. There's no comparable system in China. I couldn't follow the chain backwards.

In California, squid is an economic driver of the seafood industry â€“ it's the fifth-largest fishery in the United States by weight. Yet most of this squid is frozen and exported overseas to China to be processed and distributed to over 42 countries across the globe. It's an export market that, according to 2011 figures, is valued at $107 million. Only 1.4 percent of it, on average, makes it back to the U.S. In 2015, that figure was 0.46 percent.

"It has to do with the American desire for a larger squid," explains Diane Pleschner-Steele, executive director of the California Wetfish Producers Association. "A lot of squid that is shipped overseas stays overseas because they prefer it. They eat it over there. Our consumers typically prefer a larger squid, and so there's just a ton of squid imported into this country that comes in at a far lower price."

In the U.S., the squid that ends up on our dinner table is typically Patagonian squid from the Falkland Islands or Humboldt squid - a jumbo cephalopod fished predominantly in Mexico and Peru.

"Our squid is a learning curve," Pleschner-Steele says. "If you overcook it, it can taste like a rubber band. But in my opinion, if you do it right, it tastes more like abalone than any other squid. It's nutty, sweet and delicate."

The cost of labor is another, perhaps more significant, factor. Squid cleaning and processing is an extremely time-consuming practice. The eyes, cartilage, skin and guts need to be removed ahead of time, and it's cheaper to have this done overseas than domestically.

A round-trip freight cost to China is $0.10 per pound and labor is just $7 a day there. By contrast, California wages - with tax and health insurance - amount to $12 an hour, according to Pleschner-Steele.

Also, supply chains and markets are incredibly opaque. Pleschner-Steele suspects that as the Chinese middle-class economy has blossomed, a lot of the squid processing facilities are now based in Thailand.

Tripp says during her research, it was nearly impossible to track down where exactly the squid was being processed abroad.

"The biggest challenge was trying to find out where the squid goes when it leaves to the United States," she says. "No one wants to say where they partner. It's a bit of a challenge. In the United States we keep such good records of all of our fish and seafood. There's no comparable system in China. I couldn't follow the chain backwards."

Regardless, the narrative is the same: Californians aren't eating Californian squid. And if they are, it likely wasn't processed in California.

At Mitch's Seafood, a restaurant in San Diego committed to local fish, the owners spent three years looking for a California-based squid processor for their calamari. They eventually found a company in San Pedro called Tri-Marine.

"We have to pay twice as much for it, but it's worth it so that we can say we offer California-caught and processed squid," owner Mitch Conniff says. "Squid that's caught two to three miles away takes a 10,000-mile round-trip journey before I can get it back into my restaurant."

All Californian fish processors are capable of dealing with squid, Pleschner-Steele says. However, it's not a money-making operation because people aren't willing to pay for it.

"It has to be on request," she says. "We simply can't compete with the cost of other imported squid. "

Supporting the local squid industry is much more than just helping the local economy â€“ it's helpful from a sustainability angle as well.

Even with squid being sent on a round-trip journey across the world, the California market squid fishery has one of the lowest carbon footprints in the industry.

"California squid fishing fleets are one of the most energy efficient in the world because [they're] so close to port," Pleschner-Steele says. "Our boats can produce a ton of proteins for about six gallons of diesel fuel. ... Efficiency is key."

Further efficiency, she says, could be achieved if consumers would be keen to fork over $1.50 a pound more for California-caught and processed squid.

But the "truth is that Americans aren't willing to pay for it," she says. "If people were willing to pay the price, we can definitely feed the demand."

Clarissa Wei is a freelance journalist based in Los Angeles and Taipei. She writes about sustainability and food.