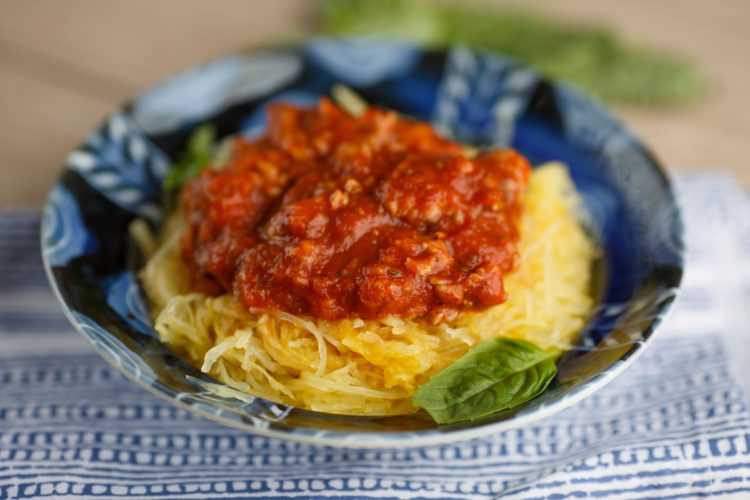 I feel pretty good about how I started the year off: more relaxation, exercise and home-cooked meals. I’m hoping to build on that momentum and carry it through the rest of the year.

I’m also making an effort to make more veggie-based meals in 2017. I love vegetables, but I typically serve them as side dishes. As a result, I don’t always get as many servings a day as I should. And, I feel so much more satisfied when I eat a main dish that features a hearty portion of veggies.

Making more veggie-based meals can be a challenge at times because James isn’t as adventurous when it comes to certain foods. When I started throwing this dinner together the other night, James said, “You aren’t making zoodles, are you?” Apparently he isn’t as big of a fan of that recipe as he originally claimed!

That’s why I love spaghetti squash. It takes on the flavor of whatever sauce you toss it in and I think it resembles and tastes more like pasta than any other veggie noodle out there. Plus, it’s so easy! You don’t need any special equipment for spaghetti squash — it turns into noodles just by scraping it with a fork.

Serving spaghetti squash with spaghetti sauce is actually the only way I’ve ever had this variety of squash. When I was checking out at the grocery store, the clerk suggested tossing it in melted butter, garlic and parmesan. That’s a recipe that’s on my list to try over the next couple of weeks.