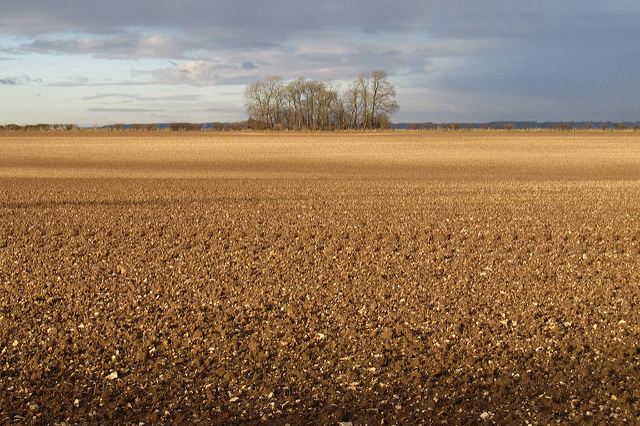 Just in case you needed a reminder: there's too much carbon in the atmosphere.

That reminder comes by way of Jacques Leslie, Los Angeles Times contributing opinion writer and the author of "Deep Water: The Epic Struggle Over Dams, Displaced People, and the Environment," and his piece "Soil Power! The Dirty Way to a Green Planet" in the New York Times Opinion section last week.

But here's another reminder: we can begin to fix our carbon problem - and by proxy, global food security - with a receptive and plentiful medium: soil.

Soil is the largest land-based reservoir of carbon on Earth. Soil absorbs carbon from vegetation as it decays and dies. The process of putting carbon back into the soil is called carbon sequestration, and it isn't necessarily a new idea.Â In the past, itÂ has been associated with injecting carbon into rock. But, as we've written about before, carbon sequestration in soil is still relatively new.

California began an initiative in 2015 to incorporate soil health into the state's farm and ranch operations. In his article, Leslie cites a four-year study at The Marin Carbon Project, a self-proclaimed carbon-farming ranch in the pastoral reaches of Marin County in California. The study that shows a one-time application of compost causedÂ a dramaticÂ increase in plant productivity and an increase in the soil's carbon.Â The rate of increase isÂ equivalent to the removalÂ of 1.5 metric tons of carbon dioxide per acre from the atmosphereÂ each year.

The Marin Carbon Project's lead scientist, Whendee Silver, calculated that if as little as 5 percent of California's grangelands was coated with one-quarter to one-half inch of compost, the resulting carbon sequestration would be the equivalent of the annual greenhouse emissions of nine million cars.

But is it enough to slow global warming?

Many scientists say no.

Rattan Lal, the director of the Carbon Management and Sequestration Center at Ohio State, estimates that soil has the potential to sequester carbon at a rate of between 0.9 and 2.6 gigatons per year - but carbon emissions measure out to 10 gigatons a year (though some some scientists believe that estimate is low).

Overall, data shows that neither only carbon sequestration, nor only cutting greenhouse gas emissions is enough to reverse climate change effects.

Like most solutions to large-scale, institutional global problems, the answer lies in utilizing multiple approaches at once - and based on the research, carbon sequestration and its holistic benefits is an excellent place to start.