Soggy Fields Across The Midwest Slow To Be Seeded, And Time's Running Out 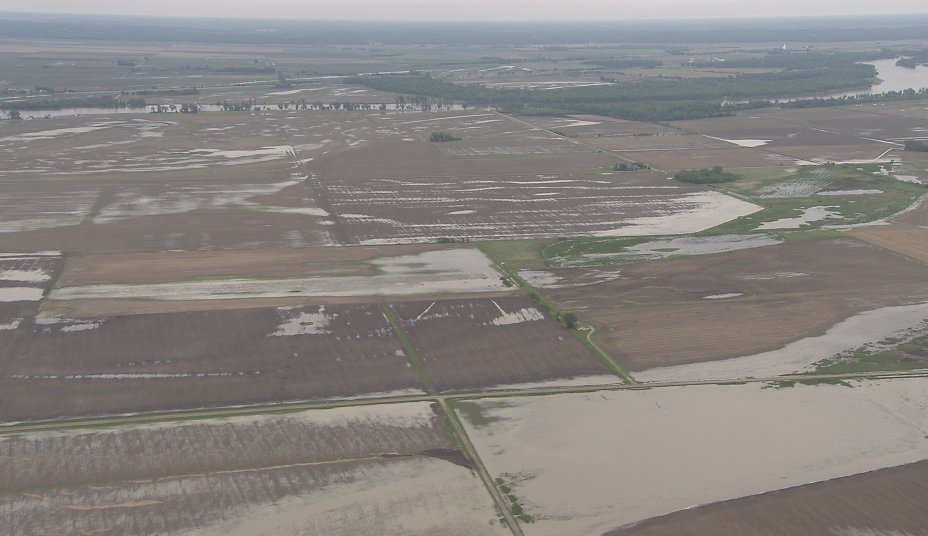 It’s been almost three months since massive flooding from the Missouri River washed over parts of Nebraska, Iowa and Missouri, but for many farmers, recovery has been slow. Continued wet weather and lingering high water has delayed planting for many growers who can’t afford to miss out on a good crop this season.

“If you walk across mud, just think about running a tractor and planter across it,” said Scott Olson, who farms corn and soybeans in northeast Nebraska. “You can’t touch it. There’s nothing you can do with it.”

As of June 10, 83 percent of corn had been planted compared to 99 percent in 2018, according to the federal National Agricultural Statistics Service. Soybeans also lagged: 60 percent compared to 2018’s 92 percent.

Both of the numbers were a marked difference from the week before. And when it comes down to it, some farmers, like Olson, just have to wait for those soggy fields.

It takes more than just a pickup truck for Olson to get a good look at his land these days. The pilot uses his small Cessna 172 to check on areas he can’t access because of high water from the nearby Missouri River, which snakes along the border of his property. When NET News talked to him about a month ago, things weren’t good and not much has changed.

“The water’s high enough now, it’s covering over the roads,” Olson said. “The other entrance into this field to the north is also underwater, so at this point in time right now I can’t even get into my farm ground down here.”

Olson has been able to plant more than 1,000 acres of higher ground, but the land by the river, about 500 acres, still looks like a big, muddy lake. He’s lagging behind his normal planting schedule, like so many in the Midwest, and running out of time.

“Corn has to have a certain amount of daylight hours and heat units to grow and produce to have a decent crop,” Olson said. “The further we get into this month of June, the less crop it will produce. Within a two-week period, this ground needs to dry out so we can get a crop in, otherwise, our crop will be greatly depleted on it.”

Dave Nielsen has been one of the fortunate ones. He farms around 2,400 acres of corn and soybeans in the rolling hills near Lincoln, Nebraska, and has been able to plant all of his crops despite the wet weather.

“There was a small window … and we pushed hard and got it done,” Nielsen said.

After a wet fall last year, lots of snow and frost over the winter, and now a soggy spring, Nielsen said his corn and soybeans could use some drier weather.

“You want the water to percolate down through and you want the crops to get a good root structure,” he said. “You want corn to kind of root down so when we do get a dry time, it’s got its root base there or if you get bad weather, you know, winds and stuff, you want a good root base on your corn so it doesn’t blow over.”

Nielsen’s family has been farming this land for over 100 years and they’ve seen many ups and downs. And, honestly, he said, the weather isn’t as disruptive as tariffs and the U.S. trade dispute with China, which he said could take years to reconnect with buyers.

“There’s going to be long-term effects. This isn’t, we drop the tariffs and the next day, we’re shipping as many beans as we did a year ago. That’s not going to happen,” he said.

With deadlines looming for deciding whether to plant so they can get tariff bailout money through the U.S. Department of Agriculture or aim for federal crop insurance, agronomists like John McNamara helps people decide when to plant. And this year hasn’t been easy, he said.

“You’ve got tariffs, you’ve got low commodity prices, you’ve got weather delays, you’ve got input prices that are high and a whole host of other things that weigh on the strategies that go into a cropping season,” said McNamara, surrounded by old corn stalks in a field near Plattsmouth, Nebraska.

If farmers don’t get seed into the ground soon, crop yields will likely fall off sharply, he said, as could insurance payouts.

“We do reach a point in June where your expectations for your average yield have got to go down because you don’t have enough calendar year to get the crop mature,” he said. “Soybeans are different than corn in that you can still plant soybeans out into the 10th or 15th of June with very little yield penalty, but everything else has to go right.”

“Just like any other business, I guess you have good years and you have some bad years, but it’s something that we’ve always done, it’s always been a way of life. I don’t want to give it up,” Olson said.

Farming is all about patience and perseverance, he said, and he and other farmers across the Midwest have an abundance of both.

Jack Williams is a reporter at NET News in Lincoln, Nebraska.