Make Your Own Sno Balls 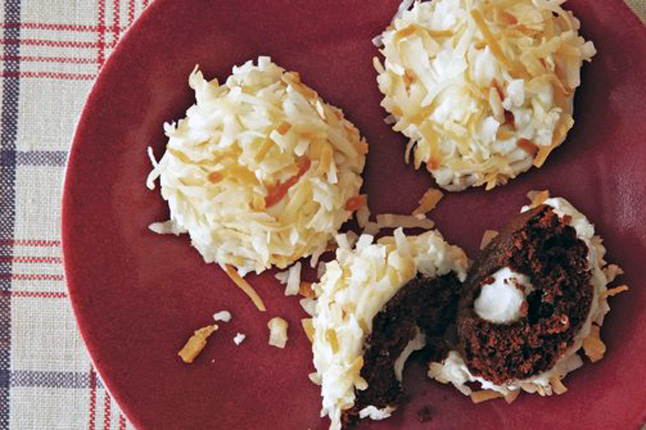 When Hostess Brands announced it was filing for Chapter 11 bankruptcy in 2012, there was a lot of anguish on the Internet about the death of Twinkies, Ding Dongs, Donettes and the like.

And it got Jennifer Steinhauer, a New York Times reporter and food writer, wondering why anyone would even want a Twinkie in adulthood?

"Well, maybe we all want a Twinkie or have access to a Twinkie because it's not just that you're losing a snack food you don't eat any more - you're kind of losing your childhood," she says.

Steinhauer usually covers Congress, but the possibility of a snack food apocalypse sent her to the kitchen for a solution. For a year she made Twinkies, Devil Dogs, Mallomars and even Fritos from scratch. She compiled her recipes for homemade junk food in a cookbook, Treat Yourself.

Among the foods she tackled was a little pink treat she had absolutely no respect for - the Sno Ball. She shared a recipe for All Things Considered's series, Found Recipes.

"The Sno Ball is the pastel cousin to everybody else. It's showing off. It's saying, 'Look at me, I'm bizarre, don't you want to take part in this?' " she says. "It's bright pink. It's not anything that you've seen in nature or food. It's kind of a holiday, but it's March and it's still there."

For Steinhauer, the Sno Ball was "a bridge too far." But she thought about how she could translate the coconut, marshmallow and frosting-coated treat into something more palatable.

Visually, she knew it had to be something that reminded Sno Ball lovers of the treat they had growing up. So she started with the shape - round - and decided to base it on a doughnut hole.

Then she took the marshmallow from the outside and turned it into a filling so the taster would get a mouth of marshmallow but "not a face of marshmallow," she says. She also pared back the coconut and made an executive decision to skip the pink food coloring.

When she brought the re-imagined Sno Balls to a school party, they were a hit with kids and teachers alike, even those who claimed to not like coconut.

"It's not an overwhelming, gross-sized treat," she says. "It's a little pop, a little fun thing."

Reprinted from Treat Yourself. Copyright Â© 2014 by Jennifer Steinhauer. Published by Clarkson Potter, a division of Random House LLC.


Reprinted from Treat Yourself. Copyright Â© 2014 by Jennifer Steinhauer. Published by Clarkson Potter, a division of Random House LLC.