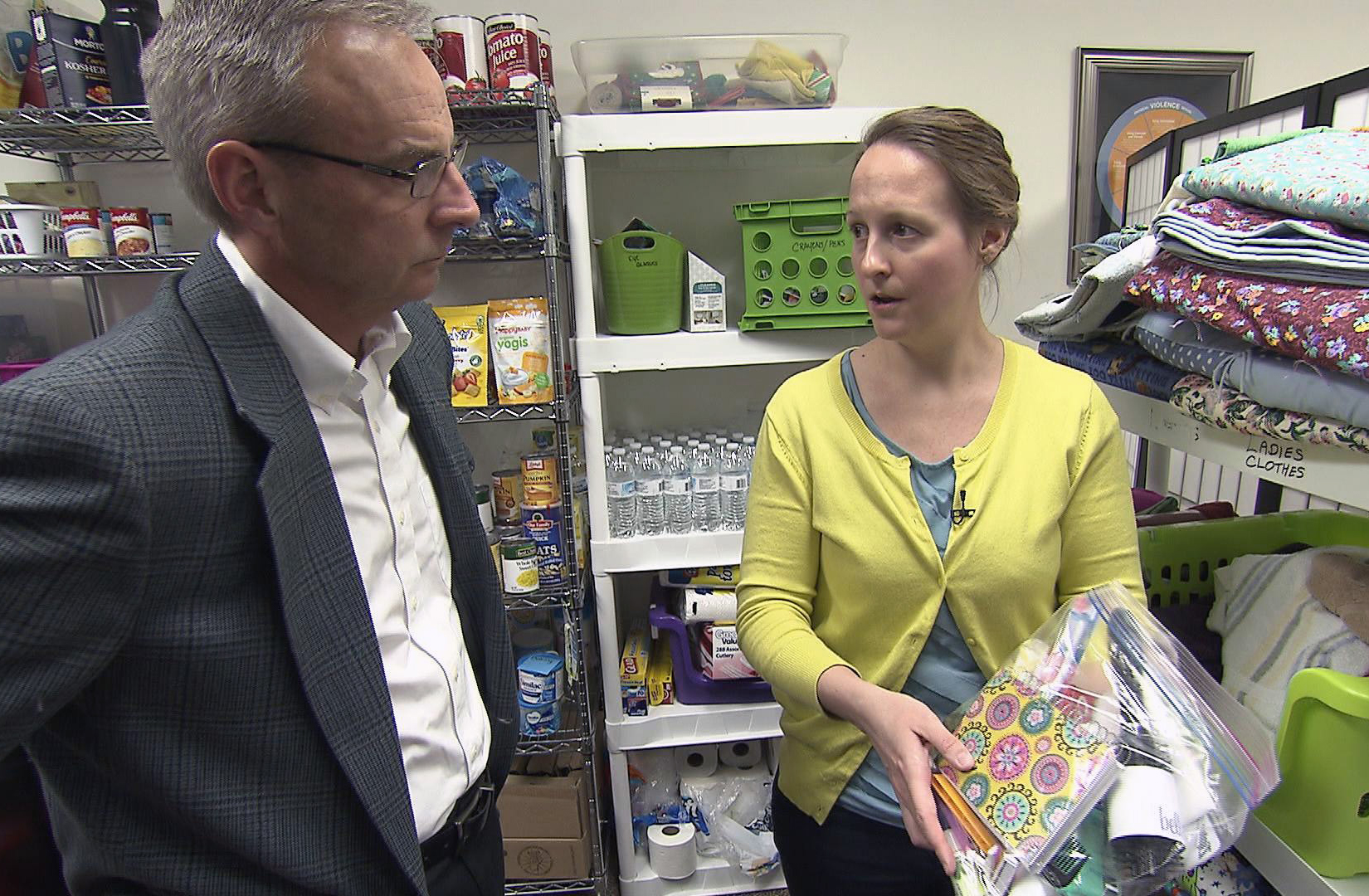 "For most of our trafficking victims this is kind of where we're going to start," says Jamie Manzer, as she gives a tour of the SASA (Spouse Abuse Sexual Assault) Crisis Center, where she worked until recently.

SASA helps survivors of domestic and sexual violence. That includes women being trafficked: sold against their will for sex. Like a lot of social service agencies, the SASA office used to be something else, but they've made the best out of oddly shaped space and rooms.

Manzer walks into the Gifts Room, which is stacked full of basic needs like soap and toothpaste, and new sweatpants and t-shirts.

"Most of our trafficking victims feel dirty, and that's more symbolic than realistic," Manzer explains, holding up a large plastic bag of items. "We will give them some version of this care pack and it's full of donated hygiene products, feminine products."

SASA is a first-point-of-contact, a place to get help 24/7 for people escaping trafficking. Manzer said one year they worked with 14 sex trafficking victims. If that number doesn't get your attention, remember: SASA isn't located in Omaha or Lincoln. It's in Hastings, Nebraska, serving more rural counties.

"I think that people are really surprised to know that this happens in Hastings, this happens in Adams, Clay, Nuckolls, Webster, Thayer, all our surrounding counties," Manzer says. "What we're typically seeing are acquaintances, partners, prostituting out their intimate partner. Most typically a male pimping out a female, though that's not always the case. What we're seeing is, it's for drugs, it's for alcohol, it's for access to shelter."

Manzer says she once helped women being trafficked in a town of just 500 people. Some of the trafficking is tied to nearby events, Manzer says, like the Adams County Fair, Kearney Bike Night and the Nebraska State Fair in Grand Island.

"For the State Fair, we did have three ladies brought on motorcycle from Daytona Beach, Florida, into the community, locked in hotels for multiple days," Manzer says. "Then, the gentlemen who had brought them there, who they thought they knew and thought were acquaintances of theirs, brought multiple men in, blindfolded them, forced them to have sex. They couldn't even tell me who they'd had sex with (or) how many times, they just knew it was over the course of several days that they were not permitted to have food. They could have water."

Commercial-sex-industry research by Creighton University's Human Trafficking Initiative found 900 people are sold for sex each month in Nebraska. Almost all are female. Some are likely involved in voluntary prostitution, but three-quarters of the people show some signs of being trafficked, according to the study. The research is based on an analysis of thousands of posts on Backpage, a classified advertising web site.

The Creighton research also shows levels of per-capita commercial sex activity similar to Nebraska in states like Minnesota, Kansas and Iowa. The National Human Trafficking Hotline says it reported 7,752 cases of human trafficking in 2016; most related to sex trafficking. A map from Polaris, a non-profit organization that fights human trafficking and runs the hotline, shows known trafficking cases in rural areas of every Midwestern state last year.

"It happens virtually anywhere," says Stephen O'Meara, who previously served as the first human trafficking coordinator in the Nebraska Attorney General's Office. "Even if you just followed the major interstate system all the way from Omaha out through Scottsbluff, there is measurable sex trafficking that occurs virtually all the time. Particularly during major events, but all the time, across all of Nebraska."

Former FBI agent Anna Brewer investigated trafficking cases for more than 20 years, including work out of the Omaha-area office. She says the Interstate drives trafficking in Nebraska.

"They can just stop at a rest stop, knowing that they don't have to move, that the business is going to come to them," Brewer says. "Again, with cellphones or smartphones, all the buyer has to do is look on his phone for particular cities, state, rest stop, exit, and see if there's a person for sale."

Fighting sex trafficking and especially getting help for those being trafficked is a challenge throughout Nebraska. A recent report described the services landscape for trafficking victims in Nebraska as "bleak." But there are special challenges in more rural areas, including front line agencies with limited resources and training. The state of Nebraska's year-old Human Trafficking Task Force is hoping to improve state service with statewide training and response teams, and by hiring regional coordinators located throughout the state.

It is a challenge for trafficking victims to privately get help in everyone-knows-everyone smaller communities, Jamie Manzer of SASA says, and where isolation of victims in rural areas is a common tool used by traffickers. Her big message? Sex trafficking is happening in rural Nebraska towns, and those being sold don't want to be.

"I think that once we can understand that piece of it, that every time you're looking at a prostitute, you're probably looking at a victim of human trafficking," Manzer says. "My hope is that that subtle demand will be affected and that by consequence, supply will dwindle."

This story was reported by NET News as part of its Sold For Sex project.