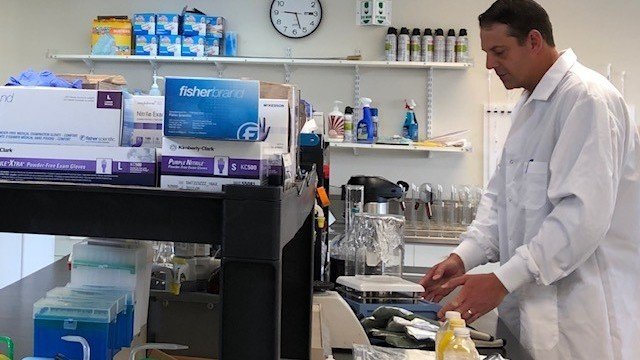 Jarret Stopforth, a food scientist and one of the founders of Atomo, reengineered the compounds in regular coffee with his partner until he felt they had created a product that had the same color, aroma, flavor and mouthfeel. (Courtesy of Atomo)

Before Jarret Stopforth takes his first sip of coffee, he adds cream and sugar to mask the bitterness.

But then, he thought, why settle for a regular cup of joe? So the food scientist decided to reengineer coffee, brewing it without the bitterness — or the bean. "I started thinking, we have to be able to break coffee down to its core components and look at how to optimize it," he explains.

Stopforth, who has worked with other food brands such as Chobani, Kettle & Fire and Soylent, partnered with entrepreneur Andy Kleitsch to launch Atomo. The pair turned a Seattle garage into a brewing lab and spent four months running green beans, roasted beans and brewed coffee through gas and liquid chromatography to separate and catalog more than 1,000 compounds in coffee to create a product that had the same color, aroma, flavor and mouthfeel as coffee.

"As we got deeper into the process, we learned more about the threats to the coffee world as a whole — threats to the environment from deforestation, global warming and [a devastating fungus called] rust, and we were even more committed to making a consistently great coffee that was also better for the environment," Stopforth says.

The future of coffee is uncertain. The amount of land suitable for growing coffee is expected to shrink by an estimated 50% by 2050, according to a report by the International Center for Tropical Agriculture.

A concept steeped in history

Atomo won't reveal exactly what its beanless coffee is made of, but the company says it is a mixture of dozens of compounds found in food, such as antioxidants, flavonoids and coffee acids. Atomo adds caffeine to its blend.

Atomo, which is slated to release its first products in 2020, is not the first to brew coffee without beans. Other startups have made the popular beverage with foods ranging from mushrooms to acorns but have failed to gain market share.

But chicory is proof that beanless coffee can catch on. Made from the roasted ground root of its namesake plant, chicory dates back to the 1800s, when coffee shortages forced people to seek substitutes, and has since become a staple in New Orleans.

Stopforth, left, and his partner, Andy Kleitsch, had to drink (and spit out) several inferior concoctions before they felt they got the ratios right.

"When coffee importation became limited, we turned to chicory, which is, essentially, roasted pieces of wood. Never once would we have dreamed of going out deliberately to experience coffee not really made of coffee, but it worked," says Christopher Hendon, an assistant professor of chemistry at the University of Oregon who studies the properties of coffee. "We have an immense power to be able to re-create flavors that occur in a product like coffee to a level that's almost indiscernible."

Getting the ratios right required drinking (and spitting out) several inferior concoctions, and just when Stopforth and Kleitsch started wondering if their science experiment was possible, something happened.

"One of the early prototypes that we created in Jarret's garage did not have any chlorogenic acid, which is the compound that contributes to the bitterness in coffee," Kleitsch recalls. "We gave this cup of coffee to Jarret's wife and she said, 'This is what coffee should taste like.' It had the flavor and aroma of coffee without that bitterness."

A taste test at the University of Washington, where Kleitsch serves on the board of the entrepreneurship program, produced rave reviews for Atomo. Graduate student Taylor Moore tried the coffee and says, "I like my coffee with cream and sugar, but I tried it and thought, 'I could drink this black,' which would be novel for me. It was really tasty."

Brewing a market for alternative coffee

The taste test was just one method Stopforth and Kleitsch used to assess demand. Their Kickstarter campaign, which raised just over $25,000, helped the startup presell its product and draw the attention of investors. Atomo just completed its first round of funding (the total investment has not been released) but the team is confident that it'll have their still-in-development beanless coffee on the market in 2020.

"We wanted to maintain the ritual component of coffee, of waking up in the morning and putting grounds into the coffeemaker, and we wanted to replicate that scoop for scoop," Kleitsch says. They maintained the caffeine content too.

Despite the fact Atomo makes its products without coffee beans, it can still be called coffee because the U.S. Food and Drug Administration does not have a "standard of identity" or official definition for coffee.

"We'll be very clear that our coffee doesn't come from a bean. In fact, we'll be very proud to say that, and there will be truth in labeling so we're not deceiving the consumer. But because there is no official regulatory definition, we can still call it coffee," Stopforth says.

Hendon has sipped countless cups of coffee in the name of research, and is eager to sample Atomo when it hits the market. Even if it is a smooth cup of coffee, he suspects consumers might be skeptical. But he adds, "I sincerely hope that the product is excellent, and they can figure out a way to navigate the difficult space of selling a concoction of compounds that is perceived to be similar to that of coffee. The chemistry of it all is definitely interesting."

Jodi Helmer is a North Carolina journalist and beekeeper who frequently writes about food and farming.