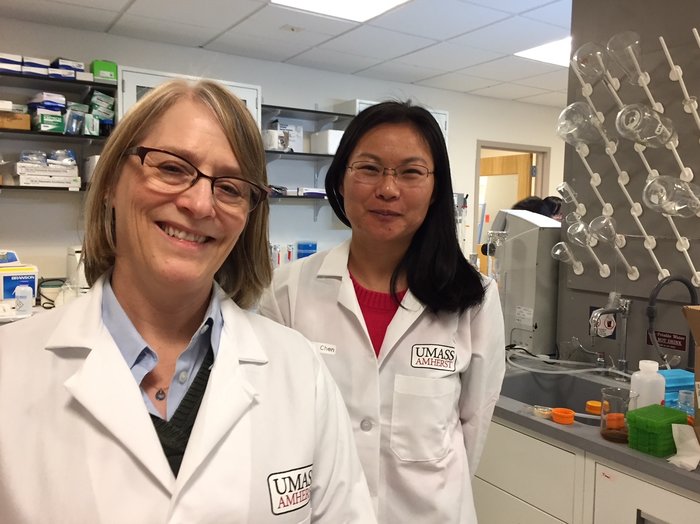 Food scientists at the University of Massachussetts Amherst have come up with a technique they say could make it a lot easier to avoid food poisoning.

The main piece of equipment? Your smartphone.

Currently, to identify the bacteria that can get you sick, like E. coli or salmonella, food scientists often use DNA testing.

They obtain samples from, say, raw spinach or chicken skin, by rinsing the food and collecting a tiny bit of bacteria from the water. Then they let that bacteria multiply over 24 hours to get a big enough sample.

All this takes time and specialized equipment.

"Bacteria can be in the very, very low numbers, and cause illness," said UMass microbiologist Lynne McLandsborough. "So that detection needs to detect low numbers."

McLandsborough is working with UMass food science professor Lili He on what they say is a much simpler - and more accessible - tool to detect harmful bacteria in food: a smartphone app that uses a $30 microscope attachment.

The device works in conjunction with a chemically-coated chip that binds to bacteria, even in tiny amounts.

Dipping the chip into contaminated water for half an hour will reveal bacteria, as Adam Salhaney, an undergraduate in He's lab, demonstrated.

"You can take this ... microscope attachment for any smart phone," Salhaney said, gripping the iPhone 7 they use as a prototype, "and you can clip it right onto the camera."

After pointing the microscope at a gold chip they'd coated with salmonella, Salhaney enlarged an image with a number of black dots set against the gold background of the chip. The dots were bacteria.

Since his hand was shaking a bit, Salhaney had to work to get the image into focus. "But I think the average consumer will be able to figure it out without much trouble," he said.

They hope consumers will eventually buy the testing kit for their own kitchens. It could also prove useful after natural disasters to test drinking water.

The UMass scientists say several food-processing companies have contacted them since the research went public last month. But it's still several years away from market.

"Right now, this is really preliminary," said McLandsborough. "We can detect bacteria with the iPhone, but we don't know if they're pathogenic - if they're harmful bacteria or good bacteria."

She said they're trying to develop a technique that will identify the exact type of bacteria.

In the meantime, for her own food safety, McLandsborough avoids raw sprouts and raw oysters, and cooks her hamburgers to medium.

A version of this story first appeared on New England Public Radio, where Karen Brown is a senior reporter.