Back To School, Part 2: Good Food On Campus 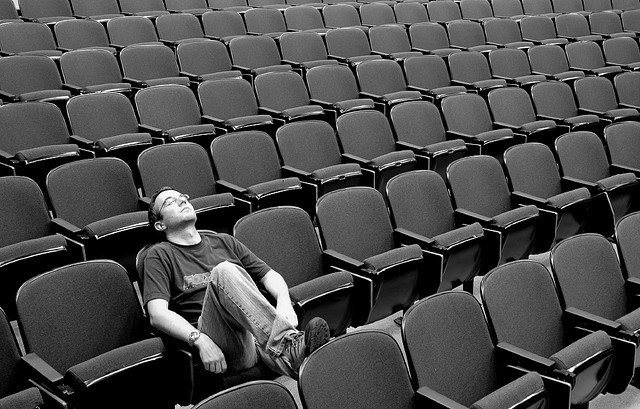 Searching For Fresh Food On Campus

Classes have started back up at universities all over the country, which means there are a slew of 18-year-olds feeding themselves, by themselves, for the first time in their lives. Thanks to meal plans, many students choose to eat their meals at the cafeterias.

While Sara Conrad is not a first-year student, she was thrown back into the on-campus lifestyle this summer. She enrolled in a graduate-level Chinese language immersion class at Indiana University that required her to sleep in the dorms and eat in the cafeteria.

Being a vegetarian makes finding a satisfying meal difficult she says. Today the salad bar was looking sparse thanks to a busted air conditioning system that required the workers to remove most of the food from the display.

For her meal, she mixed spinach and mixed greens with black olives, green onions, peas and mushrooms. She topped it with a slash of oil and vinegar. One item she was especially keen to add to her salad was some local heirloom tomatoes courtesy of the campus garden. But in spite of what a sign by the salad bar stated, workers informed Conrad that the tomatoes were only offered on special days.

Would her rather modest salad, with hummus and pita on the side, sustain her through her afternoon of classes? "Unfortunately, it has to," she says. "I don't have another break until after 6:00pm, so this is it."

Here's a salad Sara Conrad would surely appreciate. Chef Dave Tallent is responsible for this deliciously creative recipe. It uses watermelon and local heirloom tomatoes, both of which are in season in abundance right now.

The Politics Of What's For Dinner

From the cafeteria to the kitchen and now to the classroom.

Christine Barbour, a senior lecturer in the Department of Political Science at Indiana University, loves teaching new students because they have an eager, fresh look to them. She has plenty of experience doing so through her courses Introduction to Political Theory and Introduction to American Politics.

This semester, she's teaching The Politics Of What's For Dinner, which combines her professional love of politics with her personal love of food.

She tells her students right away that, unlike her American Politics class, she comes into this class with a clear bias: she is a slow foodie from way back. That doesn't mean, however, that her students should be prepared to be converted. As she tells them, "I'm certainly happy for you to leave the room with the same views as what you came in with at the beginning of the semester as long as you have really good reasons for them."

They start off the semester by keeping a food journal, which involves writing down everything they eat, where they eat, who decided what and where they ate and how satisfying the food was as a way of observing patterns.

Then they compile a food family tree, associating every member of their family with a specific dish. As for her tree, she associates potato salad with her mother. While her mother is still alive, Barbour says she doesn't remember what goes into her potato salad -- they argue about the ingredients. "I had to do what a lot of people have to do. You have to stand there and watch her do it because she has no clue what goes into it."

More: Listen to the complete conversation with Christine Barbour where she talks about the slow food movement and why eating is our most personal act.

Sandwiches make for a quick and easy lunch. For the busy college student, you can easily throw this in a backpack and munch on it between classes.