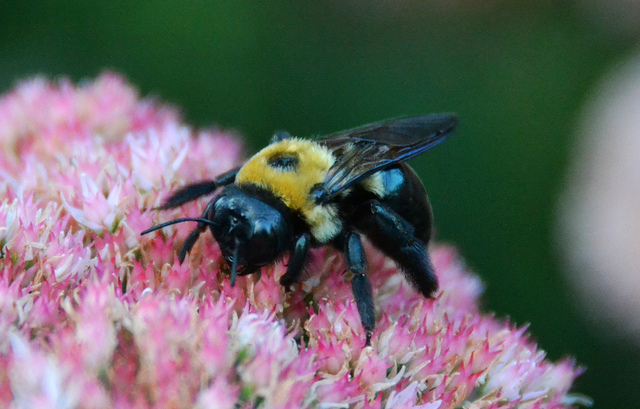 The second bee species in the U.S. has been declared endangered.

The U.S. Fish and Wildlife Service announced earlier this week it added the rusty patched bumblebee to the Endangered Species list. Once a species that thrived along the East Coast and in the Midwest, the number of rusty patched bumblebee colonies have fallen by almost 87 percent in the last 20 years. Now it's the second bee in the U.S. to be protected under federal law.

Saddened by that news? That's understandable. But it's actually good news for the rusty patched bumblebee and other rapidly declining bee species.

"Obviously, it's sad that anything has to get on the endangered list, but this really provides a great opportunity," said Dennis vanEngelsdorp, a University of Maryland-based bee expert. "When you're talking about saving the bumblebees, what you're really talking about is saving the community."

The cause of the sharp decrease in bee numbersÂ isn't certain, but scientists believe disease, pesticide exposure, habitat loss, climate change, and other factors are to blame.

The Portland-based Xerces Society for Invertebrate Conservation, which petitioned the government to list the rusty patched bumblebee as endangered, says the bumblebee's decline probably may also be caused by the spread of bacteria or viruses from commercially raised bumblebees to those in the wild.

DwindlingÂ bee numbers isn't news, nor is the evidence that the absence of beesÂ threatens both biodiversity and the global food supply.Â A studyÂ last year from a group associated with the United NationsÂ warnedÂ that an increasing number of species that aid the growth of hundreds of billions of dollars' worth of food each year face extinction.

Despite a U.S. government strategy to save the bees, seven species of the yellow-faced bees in Hawaii were the first ever bee speciesÂ declared endangered in the U.S. last year.

Three other bee species â€“ Franklin's bumblebee, the western bumblebee, and the yellow-banded bumblebee â€“ may also be added to the endangered species list in the coming months.

Rebecca Riley, senior attorney with the Xerces Society, says listing bee species as endangered is "the best â€“ and probably last â€“ hope" for their survival.