New Rules for Antibiotics On The Farm May Not Reduce Usage 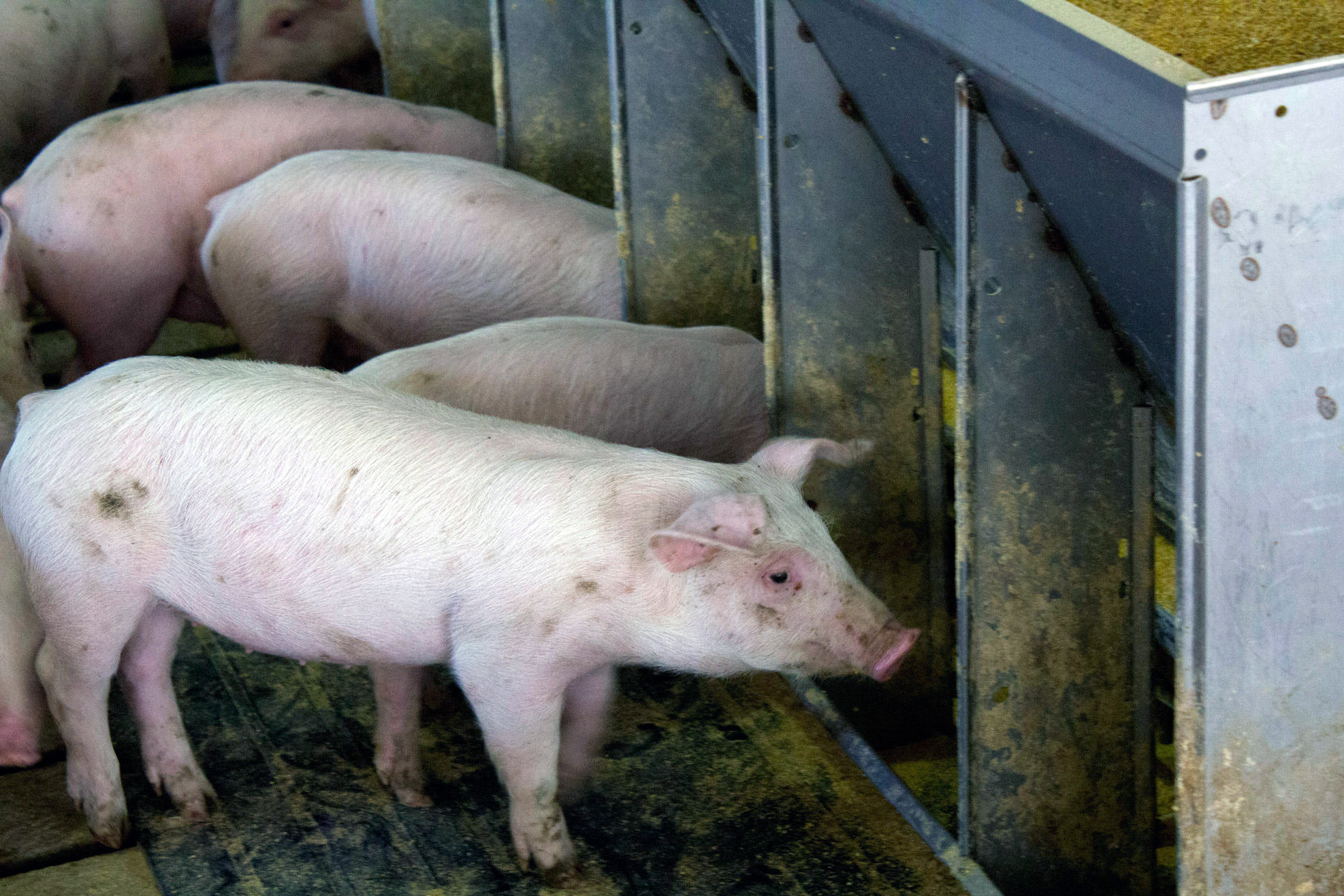 In a hog barn near Odebolt, veterinarian Paul Thomas's approach sends pigs scurrying. He watches for unusual behavior. As he walks the length of the barn, Thomas notices one of the two-month-old hogs nestled against the railing at the edge of its pen and reaches over to gently pet the pig's back. The pig shakes its head and drowsily gets up.

"He's just sleepy," Thomas says, and by the time he's spoken the words, the pig has trotted off to join its pen-mates.

In the next room, Thomas hears something different.

"I don't know if you've noticed, there's a little bit of a sneeze in here?" Thomas says. These pigs, he explains, have a bit of a sniffle.

"There's a good chance that whatever's causing that might be viral or might be environmental," Thomas says, noting that it is not a condition that requires treatment. "An antibiotic in that case is not appropriate, it's not going to do anything."

Human infections resistant to treatment by antibiotics can be deadly, and they are on the rise. Each year about 2 million people in the U.S. get sick with a bacterial infection that antibiotics can't wipe out, according to the Centers for Disease Control and Prevention. Some 20,000 of those people die. In an effort to save some of these crucial medicines, the federal government is imposing new rules, as of Jan. 1, 2017, for how antibiotics can be used to treat livestock. Critics, however, worry that the new regulations don't go far enough.

Resistance develops from what Hans Coetzee, professor in the Kansas State University College of Veterinary Medicine, calls unintended consequences. On the farm, that might come from gut bacteria in hogs or cattle that are not the intended targets of an antibiotic. If those bacteria are exposed often enough to the drug, they might eventually adapt to survive the persistent onslaught. Once that resistance is established, bacteria have quick and easy ways of sharing it.

In an urban setting, a patient flushing antibiotics prescribed for human consumption into a municipal sewer system could contribute to the emergence of resistance, with the bacteria in the sewer system playing the role the gut bacteria play on the farm.

In this barn, Thomas doesn't identify any new need for treatment of this herd, but he's already authorized an antibiotic for some 2,500 or so pigs. And that's pretty common for the animals that become our pork chops and steaks. More than 21 million pounds of medically important antibiotics were sold for use in livestock in 2015, according to the most recent government data. Thomas says because they were recently weaned, these young hogs are susceptible to a bacterial diarrhea.

"That's predictable, so we might use a VFD on a product to prevent that," he says, referring to what's known as a Veterinary Feed Directive. That's the most stringent part of the new rules for antibiotics in livestock: all antibiotics important for human health can only be obtained with this written permission from a veterinarian, similar to a prescription.

For example, piglets might get a penicillin for meningitis or cattle might get treated with tetracyclines for a liver condition. Those same classes of drugs are prescribed to people for strep throat and acne. In the past, farmers could buy feed containing antibiotics at the local feed store without even consulting a vet. Now, they can't. They need to obtain a VFD.

"I do think it will ensure that antibiotics are being used appropriately," Thomas says, "and I think that's what's important."

The new rules also ban so-called "production" uses--giving animals antibiotics so they grow faster or bigger. It's still okay to use the same drugs for prevention and treatment of diseases. Iowa State University extension veterinarian Chris Rademacher says that's important. And he adds that farmers and vets are committed to appropriate-use standards.

The air is going to hit the fan now with this thing and really nothing is going to change.

"We're humans too," Rademacher says, "we understand the concern and we think as long as we don't jeopardize animal health and well-being, we're going to do everything that we can to make sure we're using antibiotics judiciously."

But some public health officials, doctors and politicians have questioned whether the rules will bring about any meaningful changes.

"I frankly am skeptical that we're going to see any drop in amount of drug used or any big shift in which particular drugs are used," says James Johnson, an infectious disease doctor at the University of Minnesota. And he's right, the rule changes do not call for a reduction in overall antibiotic use on farms.

"My concern is not that there are other ones that will be used and they'll be a bigger problem," Johnson says, "it's, in fact, that the air is going to hit the fan now with this thing and really nothing is going to change."

Researchers have found antibiotic-resistant bacteria on farms, but Johnson says agribusiness interests downplay the connection between on-farm antibiotic use, the emergence of resistance, and illness in people.

"It's very clear that these high-antibiotic use, intensive animal operations are great breeding grounds for resistant bacteria," he says. Hospitals, day care centers and long-term care facilities, he notes, are similar breeding grounds.

Johnson also recognizes agriculture's argument that there's limited data definitively linking on-farm antibiotic use to resistant infections in humans. The FDA declined to explain just how its new rules will reduce antibiotic resistance. But, in a written statement, told Iowa Public Radio that it's expanding its data collection on the sale and distribution of antibiotics in hopes of better studying the link between farm use and resistance.