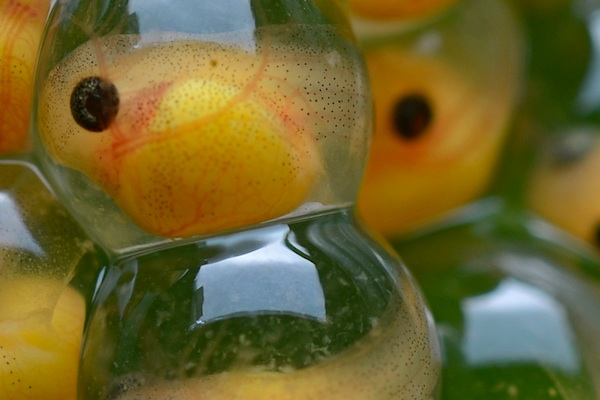 As the mercury climbs and the rains fall with the waxing of spring, weeds will invariably begin to encroach on your garden, threatening to choke out those precious vegetables.

While it may be tempting to cheat a little, to sneak unholy spritzes of industrial weedkiller when the neighbors aren't looking, a recent study published in the journal Ecological Applications may help you stay true to your organic convictions.

Exposure to Roundup, it turns out, makes polliwogs change shape.

Responding To Predators That Aren't There

Somewhere over the course of frog evolution, tadpoles developed an amazing ability: if chemicals in their aquatic habitat indicate the presence of a predator, they will grow longer tails than they would have if predators hadn't been there.

This adaptation helps the small and vulnerable amphibians swim out of harm's way more quickly, so they can survive into adulthood and reproduce.

What researchers have found, however, is that compounds in Monsanto's world-famous weedkiller not only induce this effect when no predators are around, but they actually can produce hyper tail-growth, which potentially puts larvae at a disadvantage.

The real worry, of course, is that Roundup's impacts on development aren't isolated to the little swimmers occupying the world's ponds and drainage ditches. More experimental work will need to be done to ascertain the herbicide's impact on other vertebrates -- humans included.

In the mean time, you might want to play it safe and do things the old fashioned way. Put on some old clothes, roll up your sleeves, and tell your kids to go pull some weeds.