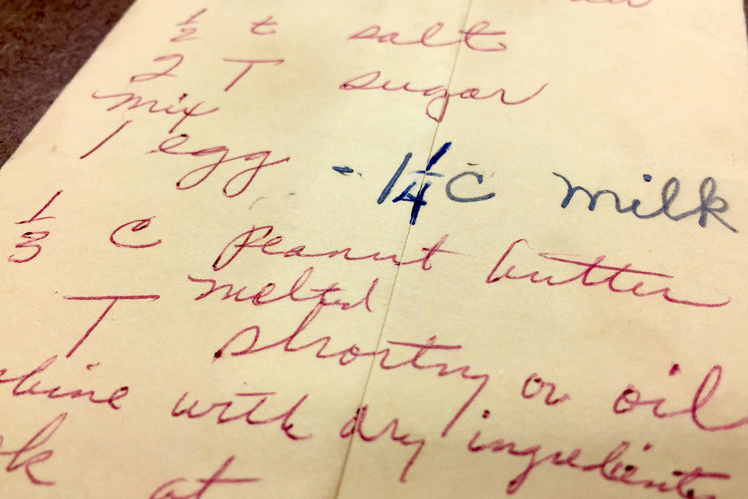 In 2015, after a 10-year legal battle, the Library of Congress released a trove of Rosa Parks' personal documents. Last year the papers were put online for the first time. They include postcards from the Rev. Martin Luther King Jr., lists of volunteers for the Montgomery Bus Boycott, and pages and pages of journals.

Buried in the Parks collection is another document that doesn't have as much historical significance â€“ but it got my attention. It's a pancake recipe, written on the back of an envelope.

At first glance, Parks' recipe for "Featherlite Pancakes" seems little more than a charming footnote, especially because of the novelty of including peanut butter in pancake batter.

But as we find in this week's episode of The Sporkful food podcast, this recipe is actually a window into a time and place, and a person most of us know little about.

"We have all these misconceptions about [Rosa Parks]," says food writer Nicole Taylor, author of The Up South Cookbook. "She's human. And the pancakes are the most human thing."

What's In An Envelope?

The fact that Parks wrote this recipe on the back of a banking envelope, and that the bank was in Detroit, tells us a lot about her life after Dec. 1, 1955, when she refused to give up her seat on that bus.

"She had lost her job for taking the stand that she did," explains Adrienne Cannon, who curates the Rosa Parks papers at the Library of Congress. "Both she and her husband were receiving death threats. And she was struggling to find gainful employment again."

This discrimination eventually forced Parks and her husband to move to Detroit, where she'd end up spending more than half her life. They always struggled financially and she had to be frugal, which is why she reused papers, like banking envelopes, for recipes.

When I brought a copy of the recipe to Detroit and showed it to Rosa Parks' niece, Sheila McCauley Keys, she was surprised: "Why would you put peanut butter in pancakes?"

Food writer Nicole Taylor had a similar reaction. "Adding peanut butter into a pancake mix, you don't see that a lot," she says. "But then the Tuskegee thing."

Or as curator Adrienne Cannon calls it, "the peanut connection."

Rosa Parks was born in 1913 in Tuskegee, Ala., home of Tuskegee Institute, where George Washington Carver gained fame for his work with peanuts. His goal was to help black farmers in the South grow a cash crop other than cotton, so they could support themselves better in the years after slavery. By the 1920s Carver was a household name, and by 1940 peanut production was second only to cotton in the South.

But the connection between African-American food and peanuts is rooted even deeper. Indigenous to South America, peanuts traveled to the Caribbean and then to Africa, where they were infused into African cuisine. Peanuts came to the American South via the slave trade.

"They were cultivated by African slaves to supplement their diets," Cannon explains. "They were also fed to hogs. But it wasn't really until Carver's publications in the early 20th century that [peanuts] become loved not just by African-Americans but by the rest of the populace."

Neither Cannon nor Taylor had heard of putting peanut butter in pancake batter before seeing Rosa Parks' recipe. But if the idea would come from anywhere, it would be from Southern African-American food traditions.

And it's quintessentially Rosa Parks. Not only did she grow up in Alabama at the same time George Washington Carver was doing his work there, but as her niece Deborah Ann Ross told me, "She loved peanut butter. That's probably what made her write this down."

Rosa Parks In The Kitchen

Parks and her husband never had kids of their own, but it's clear she loved children. She often cared for, and cooked for, her 11 nieces and nephews. Her niece Sheila McCauley Keys wrote a book that includes many of her "Auntie Rosa's" recipes.

When I visited Keys and Ross in Detroit for this episode of The Sporkful podcast, they cooked up several of their aunt's recipes - chicken and dumplings, cornbread griddle cakes, cabbage and bacon, and lemonade.

Auntie Rosa's lemonade involved simmering the lemons in water for 30 minutes, which on a hot day could feel like a long time to wait for a drink.

"She would be in that kitchen, and you were not invited in," recalls Keys. "You would just hear pots and pans. But eventually, when it came out, it was the best thing ever."

As Nicole Taylor and I cooked those peanut butter pancakes, we found ourselves thinking a lot about what it might've been like to cook with Rosa Parks. Did she wear her usual formal outfit in the kitchen, or something more comfortable? Which brand of flour did she prefer? And would she approve of putting buttermilk, instead of milk, in the batter, as Nicole did?

One thing was for sure: When we took our first bites, we found the pancakes were true to their name â€“ featherlite.

"You can taste the peanut butter. The peanut butter really hits the back [of your tongue] quickly," says Taylor. "I've had two bites without syrup. That says a lot."

"It makes me look at [Rosa Parks] as more of a 'normal person,' " Taylor says of making and eating the pancakes. "She had to eat. She wasn't just this person who was all about the civil rights movement. She cared about nurturing and feeding her family. The pancake recipe makes me feel closer to her."

Dan Pashman is the James Beard Award-nominated host of The Sporkful podcast, which is available in Apple Podcasts, Stitcher, or wherever you get your podcasts.