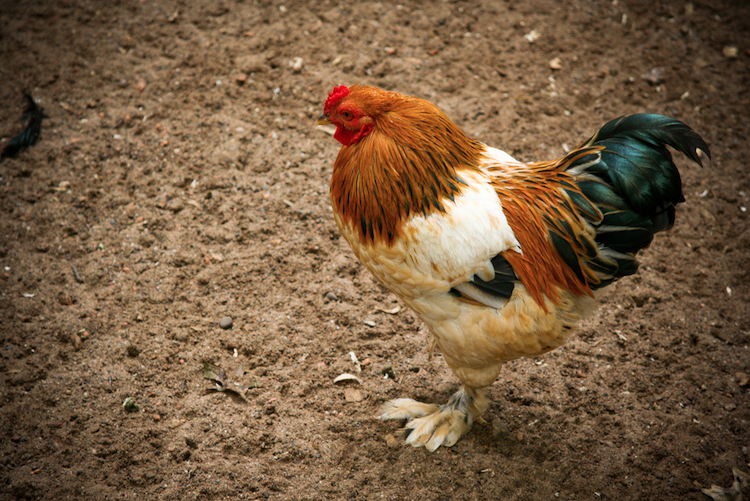 My daddy left home when I was three

And he didn't leave much to ma and me

Just this old guitar and an empty bottle of booze.

Now, I don't blame him cause he run and hid

But the meanest thing that he ever did

Was before he left, he went and named me "Sue."

It happens innocently enough. You get your six-to-ten chicks from the hatchery -- a suitable mix of breeds to satisfy your desire for variety and color in the backyard -- and you name them like pets.

You anticipate these adorable little chicks growing into egg-producing hens, and the speed at which they grow is just amazing. They're growing more feathers every day, their little combs are beginning to develop, and their legs are lengthening. It's all very fun and exciting. Fun, that is, until the day little Sue emits the strangest sound like a strangled screech. Oh dear, its a crow!

It's not uncommon for males to slip past the folks at the hatcheries who determine the sex of chicks. The laws of nature being what they are, the breakdown of male to female chickens is about fifty-fifty. But because most backyard poultry owners only want females, the market for males is not very big.

I've gotten a call more than once from a rattled owner of brand-new chicks: "What do I do now? I can't keep a rooster!"

What are you to do, especially if you live in a city that does not allow roosters? (Roosters don't crow just at daybreak, but can do so at just about any time.)

Don't Worry, There Are Options

There are a number of options you can consider if you don't want to keep a male bird. Some may not be ones you like considering, but tough choices come with the territory of raising chickens -- even if all of yours have names.

1. Consider an ad on Craigslist. I've seen several "Free rooster to good home" ads in the past few weeks. There are people out there who might need a rooster of the same breed that you have, or they may simply like having a rooster crowing about the property.

However, they may also want to gather a collection of roosters that will eventually become Sunday dinner. This is a fate that many male chickens meet, and it's wise to keep your mind open to this possibility.

2. Ask your poultry friends if they would like an extra rooster. The same reasons for taking a rooster that I listed above might apply to poultry people who live on a bit more land. I recently gave about ten young males to a family in the country who were interested in letting the males free range until they reached an age when they could become food.

3. Check out the "Wanted" or "Farm" sections of your newspaper's classifieds. I actually saw an ad in which a person was looking for a male Black Australorp. Perhaps he wanted to start a flock and needed a male to get things started. You just never know. Little Stan's breed might be just what the neighboring farmer wants.

3. There are groups that dedicate themselves to taking in wild animals and birds, and they often need food for their young owls and hawks. I spoke with the director of our local group, Wildcare, and she assured me the birds are euthanized humanely before being offered to the young raptors. While I found it ironic that I spend most of my time trying to keep hawks and owls away from my chickens, it was nice that the extra males could go to good use.

4. Think outside the box. I read a story about an artist who keeps nothing but roosters, and thinks they are so beautiful that she paints them and sells her work all over. Someone like this might be a perfect candidate to take your exotic-breed chick that was supposed to be a female.

So although it can be dismaying to the new backyard chicken owner to find they have a male in the flock, there's no need to panic. Depending on what your tolerance is for little Stan's final home, it can be possible to move him to new digs rather quickly.