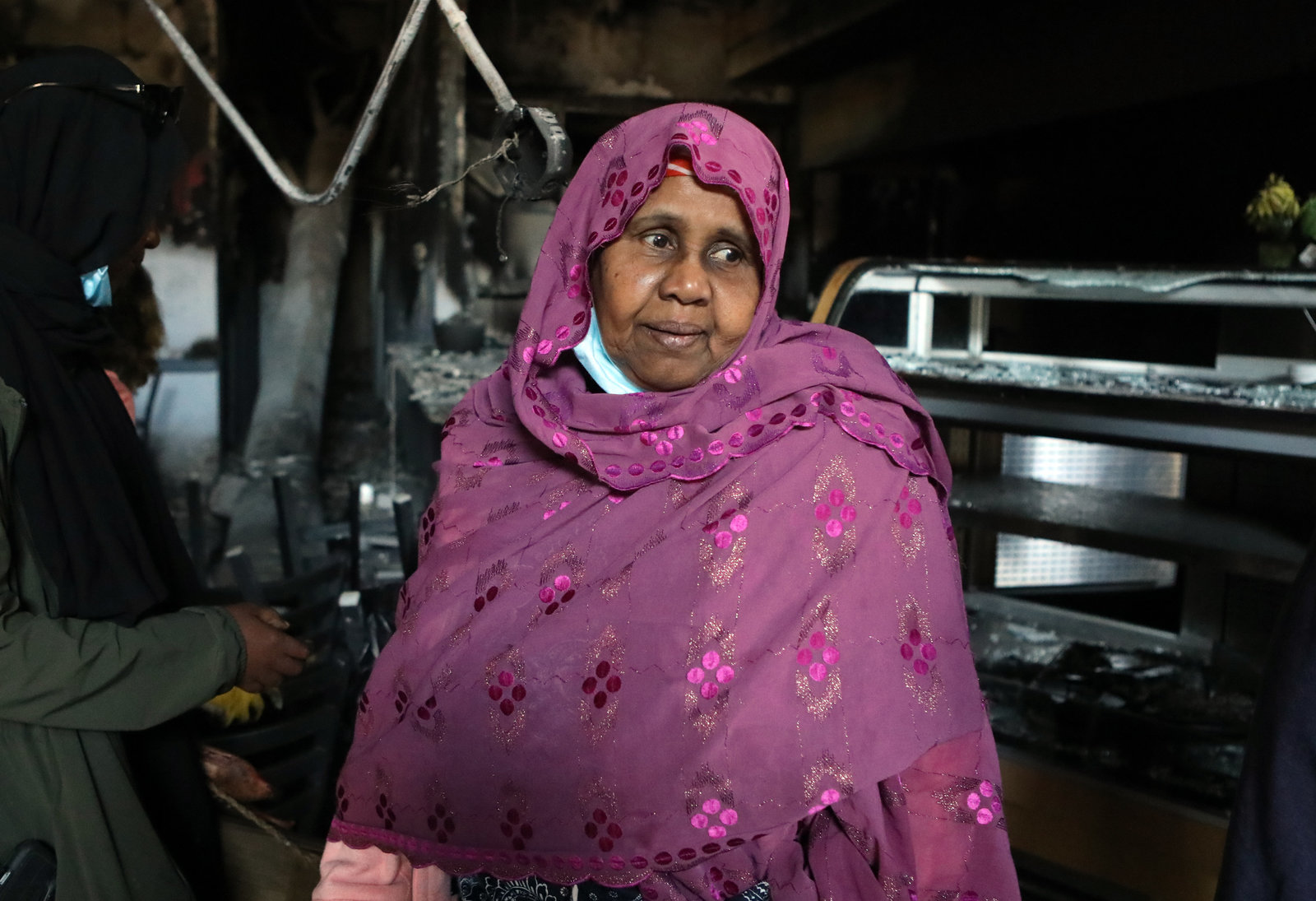 Safia Munye looks over the remains of her restaurant, Mama Safia's Kitchen, on Saturday. It was destroyed last week during protests in Minneapolis. (Jim Urquhart for NPR)

On the south side of Minneapolis over the weekend, Safia Munye and her family walk up to the door of what was Mama Safia's Kitchen.

A volunteer from the neighborhood walks out onto Lake Street.

"Is this your business?" she asks.

It's the first time they've seen it since fiery protests erupted among cries for racial justice and as state troopers in riot gear blocked the road to this street.

The walls are charred black, the kitchen reduced to rubble. Glass and water are swimming in puddles as community members around them work to sweep away the destruction.

Safia looks around stunned. Hers is one of hundreds of businesses damaged or destroyed in protests on Thursday and Friday night.

"Alhamdulillah," she repeats quietly. Praise God. "Everyone is safe."

"My heart is broken. My mind is broken," she says. "I know I can't come back from this. But this can be replaced. George's life cannot. George's life was more important. That man that got killed in the most inhumane way. I hope he gets justice."

George Floyd is the African American man who died after a white police officer pinned his neck to the ground with his knee for several minutes last Monday. Protests started in Minneapolis early last week and quickly spread across the country. Floyd's pleading words to the officer, "I can't breathe," are now a rallying cry for people protesting the many black people who have died in police custody.

Safia, a Somali immigrant, opened the restaurant in December 2018 with her retirement savings. In the midst of the coronavirus pandemic, she closed the restaurant and had to choose between paying for insurance and paying staff. So Safia chose her staff. That means there are no funds to rebuild. A GoFundMe page has been set up to help the family.

This weekend, she had planned to reopen as the city started easing stay-at-home orders. She spent over $4,000 on groceries and cleanup. Now that plan is gone.

Her daughter Saida nods. "This is a city in pain," Saida says.

Across the street a row of restaurants — all locally owned, black- and immigrant-owned — are all gone. But the library is OK.

In the rubble, Saida finds the sign she made for her mother when the restaurant first opened. Against the black ash the wood plaque is pristine. It reads "Mama Safia's Kitchen. Seasoned with Love."

"Because she always cooks with love," Saida says. She pulls a few more knickknacks that haven't burned.

"Most of the artifacts here, I got them from Africa," she says. "This one is from Somalia."

She puts them into a tiny pile of what is salvageable. Outside is a tower of all that is lost.

Her sister Bibi Abdullah walks in to help. She finds prayer rugs in the banquet room her mom would rent out for small wedding dinners and religious holidays.

"We can still use these," she says. "We just have to wash them."

She searches for more things she can save.

"The truth is things like this happen when people feel powerless. Something has to change," Bibi says. Her voice catches. Her body seems to vibrate with a mix of anger and sadness.

She says she hopes that these demonstrations translate to voters at the polls come November.

"It came to this because we have people that do not care in positions of power and it should not be that way," Bibi says.

She and her sister start to clear the big debris together.

Then Saida leads her mother, Safia, to the kitchen in the back so they can assess the damage. It's a tunnel of charred walls, ash and debris.

Safia gets upset and pulls away, speaking to her daughter in Somali.

"I'm sorry, I'm sorry," Saida responds in English as her mother walks out.

"She's just saying, 'Why are you bringing me in here? I don't want to see this,' " Saida says.

Saida gets quiet. She stands in the kitchen alone for a moment, staring at the charred walls. Then she joins her family outside where dozens of Minneapolis residents from across the city are working in groups to clear the rubble.

With everything unfolding, the pandemic has slipped many people's minds.

"I forgot. Have you seen me shake hands with people?" Saida shakes her head. "2020, we hear you, we see you. We went from one crisis to the next. What's next?"

Saida spends every night protesting, but also trying to protect other locally owned stores and restaurants.

At night, she cries herself to sleep. She understands the anger and desperation that are leading some to destroy buildings.

"I'm like emotionally torn," Saida says. She doesn't want destruction. "But at the same time, people are crying for help. People are saying, 'Fix this.' "

She says she hopes, from all of this pain, finally there will be change.