For Ranchers, A Grass Land Rush 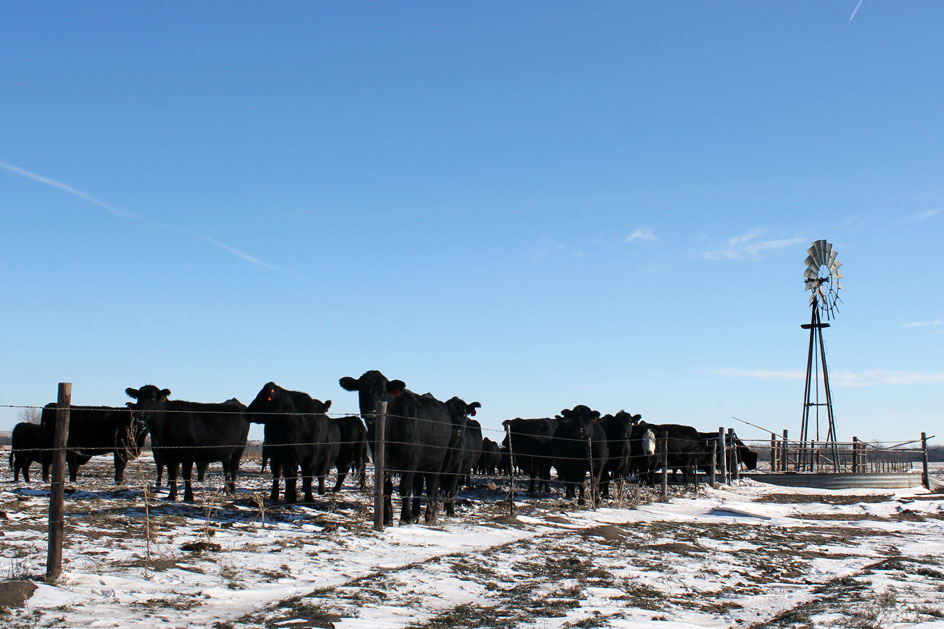 After getting pummeled by drought and low cattle prices, many ranchers are across the Midwest are eager to grow their herds. As they do, grass is turning into a hot commodity.

The national beef herd is down to the size it was in 1951. Shoppers know that beef is more expensive, which has people switching to chicken and pork. To raise more cattle and perhaps bring down meat prices, ranchers need more pasture. The trouble for many ranchers is grass has grown expensive.

Rancher Dave Wright grazes around 400 cows and their calves near Ewing in north central Nebraska with his son Isaac. On a cold, November morning he drove me to the edge of his ranch, bouncing over snow drifts and yucca plants. We got out of the truck to look at a neighboring pasture.

"Kind of looks like this one only it's on that side of the fence," Wright said. "The grass isn't necessarily greener over there. It's still grass."

But when it sold last year, you would have thought it was prime real estate. Wright went to the auction hoping to pick up a section so he could expand his own herd, but he couldn't compete.

Pasture prices have been booming, especially in states like Kansas and the Dakotas, or Nebraska where a state survey showed the value of grazing lands went up 24 percent last year, and climbed around 40 percent in some parts. Cropland is still more valuable, but Mike Fritz, editor of the Farmland Investor Letter, says pasture is catching up for a couple reasons.

"Some might call it a perfect storm where you have less grass available and now there's a time where there's a lot competition to get control of grass either by buying it or leasing it," Fritz said.

Fritz says you can trace the reduction in grassland acres to the boom in corn prices. Across the Midwest, millions of acres of grassland were plowed under to raise crops in recent years.

"A lot of this land that has been converted to cropland was marginal land," Fritz said. "It has sloping soils or poor soils that aren't really productive for crops. So when prices are really high for grains it's probably more profitable to grow crops on it."

Never probably in the history of the cattlemen have they made as much money as they've made right now.

More corn and soybeans means less grass for cows, and right at the time when ranchers want to expand.

"Never probably in the history of the cattlemen have they made as much money as they've made right now," said Richard Schrunk, who manages the sale barn at the Shamrock Livestock Market in O'Neill, Neb. "Calves are bringing probably an average of $1,500 per calf. Wasn't too long ago a $700 or $800 calf was quite a calf. And they're making double that."

Schrunk handles some real estate as a side-business. He sub-leases pasture he rents from local landowners.

"I have people call me all the time wanting grass," Schrunk said. "I mean I wouldn't know how many acres I could rent if I had it. It would be unbelievable how much you could rent out."

And all that interest is bidding up prices.

There are places where the cattle herd has more room to grow, particularly Texas and Oklahoma. Those states cut back herd numbers by the millions because of drought. Cattle numbers will bounce back as pastures recover.

But ranchers like Dave Wright are selling calves at the highest prices of their careers. At a time when you would think he's banking profits, that's not necessarily the case.

Consumers paying more than they're used to for a hamburger can understand.