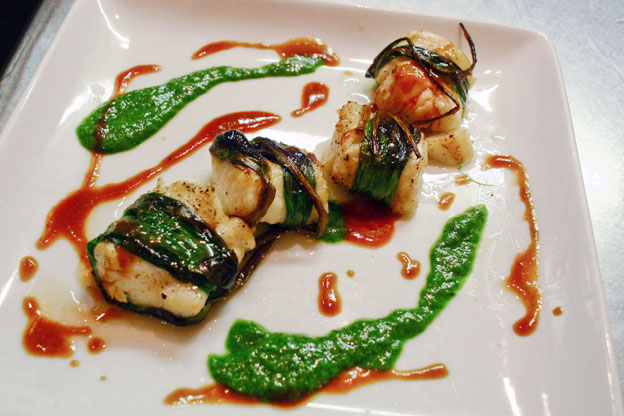 As promised, last week we gave you tips for how to hunt for ramps (a type of wild leek), and now we're giving you some recipes for three ways to put ramps to work in your cooking: pickling them, turning them into a pesto, and wrapping them around roasted fish.

The weather is never predictable in early spring, and neither are the plants that thrive during this time of year. Ramps only pop up for a few weeks each year, usually mid-April through early May, when it's still cool at night, in the 60s and 70s during the day, and rainy. As temperatures get hotter, they bolt, go to seed, and then wait for next season.

But according to Chef Bob Adkins, they are worth all the trouble it can take to find them out in the wild.

"They're a member of the onion family," he says, "but they taste like some of the most pleasant garlic and onion flavor you could ever have really."

And they're versatile because the leaves are so tender, Adkins says. " They can be pureed almost like basil for a pesto. They can be sautÃ©ed like spinach. They can even be eaten raw, small amounts tossed into salads to give an extra kick. The maroon and the white parts are more for solely cooking. But you toss them with, scrambled eggs or home fries and bacon."

Listen: Chef Bob Adkins tells you everything you need to know about foraging for ramps.

After you've cracked open your jar of pickles, Chef Orr says, you can use the vinegar to flavor vinaigrettes and sauces and then pull out the ramps and eat them just like pickles -- with a cheese platter or with smoked meats -- or, chop them up and put them in a sauce or sprinkle them on top of a roasted fish.

If you haven't had enough ramps yet, here's a super simple recipe for roasted fish wrapped in ramps. And guess what -- the Ramp Pesto tastes delicious spooned over this dish!