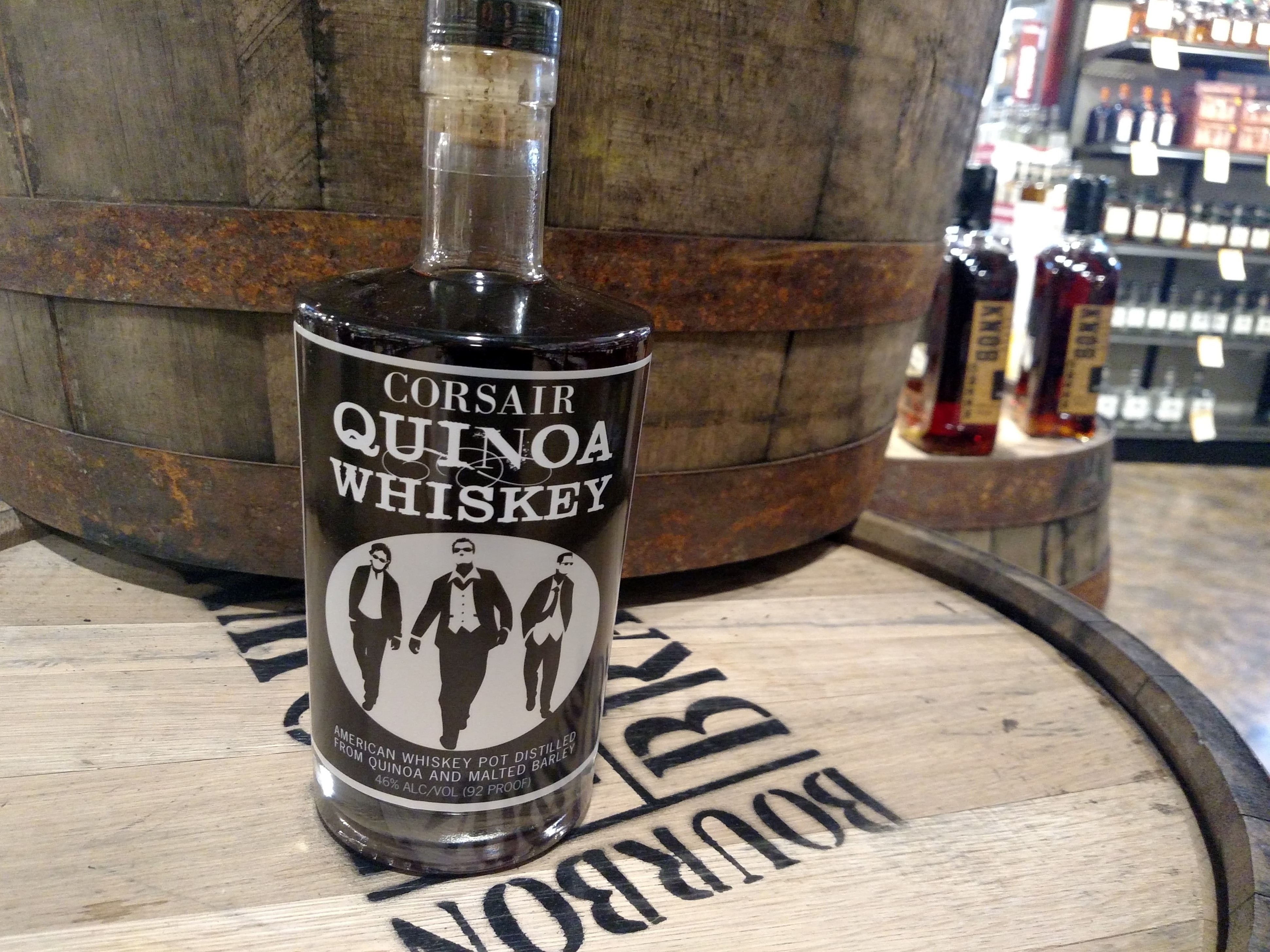 By definition, whiskey is a grain spirit. And until now, that "grain" has been limited by federal law to four specific crops: corn, wheat, rye and barley.

So when Darek Bell, founder of Corsair Distillery in Nashville, Tenn., wanted to start experimenting with alternatives, there wasn't really a playbook to follow.

"We started looking at a whole lot of grains that were coming out of sort of the health food movement, the green movement," Bell said. "We're thinking, 'What would it taste like to distill this?'"

Bell and Corsair settled on quinoa - partly, Bell said, because of its distinct flavor and partly because of the perceived health benefits (none of which, unfortunately, can really withstand the distillation process). The distillery has been producing and distributing quinoa whiskey since 2011.

Other spirits and liquor companies have been using quinoa in their products; FAIR, a French distillery, launched quinoa vodka in 2012, while several craft breweries, like Altiplano and Aqotango, use quinoa in their beers.

With a grain profile of 20 percent quinoa and 80 percent malted barley, Corsair's product is a spirit with a distinctly earthy and nutty flavor that may not immediately register on the palate as "whiskey."

And until recently, the federal government didn't recognize it as whiskey either, due to its limited definition of "grains."

At first, the Treasury Department's Alcohol and Tobacco Tax and Trade Bureau, also known as the TTB, wanted Corsair to classify the product as a quinoa rum (despite the fact that it contained no fermented cane product). Then, they suggested it be labeled as a "neutral spirit" - a clear liquid distilled from a grain-based mash that holds a high content of ethanol - which didn't really describe the crafted and aged spirit in Corsair's barrels.

"Supposedly [a representative from the TTB] called the USDA, [which] said 'Yes, these are in fact grains' and gave us the go-ahead," Bell said.

Then, in early December, the TTB took a step to officially include quinoa as a whiskey grain. On Dec. 3, the TTB outlined a new definition for what crops count as grains as part of a 132-page list of updated recommendations for the labeling of wine, beer and spirits.

Per the new TTB proposal, the list of whiskey grains now includes "cereal grains and the seeds of the pseudocereals amaranth, buckwheat and quinoa." And this is a big deal for craft distillers like Bell.

Colin Blake says this proposed change could be really beneficial for creativity in the whiskey industry. Blake is the director of spirits education at Moonshine University, a distilling education program in Louisville, Ky.

"I think it's fantastic for the category that people can start making what can be classified as whiskey with these new grains," Blake said. He said he's already had people in his classes asking about distilling with alternative grains.

Clay Smith, who used to be a distiller for Corsair and now works at Moonshine University, said he feels these questions are essential to developing the industry.

"[They ask] 'Have you made this? Have you done it with this?'" Smith said. "And maybe 70 to 80 percent of the time, we're like 'yeah, we've done it and here's why you shouldn't do it,' but those are always the most fun questions from [our distilling students]."

And according to Blake, distillers are going to have to keep asking those questions as members of the industry start experimenting more with those grains.

"The inclusion of these new grains is doing to be a tremendous time of learning because people have centuries of experience in how to process and make the traditional four grains into whiskey," Blake said. "But all of the sudden - buckwheat? No one has really done it. It's rock hard."

But distillers like Bell at Corsair are looking forward to the challenge.

"If I'm making a painting, I want to have as many colors in my palate that I can paint with," Bell said. "So as I'm making these whiskeys going forward, maybe it's just a small touch of oatmeal that adds a little more to the body of the whiskey, or just a little bit of quinoa that adds something different."

The public comment period for the new TTB regulations is open until March 2019. After that, the TTB will review comments and consider changes to the proposal, which will then be subject to approval by the Treasury Department. There is no set timeline for final approval.