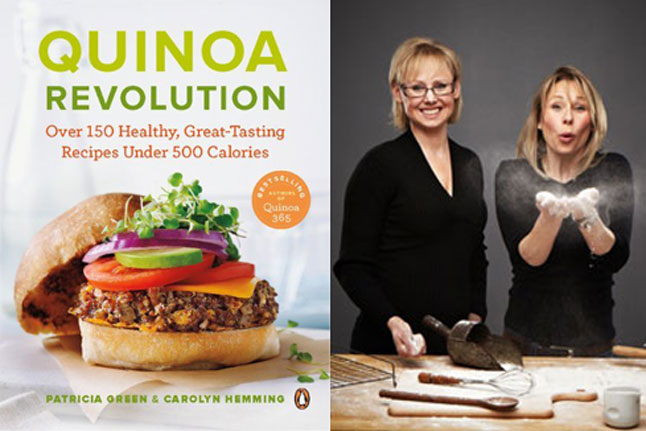 Author Carolyn Hemming and her sister Patricia Green are quinoa lovers from way back, so they're enjoying the recent trendiness of the edible seed.

"It's kind of taking the culinary world by storm," says Carolyn. She says that quinoa is not only great tasting and versatile, it'sÂ a complete protein, gluten-free and high in fiber. "It's full of vitamins and minerals, great for vegetarians, a complex carbohydrate. The list goes on!"

Carolyn and Patricia fly their quinoa flag proudly, having branded themselves as theÂ Quinoa Sisters. Their latest publication, Quinoa Revolution, is their second cookbook dedicated to the seed.

I spoke with Carolyn from her home in Toronto.

I flipped through the cookbook and I stopped on page 159 on the Black Forest Goat Cheese Brownies.

That's a favorite of mine. It is delicious!Â That's one of the recipes that at the photo shoot, the photographer and the food stylist fight over.

I had to search the ingredient list to find out where quinoa was. It's the quinoa flour. What are the benefits of that over traditional flour?

You get the same nutrition in quinoa flour as you would in quinoa, but it's gluten-free.Â You incorporate a binder because it does need that if it doesn't have the gluten. Usually there's eggs or something else of that nature in the recipe that help to bind.

It's just like eating a beautiful chocolatey brownie and you would not know that instead of regular flour, there's quinoa flour.

I'm staying in the dessert section because that's where my mind is. The recipe on page 182 uses quinoa as a garnish for berries and yogurt. Can you explain how this tastes? I'm skeptical.

It really is a lot of textures in this one. You've got black quinoa and you've mixed it with fruit and yogurt. It's just a nice complementing texture.

Quinoa's flavor is so neutral, so it's one of those things that just works in many applications.

You mentioned black quinoa. What's the difference between black, white and red?

The nutritional profiles are relatively the same. The ancient Incas might say that the black was better for your liver. The cooking difference might be that the white or golden quinoa will fluff up a little bit more and be a little bit more tender, where a black or a red quinoa will cook up and have a texture that's more like a wild rice with just a bit of crunch.

I'm hoping you can talk us through how to sprout quinoa.

You want to make sure everything is clean, including your dish and the lid. We suggest you never use plastic because it can hold residual bacteria.

Quinoa germinates in 2-4 hours, so you can sprout it really quickly and have small sprouts or you can let it sprout for 8 hours and have a longer, more substantial sprouts.Â If you're putting it in a salad or a sandwich and you want it to look a little more dramatic, you might want to grow it a little more, but it's the same living enzymes!

What about a great recipe for quinoa newbies?

One of my favorites for beginners would be a pudding. Cook the white quinoa, purÃ©eÂ it in a blender or food processor with some milk or water until it's super smooth.

We include a mocha pudding recipe in the cookbook. The quinoa is cooked in coffee and then purÃ©edÂ with milk and cocoa. It makes the most delicious, decadent pudding!