This Little Piggy Cookie Is A Sweet Mexican Find 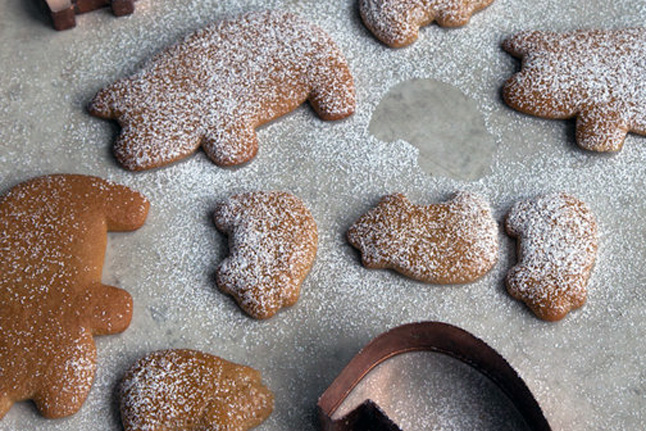 Mexican Piggy Cookies are known by many names - cerditos, cochinitos, marranitos or puerquitos. Sweetened with unprocessed cane sugar and honey, and spiced with cinnamon, the cutout cookies puff when you bake them.

A few years ago, Mexico-born chef Pati Jinich had never heard of them. But after numerous recipe requests and a chance encounter with the cookies in her home country, they've become a family favorite. She shared a recipe for piggy cookies for All Things Considered's Found Recipe series.

Jinich is the host of the PBS show Pati's Mexican Table, and has written a cookbook with the same name. The former political analyst is now a culinary ambassador of sorts for the Mexican Cultural Institute of Washington, D.C. Mexican expatriates like her - who are hungry for home - often ask her for regional recipes, and she does her best to comply. But piggy cookies left her stumped.

She started hunting for a recipe but came up short - none of her friends or relatives had heard of the cookies, either. Ultimately it was happenstance, not research, that brought the cookies into her life. While on a road trip from Mexico City to Jalisco, Jinich and her husband stopped at a gas station. While refueling, she noticed a woman sitting at a tiny stand nearby.

"[She] seemed to be selling breads, little fluffy breads," she says. "And I walked to her, and what do I see? They're piggy-shaped! I was ecstatic."

"They just taste so sweet, in a mellow way, and comforting because they're so puffy and fluffy and like nothing I ever tasted before," she says. "But at the same time, it tasted to me like my home country."

After the gas station, Jinich started noticing the cookies everywhere - not in big cities, but small towns. Still, she couldn't find a recipe. "Everybody cooks by eye; you add a little, you mix a little," she says.

Once home, she set to work crafting a recipe. When she had it nailed down, she sent it to those expats who had requested it.

"I got such beautiful emails back. Not only did it enrich my home and my family ... but it also brought me closer to my home country because I'm learning all these things I didn't know, and I'm trying all these recipes that I didn't know while I was there," she says.

The only downside? Jinich, mother to three boys, now has to carefully calculate when she bakes the cookies.

"I make it by myself when the boys are not at home, because they'll start devouring this dough," she says.