In A Pickle: Simple Guide For Preserving The Summer Harvest 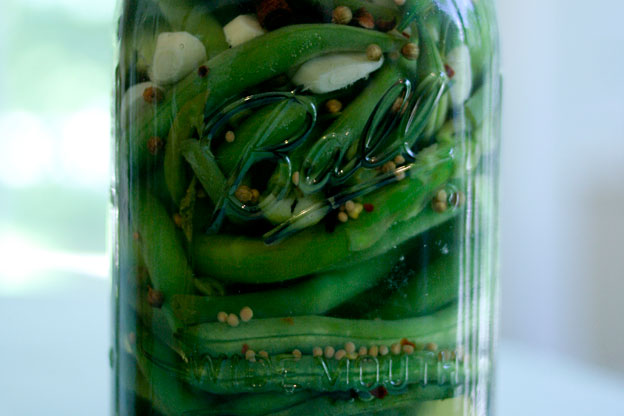 We're enjoying the bounty of the growing season now, but it's not too early to look ahead to the cold months, when your garden goes barren and many farmers markets close up shop. One way to preserve vegetables is by pickling them, and we'll show you how to get started on the podcast today with recipes for pickled peppers, green beans and asparagus as well as some pickling tips from two experts.

Amy Jeanroy: Getting Started With Pickling

Earth Eats contributor Amy JeanroyÂ tends a large garden on her farm, and throughout the growing season, whatever fresh vegetables she's not feeding to her family or selling at the farmers market, she pickles. As she explained, the process is pretty straightforward.

"First of all, choose really fresh foods that you're going to pickle," Jeanroy says. Â "Then you mix your brine solution, and that's either sweet, salty or dilly, pack your jars that are already sterilized with your vegetables, do that pretty tightly, and pour the brine over them cap them and put them in a hot water bath â€“ which is just boiling them with hot water to seal the jar. And then you let them sit usually before you eat them."

Jeanroy's favorite thing to pickle is zucchini. "The reason that I like it the best is because you always have tons of zucchini and you never have enough cucumbers. So, I end up making pickles out of my zucchini."

"You get the ebb and the flow of course of the yearly growth of everything, and there are times of the year when I have tons of tomatoes and times when I have tons of other things all at once," Jeanroy explains. "But, in the dead of winter when you're eating just from the pantry, it gets a little bit boring. So I like to include pickled things just because it brings kind of a nice, crisp flavor to the same thing you're eating over and over again."

Learn More: Listen to our complete interview with Amy Jeanroy and try her recipe for pickled Egyptian walking onions.

When you pickle hot peppers whole, you can stick them in a pot of rice and it'll give a nice perfume to the rice without being overheated. You can also use them all throughout the winter time to make ceviches, to make all kinds of marinades, or throw some into a barbecue sauce or pasta sauce.

These green bean pickles are simple, it's all basically the same procedure as with the pickled peppers. Â You can use these bean and asparagus pickles on sandwiches, toss them in pastas, use them in vinaigrettes for salads, serve them on top of grilled salmon, chicken or pork... any number of tasty uses for these!