Less Is More When It Comes To Food Choice 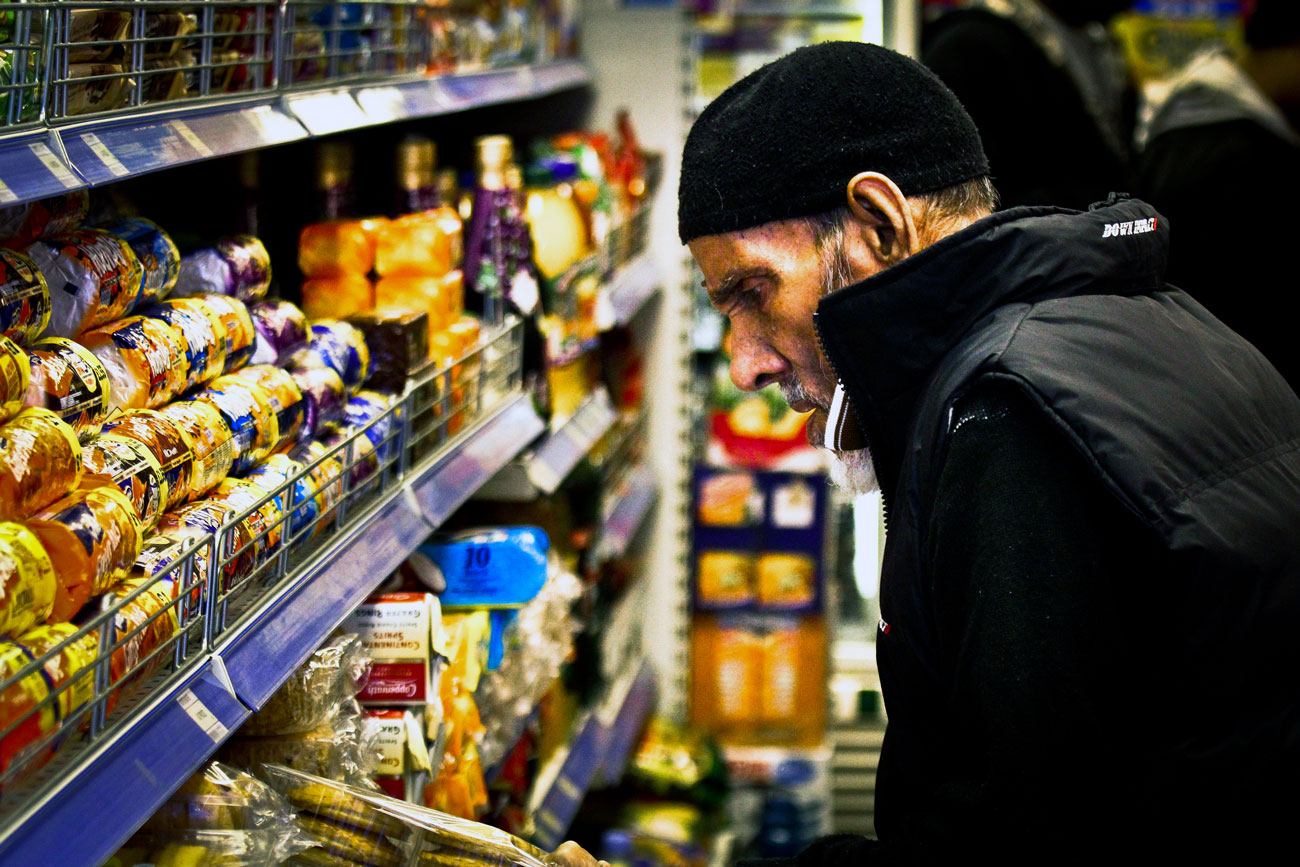 As a kid, Peter Todd liked playing with food, creating new culinary concoctions. As an adult, he's playing with food in a different way. He's a professor of Cognitive Science, Psychology and Informatics at Indiana University. In his research, he examines what influences our food choices. (Nutritional labels, for instance… not so much.) He's also experimenting with a smart shopping cart that would give customers information about their daily grocery haul.

I caught up with him following his talk at Big Red Eats Green.

CORRIGAN: One of the things that really struck me was, as consumers, we're bombarded with all of this information when we're at the grocery story trying to pick the package of cream cheese we want to buy: the color of the label, where it's located in the store, the calorie count, what the ingredients list includes. But what I took from your talk is that as consumers, we actually use only a couple bits of information to make choices in the grocery store as compared to all the different bits of information that are thrown at us.

TODD: That's absolutely right. That when we are confronting our common, everyday food choices, most of the time we're making those choices on the basis of habit and familiarity. So, we don't need to use -- and we don't use -- the new information that might be available to us. People very rarely pick up a package and look at the ingredient list or the nutrition information on the side and they most often are looking for things they've already had before, and so all it takes to do that is name brand recognition or knowing where in the store they had bought the item the previous time they were in there.

The way it works is that people believe there is a problem of too much choice, that we can be overloaded by having too many options to choose from. But when people are facing lots of choices in food, products or in restaurants, people don't usually just give up in frustration and walk out. They do make a choice somehow, so they're able to simplify things down enough, including choosing based on habit, so that they don't get overwhelmed by having too much choice.

When we are confronting our common, everyday food choices, most of the time we're making those choices on the basis of habit and familiarity.

CORRIGAN: I don't know if you can speak to this, but as people who are trying to change the way people eat -- get away from high salt, high fat, highly processed foods, go to more local foods -- if people are just going to buy from their habits, are we fighting a losing battle?

TODD: So what needs to be done then is to somehow inspire or shock people into seeing the choice now as a new, different thing that they need to do/make in the store. So, somehow change the situation so that they do become conscious of the choice and go beyond looking for what they always get. One way of doing that is to inform people that there are new products and that they should have a look at them. So, having displays in stores with something new that people haven't seen before, that's an occasion on which people will investigate more, will try to get more information. They might try a free sample. They might look at the ingredients on the package and see, okay this new thing, is it something I want to add to my diet? Another way of doing that is to try to catch people's attention by changing what the label looks like. So, they pick up a familiar package but now there's something different on it, like suddenly a stop sign, which is displaying to them some information about the contents, the nutritional contents of the food they might be interested in. If that's catching the attention enough, then that can be a way of getting information to people to change their decision then, which again will probably become a habit after that, and so then they'll start to ignore that new information the next time they're there.

What Is Good Choice?

CORRIGAN: I was reading a little bit through the study you published, and it said something along the lines of consumers can make good choices with less information. What is good? What does good choice mean?

TODD: Good choice can be a difficult thing to try to define exactly because there are different dimensions that we can measure goodness on, and different people will be using different dimensions on different occasions. So, good choice for entertaining may involve different kinds of foods from a good choice for making your child's lunch or for having a daily breakfast. But, the kinds of things you could make a good choice on the basis of would be nutritional content in some cases. It would be special good taste in other cases, like when you're entertaining. It could be the appearance if you're trying to make a dish to impress someone else. So, overall there are these different dimensions that we could measure goodness on, but how we go about judging that goodness can still -- on each of those dimensions -- involve rather few pieces of information.

CORRIGAN: When I heard you talk about this the other thing that popped into my mind was a comparison with what was happening in New York City with the soda ban, and how government officials were basically trying to affect change from the top down and restrict how much soda people could drink in New York City. Your research seems to come at that from the other way -- figure out how people make the choice to drink soda, maybe why (although I'm not sure why is part of the scope of this study). Can you respond to those two different ways of going about this?

In order to make top-down efforts be effective, we believe you need to know what is going on from the bottom-up in terms of how people are making their decisions.

TODD: Absolutely. In order to make top-down efforts be effective, we believe you need to know what is going on from the bottom-up in terms of how people are making their decisions. So, if you have the wrong perspective on how people are making their food choices, then that can lead you to make the wrong policy decisions for how to influence those food choices. For instance, if you believe that people will use whatever information is available to them to guide their food choices, then that can lead you to believe that putting more information on the package is going to be a good way of influencing those decisions. Under that model, people would pick it up and turn it over and read it and make an educated, rational choice each time they're going to the store. But that isn't how people usually are making food choices, as I mentioned before. So, you need to take into account the realistic way that people under time pressure are making their food choices, and in that case, figure out what is a way that you can make a small change to their food environment -- which may be packaging, may be placement of goods -- that will enable them to make a fast choice, but now a different choice from what they were making.

TODD: Absolutely. That's a project that came out of collaboration with Yvonne Rogers, who is a professor here in Informatics, who is interested in helping to change how people make decisions and act in the world through technology, and through making pervasive technology. So trying to imbue the environment with intelligence and reactivity to human action. So, we got together thinking about what would be some ways that we could use technology to influence people's food decisions in the supermarket. And again, rather than taking this perspective of let's put more information in people's hands, like give them an app where they can scan a product that they were thinking about and the app would tell them yet more facts about it -- that seemed the wrong way to go. We wanted to figure out how to reduce the information to even a single dimension that people might find valuable. And also, rather than give people information about each individual product that they're considering, give them information about the diet that they are choosing for, say, the whole coming week. So, the whole set of things they're putting in their shopping cart.

Rather than taking this perspective of let's put more information in people's hands... We wanted to figure out how to reduce the information to even a single dimension that people might find valuable.

The way that we have gone about doing that is by giving people an ambient source of information about the entire contents of their cart. For instance, make the handle of the shopping cart glow with different colors depending on some aspect of the content of the shopping cart. So, if you're trying to keep track of the food miles of the products you're buying, you can have the cart handle glow green when on average the food miles of the thing you're buying are low, they're mostly local. It can glow amber when they are coming from over 100 miles away on average, and can glow red if you're buying mostly bananas and things imported from overseas. Through that single piece of information conveyed in a way that can be in the background, or that you can pay attention to (this ambient display), we hope that that would be able to nudge people's behavior, guide them to make better choices in the supermarket as they're shopping.

Embarrassed In The Aisles?

CORRIGAN: We're talking about this from the research angle. Your ideas on actually getting this into stores, could that be a reality anytime soon?

TODD: That's something that is probably more of a challenge than doing the research in the first place, because you bump up against the interests not only of the consumers, of whether or not they want to use it, but the interests of the stores, if this is going to be something which is going to attract people to shop in their stores or it may scare people off. People may not want to be advertising with this glowing red handle that they're pushing around on their shopping cart that they have a high food mileage content in their cart. So, those hurdles are things that we still need to overcome before this idea can get into widespread use.

CORRIGAN: I see the feeling of shame as a possible way of encouraging people to eat "better," because driving a shopping cart around the store with a glowing red handle, you're right, would probably be pretty embarrassing for a lot of consumers.

TODD: It could be, exactly. When those kind of social information cues can be imposed from above, like in energy markets where people get their energy bills that have a smiley face when they are using less energy than their neighbors and a frowny face when they're using more energy than their neighbors. That isn't going to be something that's particularly shameful for people, and also not something an individual household will be able to necessarily choose because they can't decide, I'm just going to change where I get my energy from. But, in deciding where you're going to buy your groceries from, if one chain uses this kind of technology and another chain doesn't, it may scare consumers away from the one that is using this kind of technology if they don't want their habits to be so blatantly obvious to the people around them.