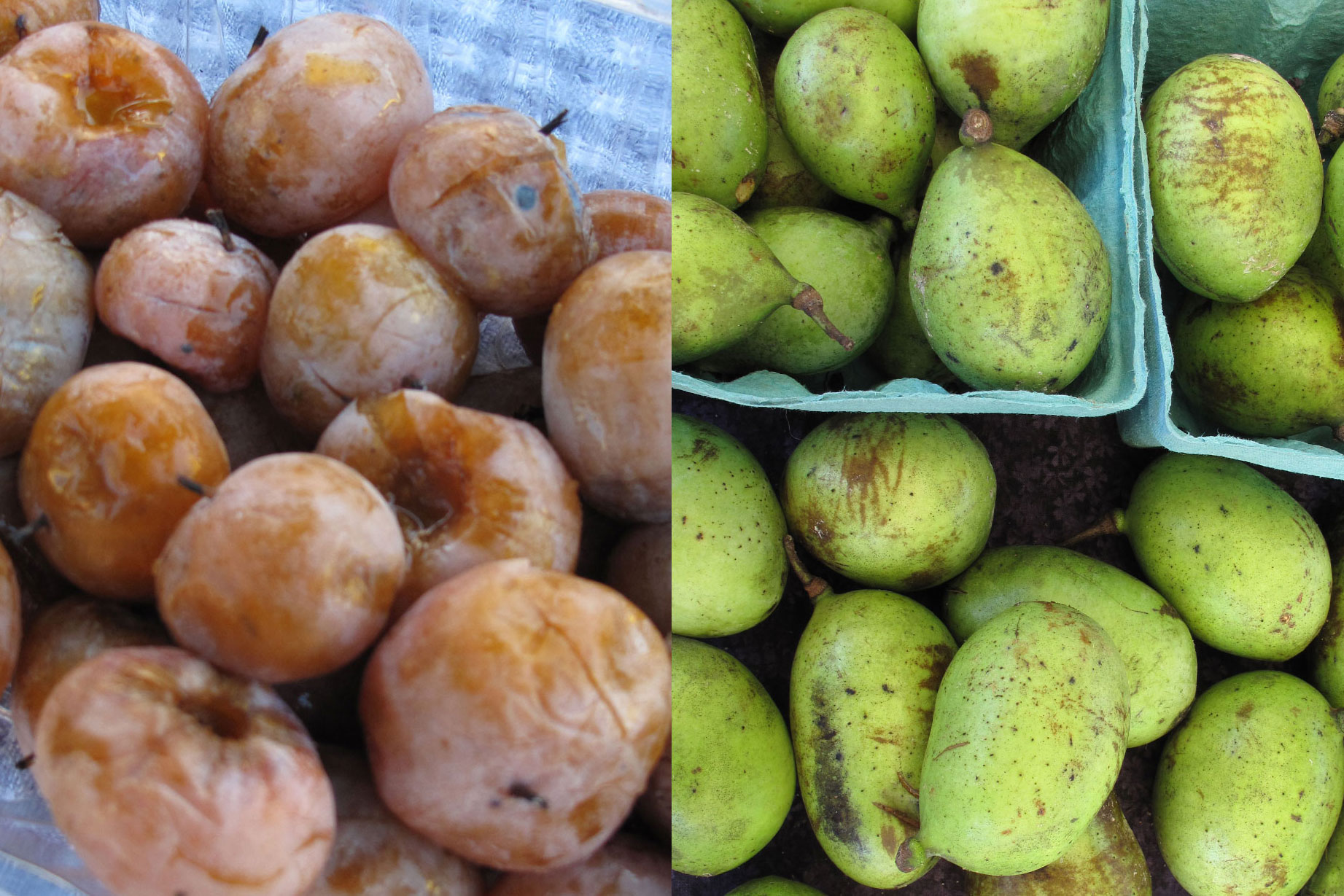 If you could imagine crossing a banana with a mango, then you'd get a Paw Paw. When you slice into the light green skin, there are a half-dozen big black seeds in the middle of the creamy, custard-like yellow meat. You can eat them out of hand or use them in the place of persimmon pulp or mashed banana in your cooking.

Collecting these wild fruits is not easy, however. According to Bobbi Boos of LIFE Certified Organic Farms, you can find good paw paws for only about three weeks in the fall.

She has been collecting them to sell at the local farmers market for ten years. To ensure that she's gathering only the ripest of paw paws, she shakes the tree in order to jar the ripe fruit off the branches. "And the animals love them," she adds. "So if they fall, they're somebody else's dinner."

Chef Daniel Orr remembers his gramma and grandpa singing "Way Down Yonder In The Paw Paw Patch" when he was a kid growing up in southern Indiana. "Back in that time," he says, "they didn't have all the candies we have now and they lived out in the country. So, when the paw paws ripened up, they would eat these until they got sick!"

This dish won't make you sick with too much paw paws; it's just a great way to celebrate a native fruit. Don't worry about following a strict recipe for this dish, says Chef Orr:

More: Apples were really the center of this dish. Listen to ethnobotanist, author, and Father of the Local Food Movement Gary Paul Nabhan talk about his love of apples.

Food Of The Gods

From paw paws and apples, and now to another Indiana fruit - persimmons.

The ripe ones look like very small pumpkins. Unlike paw paws, you can collect persimmons well into November. That's because the trees ripen gradually so the fruit doesn't all fall at once. If you're lucky, you can collect fruit from one tree over six weeks.

Tracy Branam forages for foods all throughout the year and sells his finds at the local farmers market. One problem with persimmons, he says, is that they're so soft and mushy it's hard to transport them any significant distance. So, what you would typically see sold commercially is frozen or canned persimmon pulp.

"But they are trying to develop persimmons that will be ripe and sweet, with fewer seeds, and firm enough that you can actually transport the fruit," he adds. By hybridizing different varieties of persimmons, these fruits would be durable enough to survive in a grocery store for a few days.

More: Listen to Tracy Branam talk about foraging for walnuts and mushrooms.

While persimmon bread pudding is the traditional way to serve this Indiana fruit, our forager Branam prefers persimmon ice cream. His wife, he says, enjoys persimmon smoothies or persimmon pulp over yogurt. Tell us how you like to eat persimmons by leaving a comment at the end of this post.

More: Learn even more about "The Food of the Gods" and see a step-by-step photo slide show of the preparation process for this dish.