Why Going Organic Just Got Easier For Farmers 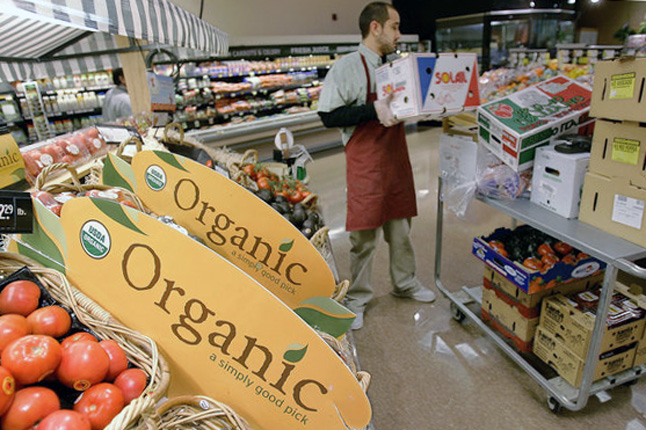 Let's say you're a farmer in the Midwest, growing conventional corn and soybeans. Times are tough right now. Prices are in the toilet.

If only you were selling organic soybeans and corn. They're worth almost twice as much, per bushel, as your conventional crops.

So why not grow organic crops instead? There's a catch. You'd have to follow the organic rules, renouncing synthetic pesticides and fertilizer, for three entire years before any of your crops could be sold as organic. For those three "transition" years, you'd have the worst of all worlds: Low organic yields and low conventional prices.

The Organic Trade Association, which represents America's biggest organic food companies, wants to make it easier for farmers to get over this hurdle. And its proposal has just been approved by the U.S. Department of Agriculture. It's a new certification for food grown during this transition period. This certification, the OTA hopes, will put money in farmers' pockets and encourage them to take the leap into organic certification.

"This is all about creating more organic farms here in America," says George Kalogridis, who works for the Clarkson Grain Company in Cerro Gordo, Ill. Clarkson Grain buys and sells both organic and non-GMO corn and soybeans.

"What's driven this is the organic animal-feed market," says Kalogridis. There's been a chronic shortage of organic grain in the United States in recent years, and without more organic grain to feed chickens and cows, it's hard to satisfy consumers' hunger for organic meat, milk and eggs.

Kalogridis says that many farmers are ready to go organic, and this new certification will make it feasible. "We've identified 150,000 to 250,000 acres that could be transitioned," he says, "and that could be ramped up rather quickly."

Clarkson Grain, he says, expects to offer farmers higher prices for transitional crops, about halfway between the prices of organic and conventional grain. The company will pass that increased price along to buyers, such as poultry farmers, who also are moving into organic production.

It's not clear, however, whether "transitional" food will fetch higher prices in a supermarket. One problem is the wording of a label for such food. The word "transitional" isn't exactly catchy marketing, and food companies may not be allowed to say much more than that.

"On-package labeling [of transitional food] is going to be a challenge for retailers, says Nate Lewis, OTA's director of farm policy. According to Nate Lewis, food companies can't imply that "transitional" food is organic. In fact, the label on this food can't even mention the word organic. "The O-word is clearly regulated by the National Organic Program," he says.

The value of this certification, Lewis say, may lie not in the supermarket but farther back the supply chain. Many egg producers or dairies also are interested in getting into organic production, and they're looking for new suppliers. They may pay extra for certified transitional grain, if it helps them lock in a reliable supply of organic animal feed for the future.