One Person's Trash Fish Is Another Town's Treasured Delicacy 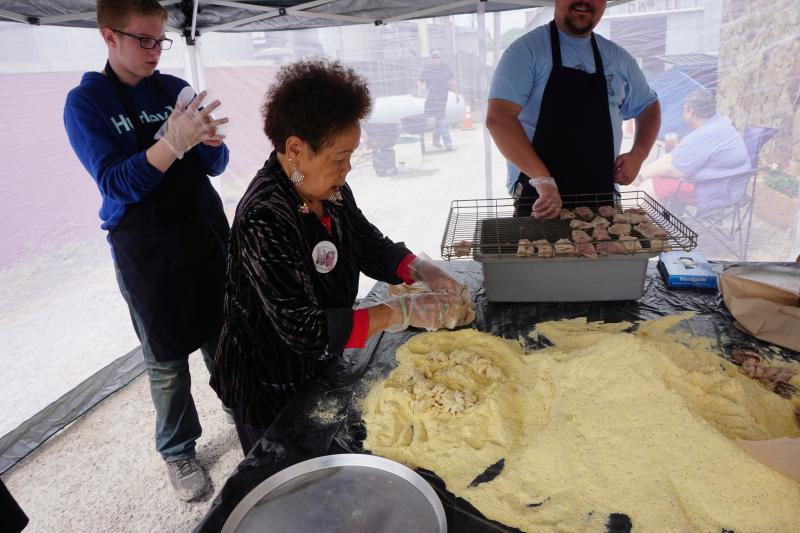 Summer festivals are ubiquitous (especially across the Midwest), and often highlight the local food specialty, be it corn, apples or beef. But when the food has a less-than-glamorous reputation, a town has a decision to make.

Decades ago, the small town of Nixa in Missouri’s Ozarks embraced what is often called a garbage fish. Catostomidae, better known as a sucker fish, is a bottom-feeder that’s plentiful in the cold waters of the Ozark Plateau. It’s also filleted, fried and at the center of Nixa Sucker Days.

The 62nd annual festival, which took place May 17-18, looks like any small-town fair: carnival rides for the kids, a dunk tank where you can try to douse the mayor, craft booths and local musicians. There was also the standard compliment of fair food: funnel cakes, corn dogs and onion rings.

But the star is the fried sucker fish.

Josh Piney has been frying sucker fish for more than 20 years.

“Most people think they are going to be nasty,” Piney said, sweat forming on his forehead from standing over two large black kettles with sucker fish fillets dancing in the rolling boil of oil. “But when they actually try them, 9 times out of 10 they like it.”

The sucker fish are coated in a secret recipe of cornmeal, salt, pepper and other spices before going into the oil. Piney said the other secret to making the fish taste just right is frying potato chips in every third batch.

“When you’re frying the fish and cornmeal and stuff is falling off, it settles in the bottom,” Piney said. “That will scorch your oil. When you run the potatoes through it, all that stuff sticks to the potatoes and actually filters the oil so you don’t get a burnt taste.”

Piney said it also makes the chips taste great, and is the perfect side dish.

The fish that would never make it on a fine dining menu is a hit in Nixa. John Wayne — his real name, and he does go by “Duke” — lives in nearby Springfield. He said he hates when sucker fish are called a trash fish.

“The texture is not quite as soft and flaky as like, your cod or your halibut. It has a little bit more texture, more of a chicken-like texture,” Wayne said, after waiting more than a half-hour in line for a plate of sucker fish and chips. “And the flavor is just a good fish flavor.”

The appeal of sucker fish to Nixians is as much nostalgia as it is flavor. Gayle Tallacksen said she loves the fish, but not necessarily the taste.

“Part of it is me remembering when I was a kid, going fishing with my dad and eating the fish,” Tallacksen said. “I like the community feel of the day. I can just set out here in my lawn chair and just watch the crowds.”

Bill Batson moved away from Nixa 30 years ago, and fondly remembers eating sucker fish as a kid. This year, he came back to Nixa and had his first bite of sucker fish in three decades.

“Delicious,” Batson said. “Exactly how I remember it.”

While lifelong Nixa residents like Tallacksen keep coming back to feast every year, the fish also attracts the curious first-timer. Brenda Butler lives in nearby Republic.

“Well, I have eaten a lot of different kinds of fish. I mean, I have my preferences, but I like all fish,” Butler said. And after her first bite, she declared gave it a good review: “Not disappointed. Very tasty.”

While the Sucker Days is still going strong, it has been forced to change with the times.

Rick Henry has been on the Sucker Days committee for more than 40 years. He remembers the 1950s and 1960s, when the Friday night event was a massive, community-wide, sit-down dinner.

“We served 4 or 5 thousand meals. I think last year we served 550,” he said. The number of the full meals of sucker fish, chips, beans and coleslaw went down steadily over the years.

Another big problem that caught up with the festival was the health department. Having volunteers catch, scale, gut and fillet hundreds of fish while complying with county regulations became expensive.

“We used top be able to make beans in a big old huge pot and stir them with a shovel in the open air. Can’t do that anymore,” said Chris Russell, director of the Nixa Chamber of Commerce, which runs the festival.

So, this year, the big meal was replaced by the fish and chips. And the line was at least 20 people deep from the first serving until they ran out of fish.

“There are a lot of apple fests and a lot of pumpkin fests and those kind of things”, Russell said. “We’re the only Nixa, and we’re the only sucker day in the entire world.”

Next year, they plan to add community fishing days to help introduce catching sucker fish to younger generations, and to make sure there is an ample supply to fry up for future Nixa Sucker Days.