Can Oats Improve Bottom Lines In The Corn Belt? 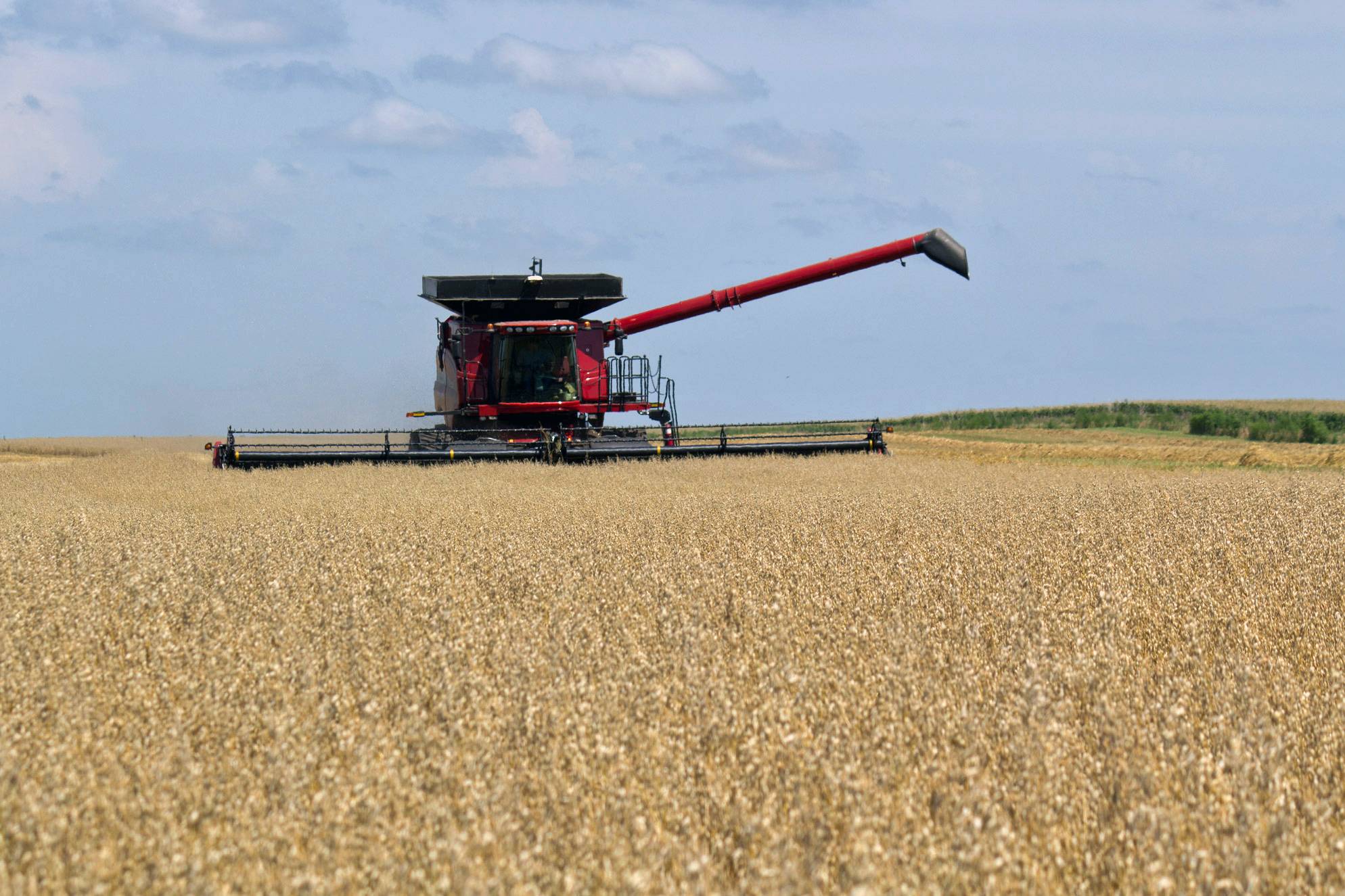 On a hot, July day in Boone County, Iowa, farmer Brett Heineman shuttled a semi from one of his family's fields to the local co-op. He and his uncle were harvesting the first crop of oats on this farm in decades.

Before corn and soybeans almost completely covered the landscape -- today, they account for 95 percent of crop acres in Iowa -- most Corn Belt farmers also grew oats or alfalfa. Now, the Heinemans are among the farmers taking a closer look at re-integrating the small grain into their operations.

Corn and soybean prices have fallen to frighteningly low levels in recent years and pressure has been mounting to curb the runoff of agricultural chemicals into streams and rivers. Oats, some Corn Belt farmers hope, might have a role to play on both the economic and environmental fronts.

Heineman, now 32, barely remembers the last time they grew oats, when he was a kid.

“I just remember putting the bales up,” he says. “And it was not a very fun job.”

As the combine passed through the field harvesting the grain, it was set to leave the remaining straw in neat rows that will be easily baled. But Heineman won't have to deal with the bales this time. They've hired someone for that job, and then the straw will go to a buyer who wants it for animal bedding.

“That was our biggest worry, if we were going to be able to get rid of the straw or not,” he said. “We were more than happy to get rid of it.”

Even with corn and soybean prices at low levels, farmers remain reluctant to give up potentially profitable acres. But they also recognize that a strict corn-soybean rotation is hard on the soil, and increasingly they're seeing weeds and pests that persist. A year of planting oats is risky because of the potential for lost income, but it offers others potential benefits, particularly when viewed across several years, not just one. For the math to work for the Heineman family, they knew they would need to sell both the grain and the straw. Still, oats may never be super profitable, as prices are typically low. They're more of an investment.

The field they planted with oats often floods, which cuts down on the yield of corn or soybeans. Since they harvested the oats well before the rush of the fall corn and soybean harvest, the family has time to make improvements to drainage on the field. They hope updating the tile lines, to drain off excess water, will translate to more profit from the money-making crops in the future. Simply leaving the field fallow so they could do maintenance on it would have been a clear money-loser. The oats were a middle ground.

We need to think of oats as a way to grow cheaper nitrogen.

“Having land open for some sort of maintenance in August is a really great idea,” said Sarah Carlson of Practical Farmers of Iowa, who runs a pilot project to see whether oats can regain a place in the Corn Belt grain rotation. “And so that maintenance might be physical, dozer-maintenance, but that maintenance might also be soil health improvements or breaking pest cycles.”

Oats already are a popular cover crop, something farmers put on their fields to keep them green in late fall and early spring. Cover crops prevent erosion and keep nitrogen in place. Typically, though, they are killed when it's time to plant the cash crop. Giving oats a full season's go offers farmers a product to sell, two if they can sell the grain and the straw like the Heinemans. And that early harvest means oat fields are available for more diverse cover crop mixes, which Carlson says will further enhance the soil for future crops and environmental benefits.

“In our oat pilot project, I have some farmers that are really excited about the soil health idea,” Carlson said, “and planting these crazy-sexy large cover-crop mixes.”

Those “sexy” mixes can include as many as 12 plant species, Carlson says, such as sunn hemp and clover, which are legumes that fix nitrogen in the soil, keeping it out of streams and available to the next year's corn.

Matt Liebman at Iowa State University has studied the impact of oats in the corn-soybean rotation. He says the sale price of oats can make them look unprofitable, but when they are “companion cropped” with these nitrogen-fixing plants--for example, a year of oats plus a red clover cover crop inserted between soybeans and corn--it's a lot cheaper to grow corn the following year.

“The production costs for corn within that whole rotation system can drop substantially,” Liebman says, “so that the overall economics of the rotation are favorable.”

In other words, a farmer can spend a lot less on fertilizer for corn in the year following the oats, which can make a big difference to the bottom line. And Liebman's research found the addition of the oats and clover in the system reduced erosion and nitrogen runoff compared to a traditional corn-soybean rotation.

Carlson is trying to shift the conversation so farmers focus on this investment side of oat-growing, rather than being preoccupied by the low profit-potential of oats.

“We need to think of oats as a way to grow cheaper nitrogen,” she said. And then, secondarily, oats might bring in some cash, as cover-crop seed or livestock feed.

Midwest farmers won't be growing your breakfast oatmeal any time soon, but Carlson hopes eventually that market will open up to them. She's exploring ways to make that happen, and the early adopters who are already growing oats could help make that possible.

This summer the Heinemans planted just one field in oats. Paul Heineman, Brett's uncle, says they tapped expertise from Iowa State University in selecting the variety and then dug deep into their memories from oat harvests of yore when they walked the fields taking hand samples to decide if it was harvest time.

“Hand samples is a good estimate of what they are,” he said. “'Til you run the machine through. And then you really know.”

As he drove the big combine through the field and watched the bin fill with oats behind him, he liked what he saw. This winter, he'll sit down with his family and crunch numbers on all the farm's crops. But they may need the data from next year's corn to truly calculate the value of growing oats.

Paul Heineman says if the numbers make sense, they might move oats through their fields, giving a different chunk of acres a break from corn and soybeans each year, to replenish the soil, reduce pest and weed risk and give themselves the chance to make field improvements.

That's the kind of landscape-scale change Sarah Carlson is hoping for. Her project included six farmers this season and she has funding to expand to 10-12 farmers next year.  But it's not just farmers and environmentalists waiting on the results. Carlson's project partners with several large food and beverage companies, including General Mills, that hope the study can point to ways to make the food system more sustainable.