By Patricia Letayf and Jessie Wallner 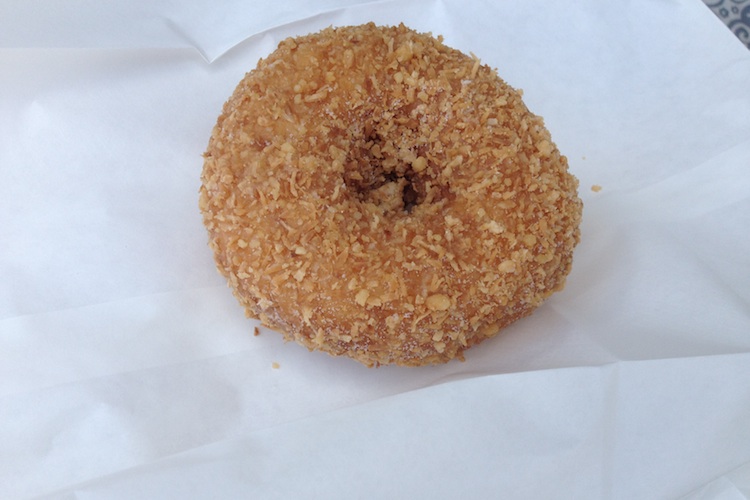 Today we were on a quest to free ourselves from the mid-day work slump but had no desire satisfy our fried food cravings with snacks from the ubiquitous Dunkin' Donuts chain.

Instead, we ventured to Donuts With A Difference, which was voted Boston's Best Local Donut Shop by Boston.com in 2010 and 2011. Located in Historic Medford Square, this charming hole-in-the-wall, hallway-sized eatery is reminiscent of a 1970s diner. It really couldn't be any more Massachusetts, right down to the elderly man with the Red Sox t-shirt and hat.

So what's the difference? The donuts are homemade on sight, and if you get there early enough, you can watch them get filled by hand.

We decided to ditch the conventional glazed/jelly flavors, though, and chose a Buttercrunch and a Gracie Stick. The Gracie stick -- a New England hit named after a friend of the owner -- is a twist on the cider donut. Long and dense, this sugar-glazed cinnamon raisin treat makes for a perfect afternoon pick-me-up when paired with coffee.

The Buttercrunch was topped with delicious bits of crunchy sweetness and had a chewy center but wasn't cloying -- a pleasant break from the commonplace flavors found at Dunkin' Donuts.

Nearing its thirtieth anniversary, this Boston favorite is a real gem for breakfast-food lovers and supporters of local eateries. Drop in if you're nearby.