Northeast Farmers Grapple With Worst Drought In A Decade 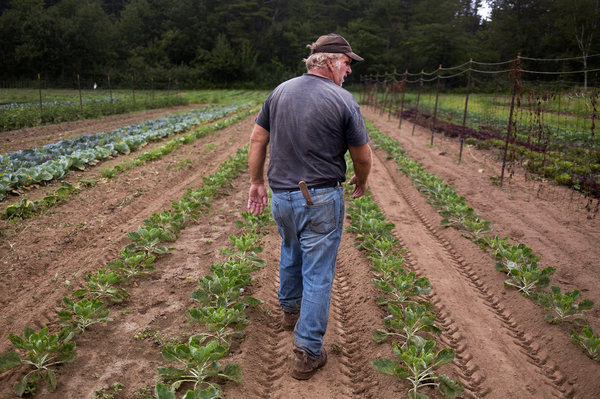 When people hear the word drought, they likely think of California. But there's also an extreme drought in parts of New England. The Northeast is experiencing the worst drought in more than a decade.

The Northeast has more than 175,000 farms that produce more than $21 billion a year in food, hay and flowers, according to the U.S. Department of Agriculture. But this year, many fields are bone dry - and that has many farmers thinking about how to manage their land, their animals and the water that is there.

If you're a farmer with an irrigation system, your crops could be just fine - or not.

"We couldn't work the land - we were so busy trying to put out irrigation pipe," says farmer Mike Wissemann of Sunderland, Mass. His motto: Irrigation is irritation. Pumps break. Hoses kink.

Warner Farm, which Wissemann runs with his family, is right on the Connecticut River. But he says that river water can't be his primary irrigation source. To feed one thirsty field, another field has to go without.

"We depend on getting second crops in," he says, "and we were unable to do probably 2 or 3 acres of sweet corn we would've done, another planting of summer [zucchini]" â€“ usually an overabundant crop.

Warner Farm sits in a part of the Connecticut River valley where soil holds water pretty well, because it is rich with silty clay left over from glacial times. Still, Wissemann thinks his 10th-generation farm lost tens of thousands of dollars this year.

Help, or at least advice, is on the way, from soil and crop researchers like Masoud Hashemi at the University of Massachusetts, Amherst.

"We've got a lot of farmers calling us, asking for some information about transitioning to no-till," Hashemi says. No-till is a practice of leaving fields unplowed and planting crops on top of leftover vegetative matter from preceding crops.

It's a practice many researchers are preaching nationwide. It prevents erosion and can make soil take on the qualities of a sponge. Hashemi will tell you, it's a sustainable farming practice - in short, grow food for people and don't cause environmental harm.

"How we manage the soil is the key to the sustainability of farming, and it remains for generations to come," Hashemi says.

Soil is also on the mind of cattle farmer Bill Fosher, who grazes his animals at Edgefield Farm in southern New Hampshire. Fosher has lived through protracted dry spells, interrupted by heavy downpours. That's "climate change" in the Northeast, he says.

Fosher knows farmers who wonder if this year's drought will put them out of business. The fields don't have enough forage with the lack of rain, and that's causing farmers to dip into their feed reserves.

"People are having to feed the hay that they were expecting to use this winter right now, in order to get through the drought," Fosher says.

Without rain, hayfields that usually yield two or three cuttings - this year they're yielding just one. Fosher says farmers may have to buy hay from other parts of the country - if it's available. And it won't be cheap to truck up.

Fosher is among those pushing farmers to manage their land more proactively. For instance, don't let animals graze fields down to the ground. He says farmers need to rotate their animals between fields after a few days, and make sure to leave some growth on the land. Bare dirt isn't good to see, Fosher says - it doesn't hold water if rains do come.

These annual weather patterns aren't going to change anytime soon. Mark Svoboda, a climatologist at the National Drought Mitigation Center, says many farmers are already adapting to a new climate, but, he says, it's on an as-needed basis.

"You've got this apathy when times are good, and then you panic when you're in the middle of a drought," Svoboda says.

The satellite-activated U.S. Drought Monitor, which Svoboda and others oversee from the University of Nebraska, Lincoln, is the go-to online map for Northeast farmers, tourism officials and governors alike. The satellites can detect when a drought is on its way. Cropland and pastures have their own drought signatures, Svoboda says. "And these satellites can see that even before the human eye can see it."

Advance warning is good. So is thinking ahead. Farmers can't just wait for the rain anymore, Fosher says. They need a plan. Is three months of reserve hay enough? Are farmers prepared to move their animals to find grass? It's not going to be easy.

"Drought is a very demoralizing affliction for a farmer to face because - with drought - even if you did do everything just right, it still wouldn't matter," Fosher says.

Large-scale irrigation in the East is not an option, as it is in the West. And all the processes farmers need to produce food start with water.

This story aired on NPR's Here & Now. It comes from the New England News Collaborative: eight public media companies coming together to tell the story of a changing region, with support from the Corporation for Public Broadcasting.