No, You Don't Need To Disinfect Your Groceries. But Here's How To Shop Safely 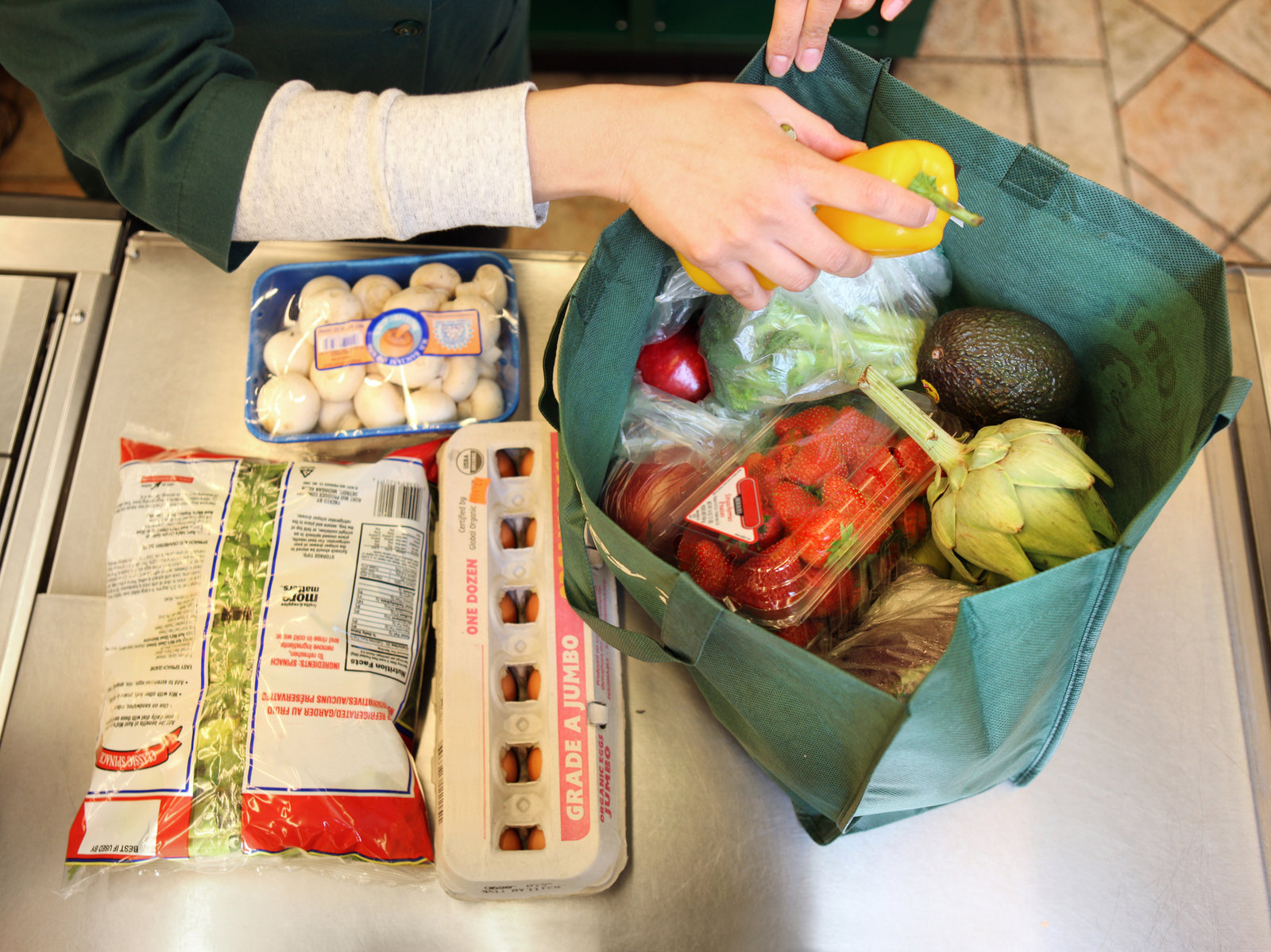 Going to the grocery store? Scientists share their advice about what to worry about and what not to. (Katrina Wittkamp/Getty Images)

The vast majority of the country is under lockdown right now. But stay-at-home orders come with a few exceptions - like grocery shopping.

Many of us are still venturing out to stock up on food and toiletries. But what's the safest way to shop during this pandemic? And what should you do once you've brought your haul home?

We asked infectious disease, virology and food safety experts to share their tips about safe grocery shopping - and what you can stop worrying about.

Know the dangers - focus on the people, not the food

Many people worry about the possibility of picking upthe coronavirusfrom things like grocery store conveyor belts or cereal boxes. But every expert NPR spoke with agrees that the biggest risk when it comes to groceries is being inside the store itself with other people who may be infected.

"While it is possible to contract the virus [from contaminated surfaces], the majority of transmission is probably going to be from respiratory droplets, which you're exposed to when you're around other people," says Angela Rasmussen, a virologist at the Center for Infection and Immunity at Columbia University's Mailman School of Public Health.

Donald Schaffner, a food microbiologist and distinguished professor at Rutgers University, advises that you look for a grocery store that limits the number of shoppers who are allowed to go in at one time. While that might lead to a long line outside, it's also likely to make it easier to practice social distancing inside the store - staying at least 6 feet away from other people. And once you are in there, he says, focus on getting in and out as fast as possible to minimize your risk.

"Be as efficient as possible in the store," Schaffner says. "Have a list. Move through the store quickly and efficiently. Get out of the way. Be respectful of other people. Maintain social distance while you're in the store."

Given the growing evidence that people can shed the virus before they are showing symptoms, they might not know they're infected either. That's why the Centers for Disease Control and Prevention now recommends that people wear cloth face coverings out in public, and some stores now require shoppers to wear them - not so much to protect you as to protect other people from you in case you are infected.

Dr. David Aronoff, director of the Division of Infectious Diseases at Vanderbilt University Medical Center, says to go to the store alone if you can, because bringing the whole family shopping is just going to add to crowding in the aisles - and could potentially raise your household's risk of infection too.

"If you have three people living together and all three people go to the store, even if all three people have a low risk of getting infected at an individual level, as a group they've tripled their risk, essentially," says Aronoff, who recently wrote about safe food practices during this pandemic in the medical journal JAMA.

Once you are in the store, make sure to sanitize the handles of your cart or basket. Many stores do this for customers now, but it doesn't hurt to bring your own hand sanitizer or disinfecting wipes if you have them. Be sure to avoid touching your face while you are there, until you can sanitize your hands again.

One other tip, from Rasmussen: Don't use your cellphone while you're in the store, because a "phone is a great way to get your hands right up next to your face."

"Gloves are not magic," Schaffner says. "Gloves don't make you invulnerable. As soon as you touch something with your gloved hand, that contamination is on the gloves."

Rasmussen agrees. "I've seen a lot of people wearing gloves out in public, and they just kind of wear them all day and do a lot of normal activities, like talk on their phone, potentially eat, potentially handle food that they're going to eat later with those gloves on," she says. "And that's not great practice."

She leaves the gloves at home and sanitizes or washes her hands instead - before entering the store, after leaving and again once she gets home.

Rachel Graham, a virologist who studies coronaviruses at the University of North Carolina's Gillings School of Global Public Health, also skips the gloves. But if you do choose to wear them, she says be sure to remove them properly: "The best way to remove gloves that might be contaminated is to basically grab them from the inside on your palm side and pull them out like you're pulling off a sock, so you end up turning them inside out."

Give the cashier some space

While grocery shopping may stress you out, it's the workers at the grocery store who are more at risk, because they interact with many customers daily. Protect them by making sure you stand 6 feet away, or as far as you can, while checking out.

As for whether to use self-checkout or a cashier, look for the option that allows you the most room to maintain social distance. It all depends on how the store is set up. Some checkout counters now have plexiglass between the cashier and the paying customer. In that situation, says Aronoff, going to a cashier is fine, especially if one or both of you is wearing a mask or face covering.

Choose no-touch payment when you can

If you've got a no-touch option like Apple Pay or Google Pay, use it. If that's not an option, a credit card machine with a chip reader can be no-touch, notes Graham. She's personally avoiding cash at the moment, because earlier research has found that cash currency can harbor lots of microorganisms.

However, Rasmussen notes that we don't know how long this coronavirus survives on cash. And she says that if your credit card transaction requires you to touch a keypad, that's a "high-touch surface" that could potentially harbor other pathogens, if not the coronavirus. That said, "I don't want to encourage people to be extreme germophobes," Rasmussen says.

Cash or credit, she says, just make sure to sanitize your hands (and your credit card) after the transaction.

Many shoppers are now following elaborate routines to disinfect their groceries, thanks to a viral video put out by a Michigan family doctor. But all of the experts we spoke with say that disinfecting and hand-washing every last item in your grocery haul is really not necessary. You might find it comforting to know that none of these experts are doing this themselves.

Rasmussen explains that the probability of getting infected from a contaminated surface is not zero, but it is fairly low. That's because respiratory droplets would have to have landed on the exact spot on, say, a box of cereal that you are touching. And even then, you'd have to get enough residual virus on your hand to start an infection - and you'd have to transfer that virus to your face. Bottom line: If you follow good hand-hygiene practices - washing your hands after unpacking your groceries, before cooking and before eating - then, she says, your risk is probably "very, very low."

As Aronoff notes, "Time is really on your side here." That's because as soon as the virus lands on a surface, it starts to lose infectiousness. "After 24 hours, the vast majority of virus is no longer infectious," he says. And after 72 hours, he notes that research has found the virus is trace orundetectable on most surfaces.So if you know that you're not going to use a can of soup for two or three days, he says, just put it away, wash your hands and go about your day. And one more thing: Make sure to wipe down your countertops after you unpack, using a household disinfectant registered with the Environmental Protection Agency.

If you're still worried and it's a food that doesn't need to be refrigerated, Graham says just leave it out for 24 hours.

If you really want to wash your groceries, don't use disinfecting spray or wipes

If it somehow lessens your anxiety to wipe down every last jar of jelly, there's no harm in that, experts agree. But Graham warns that if you feel compelled to wipe, it might be wise to stick to soap and water. "A lot of the packaging that groceries come in is really not meant to be sprayed with disinfectant, and you [could] actually end up contaminating your food," she says.

Schaffner adds that disinfecting sprays and wipes are meant to be used on hard surfaces, which would not include many of the kinds of plastics or cardboard used for food packaging.

Rinse fresh produce in plain water - and eat your veggies!

Some people are advocating washing produce in soap and water. But Schaffner says that's a bad idea because it's possible that if you ingest soap residue, it could lead to diarrhea or vomiting. He says the best thing is just to rinse your produce in cold water. If it's an item with a tough skin, you can use a vegetable brush.

And Schaffner says, please don't reduce your consumption of fresh fruit or vegetables. "There's just no evidence that these foods can transmit the virus or can cause COVID-19," he says. Plus, he says, produce offers valuable nutrients that are especially important in these stressful times.

Should you shower or change clothes after shopping? It depends

"I personally don't like to do a full de-con [de-contamination] when I get home from the store," Rasmussen says. "I wash my hands. I'm not routinely putting my face and mouth all over my clothing."

But, she adds, "people with small children might consider otherwise, since kids - especially little kids - are maybe not so concerned about where they put their mouths or their hands." She says it comes back to personal comfort. "If you feel more comfortable changing clothes and taking a shower after you come back from an essential errand, then by all means do so," she says.

Graham adds that if you live with someone who is at high risk for severe disease with COVID-19, showering and changing might be a reasonable precaution to take.

One simple way to stop worrying about grocery shopping and to practice social distancing is online delivery.You can pay ahead of time online and have the groceries delivered outside your door with no face-to-face contact. Just remember, while you're staying home safe, workers are putting themselves at risk to collect and deliver your food. So be sure to tip generously. As for what to do with unpacking those groceries, experts say the advice is the same as if you'd gone to the store yourself.

A word about frozen food

Some of you have asked if freezing food kills the virus. The answer is no. Refrigerating or freezing would actually help the virus survive longer - that's why research labs freeze virus samples to preserve them, as Graham notes. But if you're worried about handling a frozen dinner, just throw away the packaging and remember to wash your hands after you've removed the food, Rasmussen says.

This story was originally posted on April 12, 2020, on NPR Life Kits