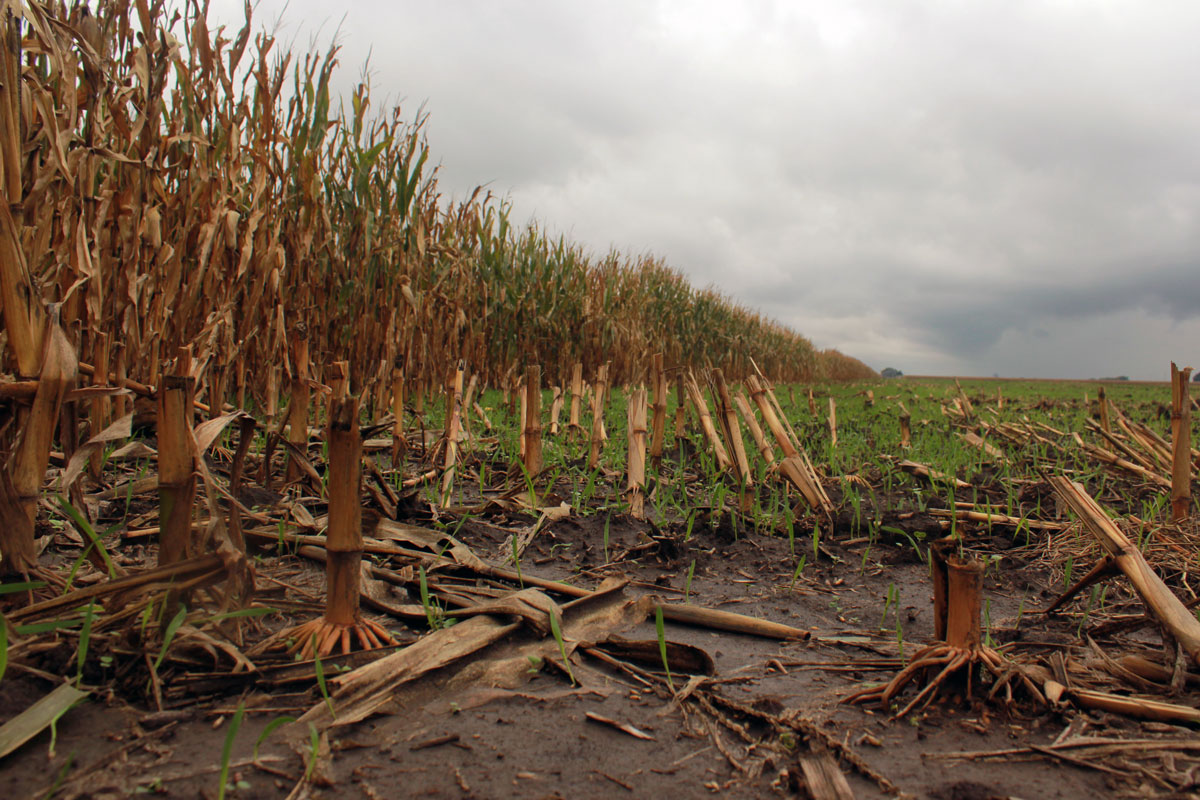 Earlier this year, Des Moines, Iowa, made news when the city announced it would sue farmers in a legal battle over fertilizer. The city's water supply from the Des Moines and Raccoon Rivers often surpasses the legal limit for nitrates (10 mg/L), which commonly appear in water contaminated by runoff from farm fields.

Too many nitrates are a health hazard, particularly for infants whose blood can lose its ability to absorb oxygen. So nitrates must be reduced or removed, but cleaning nitrates from the city's water is a huge expense. When nitrate levels rise above the safe drinking water limit, Des Moines fires up a filtering system that costs thousands of dollars to operate each day.

Des Moines is unusual, though. In most cases, nitrate pollution is not a big city problem. It's most often a small town problem, says Bruce Dvorak, a professor of environmental engineering at the University of Nebraska Lincoln.

“Nitrates in drinking water is the most common source water problem in the region,” Dvorak said. “And for many small towns this is a very major cost issue. It may mean water rates, if they're lucky, only double. And some cases it may go up by eight to ten times.”

That's the case in Creighton, a small town in northeast Nebraska. Creighton installed a $1.3 million water filtering system in 1993 to reduce nitrate levels in town's drinking water. It has been running ever since, pulling nitrates out of about 300,000 gallons of water per day.

“Our nitrates coming in is 17 parts per million. Ten is the legal limit,” said Kevin Sonnichsen, Creighton's water operator. “After treatment we're putting it out and distributing to the public at just about four or five parts per million.”

Nitrate can come from your lawn or even the atmosphere. But Creighton is a rural town surrounded by farms. Farmers often put on more fertilizer than their crops can use. Then, rain or irrigation water can carry the nitrates down into the groundwater supply.

Creighton's problem is getting worse, not better. Sonnichsen says a plume of groundwater with even higher nitrate levels is moving toward the town's wells, and more filters may be needed.

Most small towns don't have the finances to run the legal challenges. As well as politically, I'm not sure it really would be sustainable in many small towns here in Nebraska. Clearly the farmers are the lifeblood of these communities.

Hundreds of small towns in the Midwest have nitrate levels near or over federal limits for nitrate. From Burlington, Colorado; to Churdan, Iowa; to Pretty Prairie, Kansas; and Edgar, Nebraska, small towns often struggle with the bill for clean water.

In Nebraska, 161 communities conducted additional tests on their water in 2014 because nitrate levels are near the limit, according to state numbers collected by Bruce Dvorak at UNL. That's down from a peak of 343 towns required to do more frequent testing in 2010. But it doesn't mean the nitrates are gone. Dvorak says many towns have found ways to work around high nitrates by shutting down contaminated wells or drilling new ones. They found a safer water supply.

Workaround measures like that are expensive and are often not a permanent fix. Drilling a new well may cost $300,000. Shutting down a contaminated well can run $25,000-$30,000 according to Dvorak.

Funding for such projects often comes from a low-cost loan fund the state of Nebraska set aside for water systems. From 2002-2012, Dvorak said 75 percent of the money lent from that fund was spent on nitrate-related projects.

As expensive and difficult as nitrate issues can be for many communities, Dvorak says it would be hard to find one willing to take the issue to court as Des Moines has.

“Most small towns don't have the finances to run the legal challenges. As well as politically, I'm not sure it really would be sustainable in many small towns here in Nebraska,” Dvorak said. “Clearly the farmers are the lifeblood of these communities.”

Towns like Creighton need farmers to produce, and for that farmers will use fertilizers.

Rye To The Rescue

But there are different ways to do it. Jim Fuchtman lives and farms just outside of town. On a clear fall day, he walked with me into a field scattered with slender, green blades of grass.

“This is a field where I had soybeans and then we planted a cover crop of rye,” Fuchtman said.

The rye grass will hold nitrates near the surface, away from the groundwater. This is Fuchtman's first run with cover crops. He planted them as part of a voluntary project in the Bazile Creek watershed, which includes Creighton. The project encourages practices that reduce nitrate levels.

“Soil health is my main objective,” Fuchtman said. “With soil health your nitrates don't leach as fast, you're getting better utilization of your chemicals.”

Stephanie Butler of the Upper Elkhorn Natural Resources District oversees the Bazile Creek program. She says it's a step forward, but it could take years to pay off.

“We definitely have long term goals – 20, 30, 40 years down the road,” Butler said. “I mean it took a long time to get to this level so it's going to take just as long to see some decline.”

That means Creighton's water treatment plant will probably still be running for decades to come. Water operator Kevin Sonnichsen can't imagine the town suing local farmers like Des Moines. But, he says, many farmers will find their own motivation. He's tested water for rural residents, and some samples are four to five times the legal limit for nitrates.

“I mean it's not just for the good of our city but for them, too, and their kids,” Sonnichsen said.