Have Tools, Will Cook 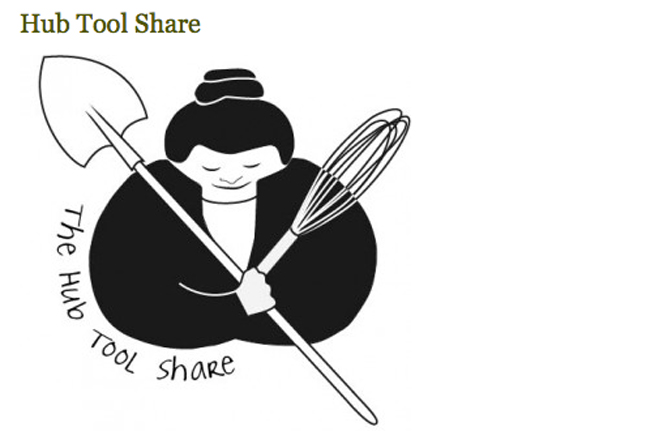 Mother Hubbard's Cupboard goes by a few nicknames in the Bloomington community… MHC, Mother Hubbard's. But the nickname they like the best is The Hub. That's because they want to be more than just an emergency food pantry. They want to be the community resource center for all things food.

On this warm June morning, a line has formed outside the pantry twenty minutes before doors open for afternoon shopping. This will probably be the only time there will be a back-up at the pantry.

They moved into their new building one year ago which has given them so much more space to work with. The building boasts a kitchen and on-site gardens where they conduct classes on everything from pizza making and preserving, to worm composting and container gardening.

One thing administrators wanted to incorporate into the new Hub was a tool share program, which is a lending library of cooking equipment and garden tools. Participation in the program is free to folks who shop at the pantry; other community members can pay a small annual fee to borrow equipment.

"We offer these great cooking at gardening classes, but often one of the central barriers for people actually going home and cooking from scratch, preserving food, canning, breaking ground on a home garden is having the tools they actually need to get started," says Stephanie Solomon, director of education and outreach at Mother Hubbard's Cupboard.

We have always operated on an honor system, so it's kind of part of the culture of Mother Hubbard's Cupboard. I feel like many of the people who use our services kind of already have that understanding.

They looked online to see how other organizations run programs like this. While there are plenty of examples across the country, Young says they didn't find any that were stationed in a food pantry, focused on serving low-income households.

Tools Of The Trade

Kayte Young is the nutrition education coordinator at Mother Hubbard's Cupboard. She tries to keep her cooking classes pretty basic, "But it is true that there are a few kitchen tasks, especially the larger scale like canning and dehydrating that do require special tools, or they certainly make the job easier."

The dehydrator in particular has been really popular so far.

"We've demonstrated it a few times. We've done banana chips in there, we've done apples," says Young. "People have sampled them and then they've been like, ‘I want to borrow this!'"

One tool that looks more like a medieval torture device than a kitchen tool is the apple peeler and corer -- called the Apple Master.

"We've done several demonstrations of this in the food pantry and people get really excited about it," she says.

As you crank an apple through the tool, it is peeled, cored and sliced. Young says kids get really excited about the curlicue peel, "And they'll play with it and start eating it!"

Young and Solomon talk a lot about breaking down barriers in their work at the Hub.

Simply getting people to come to the Hub to shop is perhaps the most important barrier of them all to break down. They do that by not requiring folks to prove their need to shop in the food pantry.

"We have always operated on an honor system, so it's kind of part of the culture of Mother Hubbard's Cupboard," says Young. "I feel like many of the people who use our services kind of already have that understanding."

Perhaps that's why every tool has been returned to the Hub is the same condition in which it was lent.