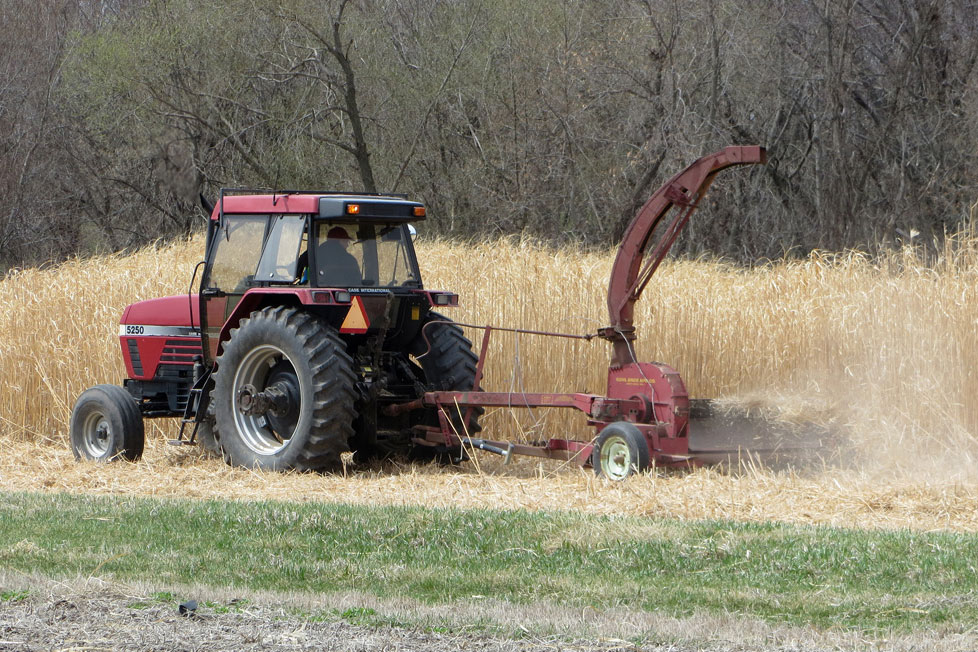 Miscanthus, a relative of sugar cane that looks like bamboo, could be the Midwest's next energy crop. But in a region dominated by corn and soybeans, it has yet to fully catch on.

The tall, stalky grass is native to Southeast Asia. It would remind Vietnam veterans of something they called "elephant grass" and often destroyed with Agent Orange. And miscanthus is the king of biomass fiber – one acre can yield 15 tons. Plant this perennial once and it keeps on giving for up to 20 years, with limited chemicals necessary.

At this point, though, Iowa's total crop is a mere 50 acres or so, and farmers in Illinois, Missouri, Kansas and other states have planted small amounts. But miscanthus is a viable fuel; it's fairly common in Europe.

"Miscanthus is such a new crop that we are the first 16 acres to be planted in Iowa," said Steve Schomberg, who has Iowa's largest miscanthus farm, in Muscatine County. "It gets gawkers, yes. People stop along the road and talk about it, (and ask) ‘What are you growing there?'"

Schomberg's crop will be mixed with coal and turned into steam and electricity at the University of Iowa power plant. The key challenge, according to the campus utility's principal engineer, Ferman Milster, is the absence of a biomass market.

"It's not like a commodities market like coal or natural gas or oil," Milster said. "But I think, given time and continued movement toward a more sustainable energy source, we will see biomass develop and continue to look more like a commodity."

As a component in the school's renewable energy plan, the University of Iowa recently planted 13 more acres of miscanthus and is recruiting Iowa farmers with the goal of having 2,500 acres in production by the end of 2016.

In Illinois, grain farmer Eric Rund is promoting miscanthus as a heating fuel on the farm, instead of using the more expensive liquid propane. He says farmers in Austria and Germany grow miscanthus and burn it on their farms to heat their homes and livestock buildings. And Rund isn't the only one, according to Travis Hedrick at bioenergy company Repreve Renewables.

"This year in our 2014 trailblazer program, we've propagated over 1,000 acres in North Carolina, Mississippi, Iowa and Wisconsin," Hedrick said.

I imagine that in ten years it's not unreasonable to think that we would have (miscanthus) on thousands of acres in the state, at least, and millions in the future.

Crop Of The Future?

"When I look at a crop like this, I see a chance to make fossil fuels cleaner," Heaton said. "Because what we're talking about is blending this clean grassy biomass with coal, so it just cleans up coal a little bit."

Still, it's just the beginning of a potential miscanthus industry. And like any industry, getting off the ground takes a lot of effort.

"I always joke that I'm a soybean agronomist in the 1930s," Heaton said.

At one time, soybeans were a novel crop that seemingly appeared from nowhere. Now, they're a staple of Midwest farms.

"How many acres of soybeans in Iowa did we have in the 1930s? Tens to hundreds, right?" Heaton asks. "I imagine that in ten years it's not unreasonable to think that we would have this on thousands of acres in the state, at least, and millions in the future."

An ornamental variety of miscanthus plant is common in landscaped gardens. And soon, it might be common to see a lot more of it in farmers' fields.