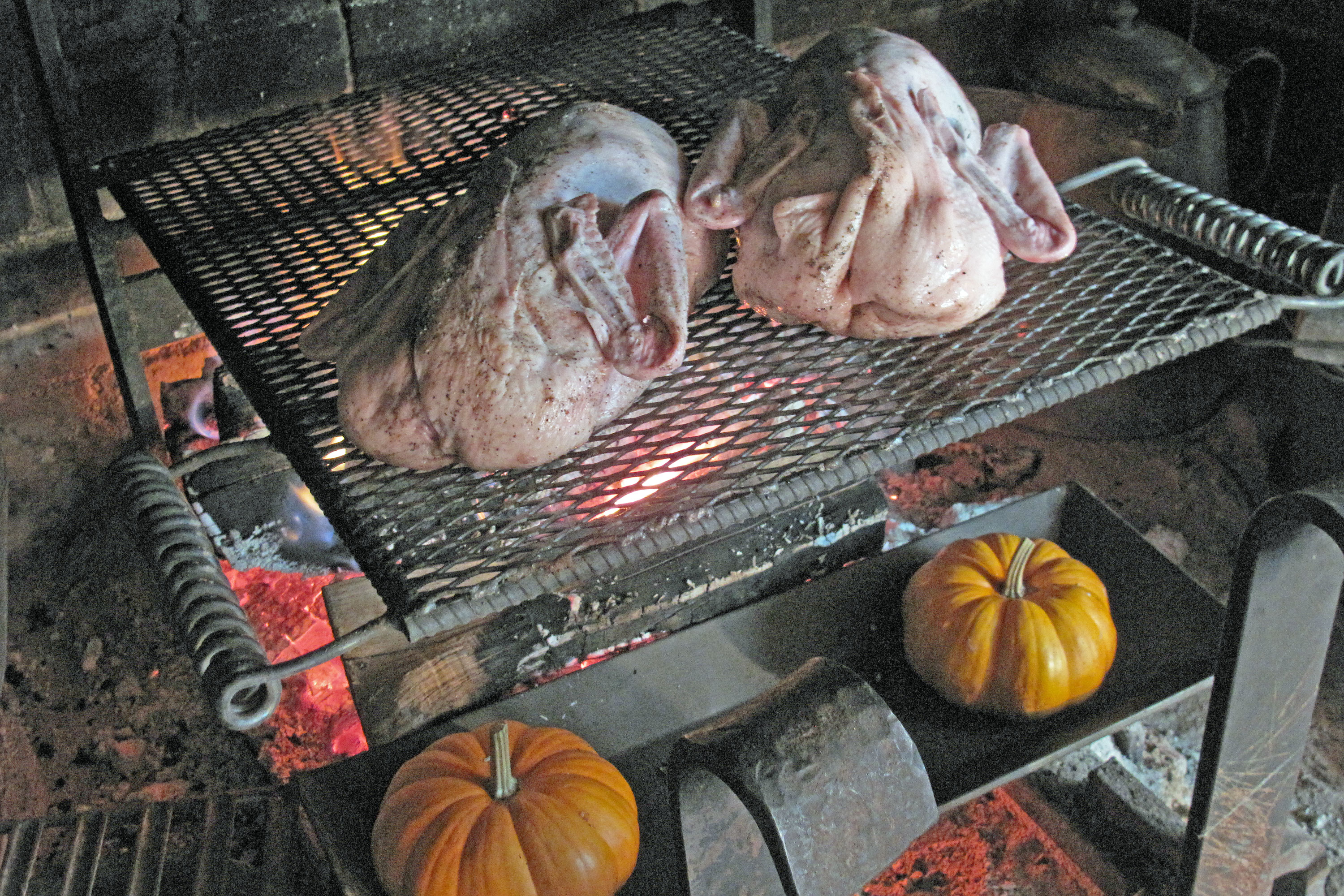 Home For The Holidays

The hostess for our holiday feast is Gretchen Marks. She's opened up her home to us located in the outskirts of Columbus, Indiana. I'm excited to prepare most of our meal in her fireplace, especially the two local ducks I purchased from Maple Leaf Farms.

If you want, you can cook duck so it's medium rare and pink on the inside, but we're going to cook more of a traditional roast duck where the skin will be crispy and crunchy.

Start With The Seasoning

First, we season the outsides of our two 3 1/2 pound ducks with salt and freshly ground pepper.

Inside the cavity, I throw in half a lemon. The juice provides acid and the zest has a wonderful fragrance of citrus that will perfume the ducks.

Then of course we're going to add garlic, which is one of our favorite flavors. Cut the garlic clove east to west so you expose all of the openings of the garlic.

Finish seasoning the cavity with rosemary and thyme. The rosemary has that oily, piny aroma to it which goes well with the richness and fattiness of duck. These herbs are also herbs that last later into the fall and early winter outside. If you cover them up with some leaves from the garden, you can keep them going almost through the New Year.

Gretchen lit the fire in the fireplace around 7:00am. We are placing the seasoned ducks over the fire around 10:00am after it has burnt down a bit. You don't want to cook over a high flame, and you don't want the ducks to drip on the fire causing flare-ups.

Start with ducks breast-side down to get the skin nice and crispy.

Baste the birds occasionally over the next 2 1/2 hours. Be patient -- it's worth the wait!

Waste Not Want Not

We are cooking the entire bird today, including the organ meats. I'm starting them cooking in a pan on the stove top, seasoned with a pinch of my Sweet Seasons Spice Blend. These will be great with stuffing or we can mix them in with wild rice.

You can use the necks for stock, but there's still a good amount of meat on them, so we'll throw these on the grill with the ducks once they finish warming on the stove top.

"It's taking the whole animal and not wasting anything," says my mom, Mary Lu Orr. I'm saving the duck necks especially for her. She remembers back to her childhood when her mother and father used to serve her chicken feet:

During the end of the Depression, my mother and dad were selling chickens every Saturday. My mother would always clean the feet. They would cut off the toenails and the rest of that yellow covering would just come right off. They're just this pristine, white color, and they're full of collagen -- that's so good for you. They would cook those, particularly in soup, with these other parts. I remember one time, I wasn't very old, and we were having company for lunch. I was dishing up the soup and mother said, 'I believe we won't serve the feet this time to our company,' because I think she thought maybe they didn't feel the same way we did.

Company For The Ducks

I placed two small pumpkins in the drip pan. They were volunteers that grew out of my compost heap. The juices from the ducks will coat them as they cook. When they are soft enough, we will cut them in half, scoop out the seeds and season them with brown sugar, butter, lemon juice and salt and pepper. Delicious!

We've also got some figs that we were eating with the country ham. I will place them in the drip pan as well and maybe finish it off with a little bit of red wine and butter. Suddenly, we have a sweet sauce for the ducks!