'Kings' Of The Indianapolis Brew Scene 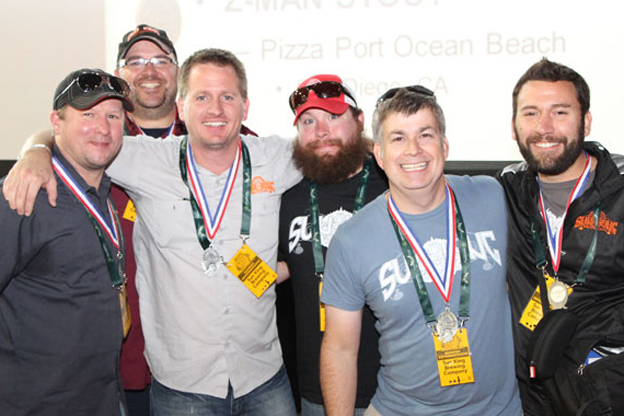 Formed in July 2009, Sun King Brewery has been rolling out local brews for thirsty Hoosiers in downtown Indianapolis.

Co-founders Dave Colt and Clay Robinson didn't just wake up one day and decide to brew beer. Both had a history of brewing, and worked together at a brew pup in Indianapolis.

A three-year conversation started between the two about what they would do if they could open their own brewery. Questions about best and worst jobs, types of beer to brew, and discussion about corporate culture were included. Out of the conversation, the brewery was born.

"Our vision when we finally actually got around to starting Sun King was really to make great, fresh, local beer for central Indiana. Our focus was no larger than it is right now, which is Indianapolis, Lafayette, Bloomington, Muncie," Robinson says.

"Beer is best fresh, and it's best closest to the source."

Colt agrees. "Grain to glass is really what we are trying to achieve. Making the experience transfer from the brewpub out to the general public at large."

Going For The Gold At The Great American Beer Festival

The Great American Beer Festival took place September 29 - October 1. Sun King received eight out of 10 medals awarded to breweries in the state of Indiana --up six medals for the brewery from 2010. Of those eight, four were gold.

So, how does it feel not only to carry the state, but receive so many honors?

"To win even a bronze, one medal, at the Great American Beer Festival, is just -- it's a fantastic honor. It's just a really overwhelming and positive feeling. It doesn't make us better brewers, it doesn't make us make better beer in any shape or form, but it is a nice recognition by a peer group that you're doing a pretty okay job," Colt says.

"Just one is fantastic, at three I could hardly feel my face," he laughs.

There were times where the awards were being called and the Sun King team was asked on stage. Before they could leave the stage, another award was announced.

"We're kind of that out of left field, 'who the heck is Sun King?' kind of thing, and all of a sudden we're up there in front of people getting a medal, and you're getting another medal," Robinson says.

The team joked about getting enough medals that each member present -- six of them -- could wear one.

After four medals, there was a lull in awarding. Then the accolades started up again, and the team had more medals than brewers present.

"If you could see pictures of our faces, just perma-grin from ear to ear," Robinson says.

Brewing Beers With A Local Focus

The specialty beers were based more on an "unspoken calender" -- "When it's 95 degrees out in July, you're not going to roll out a Russian Imperial Stout at 10 percent. It's just not going to go very well," Colt explains.

Some of the beers are focused on local ingredients, like the award-winning Popcorn Pilsner. The popcorn pilsner was born out of Colt's imagination. He took the idea of adding popcorn to beer to Robinson, who called him crazy.

"Then he explained how popping a popcorn works similar to the actual malting process, how the starches are set up for the conversion into sugar," Robinson describes.

"We actually got a silver with that one, which is really a proud medal because the lager category is often dominated by larger breweries who do a lot of lagers. Not only did we win in the lager category, but we won with a beer that was made with locally grown and sourced Indiana popcorn."

Local ingredients are central to Sun King beers. Sometimes the ingredient comes first, like popcorn, other times it's about figuring out how to take the beer in a different, local direction.

"We use popcorn, we use crab apples, we are making a malt liquor that is utilizing Indiana-produced masa," Colt says.

When wanting a local tie for the malt liquor, the first place people's minds go is corn, Colt explained. So he asked, can we do better than corn? The result is local masa, which the Indiana agriculture department helped the brewers find local for their malt liquor.

"Dave and I were both born and raised in and around Indiana -- he was born in South Bend, I am from the Indianapolis area, so we're both Hoosier boys, born and bred," Robinson says.

"Cans are better for beer, bottom line. The two largest deteriorants for beer are sunlight and oxygen. So no matter how dark a glass is, sunlight is still going to work its way through," Robinson explains. Beer is best on draft or from a keg, he says, and what is a can but a tiny keg?

The cans Sun King uses come from Ball in Monticello, Indiana, causing a smaller carbon footprint. They weigh considerably less than bottles, lightening up the shipping costs and loads.

"A can can actually make its way from a recycling bin back into a sheet of aluminum which will be extruded into another can inside of less than a month," Robinson says.

What About The Name 'Sun King?'

Colt introduced the name, giving the earth's proximity to the sun and the place of the sun in the solar system. "Sun King" also had historical references, from the Mayan calender to popular music.

"I hated it," Robinson says.

"He drug me over to the window, it's like a February day, so it's kind of gray but the sun's peeking through, he's like, â€˜What's that? That giant ball of gas in the sky?'" Robinson says.

"The sun shines everywhere. It is responsible for all that give life, and makes beer."