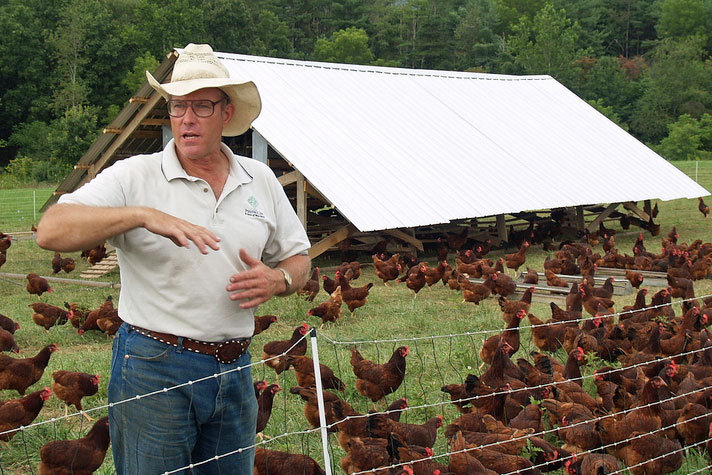 Earth Eats recently spoke with farmer Joel Salatin, whose Polyface Farm was featured in the films Food Inc. and Fresh. He is also a food activist and an author. His eighth book, "Folks, This Ain't Normal," was released on October 10, 2011.

Read part one and part two of the interview.

Engaging With The Enemy?

Annie Corrigan: I read about an event recently where Michael Pollan interviewed the Executive Vice President of Grocery Merchandise for Walmart. What I took from that article is that Pollan thinks we as foodies should engage with large corporations like Walmart and McDonald's to affect change in the food system directly. That's a new spin on what I normally hear, which is that we should deal with the corporate food system by simply taking our money elsewhere and just opting out altogether. Comment on both of those positions.

Joel Salatin: That's a great question. I'm a fairly libertarian kind of guy, so you want find me dumping manure on McDonald's parking lot. You will not find me picketing the World Trade Organization or Walmart.

In fact, this very summer we had the CEO of Sam's Club and ten of his executives here at the farm for a tour. We spent most of the day together and it was fascinating to meet them. We couldn't have been farther apart in terms of business models and planetary thinking.

AC: Before you get too far away from that, are you going to start partnering with Sam's Club do you think?

JS: *laughs* I don't think so. Here's the problem: In order for us to market to Sam's Club, it would so fundamentally change their marketing paradigm that they would not be Sam's Club anymore.

JS: As you know, Walmart tried organics and fell flat on their face. Customers revolted. They found that their customers didn't want organics. They posted huge losses until they backed away from organics.

The fact is that a certain business model attracts a certain mentality. When you have a business model predicated on cheaper and on volume and without regard to externalized costs, whether they're energy costs or military costs that are incurred to keep fuel (prices) low, that attracts a certain kind of patron. The question is can any of these Walmart-type business models actually change their model to attract people like us? And I would say that in order to do that, they would no longer be Walmart. They might change, but in doing so, they would lose the solid patron base that they currently have.

There's no substitute for a transparent, integrity-type, localized-type system. I do indeed encourage people to vote with their pocket book and opt out of those big operations.

Looking On The Bright Side

JS: Oh my, there is so much to be optimistic about! One is what I call the local food tsunami. Included in that, I'm seeing college students are cooking. They're being jazzed about recipes, about community-supported agriculture, about bringing potlucks into their global food issues classes. This is huge. When I was visiting Stanford, everywhere I turn, every little triangle in the sidewalk by a dorm was a raised vegetable garden.

The work that Will Allen is doing there in Milwaukee with Growing Power. The work that Paul Stamets is doing with Fungi Perfecti. The work that Elaine Ingham has done with the Soil Foodweb so we can see into this unseen world that we're all totally dependent on. It makes Steven Spielberg look like child's play. To be able to see it graphically and to be able to show people this is what's going on under your feet, this is what makes you live. This is great because we have not been able to really penetrate the psyche of the average person.

Permaculture has now passed the 1 million mark of people who have taken the two-week designers course. That's huge. I'm seeing a real resurgence.

It is truly the physics of "For every action there is an equal and opposite reaction." As the globalists take more power and more people go to Walmart, the equal and opposite reaction is that there are hundreds of thousands of people that are jumping off that industrial ship and discovering home education or chiropractic or homeopathy or rediscovering their kitchens and domestic culinary arts or gardening.

In the gardening catalogs, the seeds are sold out. Who would have guessed!

There is a tremendous amount of movement in the culture that is responding in a positive way to the things that many of us are very concerned about. It is a great time of disturbance in the culture, but disturbance is always the precursor of innovation in any field.

And of course, we know that it's always the darkest right before the dawn.

More: Read part one and part two of the Earth Eats interview with Joel Salatin.