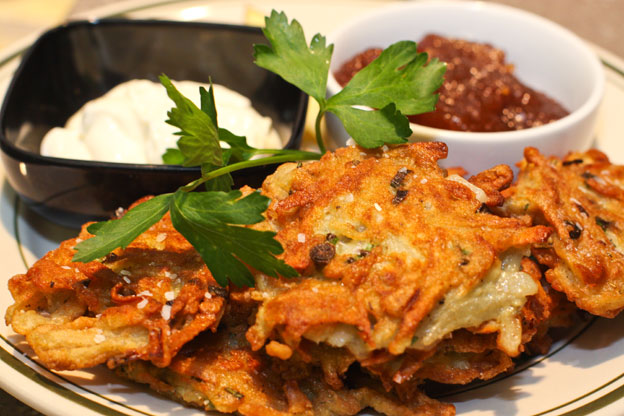 Two recipes on the podcast today â€“ potato latkes, a simple and versatile potato pancake that isa staple of Hanukkah celebrations, and then carrot, apple and sweet potato tzimmes, a dish of root vegetables and dried fruit simmered in honey that is often served at Rosh Hashanah.

But first, a bit about passover. This year passover begins at sundown on March 29 and then goes until April 5.

A Seder traditionally marks the beginning of Passover â€“ it's a time for families to gather around the dining room table recount the Biblical story of Exodus, as told through food.

On The Podcast: Earth Eats' Megan Meyer went over to the local Hillel Center to talk with Executive Director, Rabbi Sue Shifrin, about the highlights of a typical Passover Seder dinner.

This take on potato pancakes is a dish that people grow up eating at big family meals, especially during the festival of Hanukkah.

This dish of carrots and other root vegetables and dried fruits stewed in honey is traditionally served during Rosh Hashanah.

It's also a great dish to make this time of year, right before your garden starts to take off. Pick up some root vegetables and give it a shot.