Janet Poppendieck: The History Of School Food In America 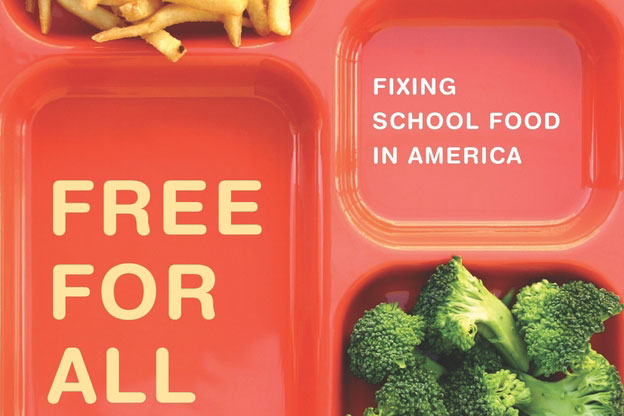 Janet Poppendieck is the author of the book Free For All: Fixing School Food in America. She joined Earth Eats again back in June to discuss school lunch policy reform and history, and how society as a whole is impacted by the workings of the federal school lunch program.

Megan Meyer (Earth Eats): Tell us a little bit about your ambivalence to calling attention to childhood obesity?

Janet Poppendieck: I kind of think of myself sometimes as a childhood obesity opportunist. I think the concern is merited. I think the problem is real. And I think there's really an emerging movement in response to it. So I want to harness that for better food for our children in schools. But I don't like framing the issue as obesity, for two or three reasons.

One is a health reason â€“ There's a lot more wrong with our childrens' diet than just that it's making them fat. There are many children who are normal weight who are still not eating well. They are not getting all the micronutrients and vitamins they need. They're getting a lot of highly-processed and over-processed food and for various reasons it's not making them fat yet. But there are still health concerns.

And the other part of it is â€“ I know wonderful people who have made major contributions who come in all shapes and sizes. I don't like the focus on the cosmetic aspects of obesity. Although everyone who talks about it now says, "I'm talking about a health issue here, I'm not talking about appearance."

In our culture, there's a huge emphasis on appearance and I think it distorts the relationships between people.

MM: Before we delve too deeply into what's happening now with school food, I want to talk about how school food became a federally-subsidized program. You describe it in your book almost as a string of accidents -- that the US government sort of stumbled upon that responsibility.

JP: In the depression of the 1930s, farm surpluses were the biggest problem in the agricultural economy. Depression had started in the farm sector much earlier than in the industrial sector â€“ really, shortly after the end of WWII, when prices collapsed in American agriculture.

And if you have a few big firms making steel and there's an oversupply, they can cut back on production and the price will go back up. Supply will go down, the price will go up. But when you have millions of individual farmers, cutting back on production by one farm doesn't reduce the overall supply enough, so farmers tend to work harder and produce more when their price goes down. They're competing for a greater share of a sagging market, so surpluses then build up and it becomes a cycle.

That had been happening all through the Twenties, when the Roosevelt administration came in they wanted to reduce the glut of hogs in the coming cycle, so they contracted to buy baby pigs from farmers. Rather than have the farmers keep them and have them grow up to be big hogs, the Secretary of Agriculture agreed to purchase them as little pigs.

And farmers just flooded the terminal markets with baby pigs. And the baby pigs escaped because the pens were built to contain big hogs and not little pigs. Little pigs went squealing down the streets of Chicago and Omaha. A lot of public sympathy for the baby pigs was expressed.

And then the stockyards needed to figure out what to do with the baby pig carcasses because they wouldn't fit through the machinery for butchering. So they ground them up for something that's called tankage. It's essentially a kind of liquefied pig.

They dumped that into rivers and quarries and then the weather turned hot, blue flies came and big stench arose and it made headlines all over the place. It was a public relations disaster. But Franklin Roosevelt was a public relations master and he responded to it by saying, we're going to take the pigs from the pig slaughter and we're going to distribute this as food to the unemployed and we're going to create a federal corporation to rescue the farm surpluses and give them to people in need.

MM: What kinds of problems did you see during your first-hand research and also your academic research in school nutrition and school food?

JP: A very shorthand answer is that I saw a lot of monochromatic meals. I saw a lot of what you might think of as golden meals â€“ a breaded chicken patty, chicken nuggets, a roll, and an order of potatoes of some sort, usually fries, either fried fries or baked fries or some sort of tater-tot-like product .

In general, monochromatic meals are almost never healthy meals, because there's a lot of association between nutrients and colors. But the way we get those monochromatic meals in the school food program is an interaction of two different sets of federal policies.

First, there's the nutrition regulations â€“ and there are two approaches to menu planning in a school food program. One is called "food-based" and the other is called "nutrient-based."

In the food-based approach, which is the older approach and the one used by the majority of school systems, the meal has to include five components: a serving of fluid milk, a serving of meat or a meat alternative â€“ that could be peanut butter, it could be beans, it could be meat or fish â€“ but a two-ounce serving, a serving of grain, a fruit and a vegetable.

You have those five components, but if you count potatoes and corn as vegetables â€“ and the regulations do count them â€“ you can end up with a very starchy meal, because if your grain serving is a roll and you add a starchy potato as a vegetable or corn â€“ and biologically, corn is a grain and it has pretty high starch content also. And if your protein is coming with a breaded covering such as nuggets and patties doâ€¦ That's where we get those golden meals.

The other thing that feeds in here is something called "offer versus serve," a policy that was created in the late 1970s in the wake of a big scandel about plate waste in school food. The Chicago Tribune did a big expose about how much food was going into the garbage, and it really was shocking.

And the result was that we can count the meal as reimbursable if the students choose any three of the five components. So the school has to offer all five â€“ the ones I laid out â€“ but the student can choose just three. So that means you would have a reimbursable meal if you had milk and a hot dog roll and a pear, but most of us would not think that was a very nutritious meal â€“ although better than a hot dog roll and an order of French fries and a pear.

It was done for good reasons, but it often backfires. And in the end of the book, I said I think we would have better meals if "Eat Your Colors" was our primary standard. I think we need to revamp the nutrition standards.

Stay tuned for Part II of our interview with Janet Poppendieck. In it, she talks about the importance of teaching kids about food, how the current school lunch program often encourages class segregation in schools, and how conflicting standards have led to junk food and empty calories being served in cafeterias.