In China, Quarantine Challenges Cooks To Get Clever 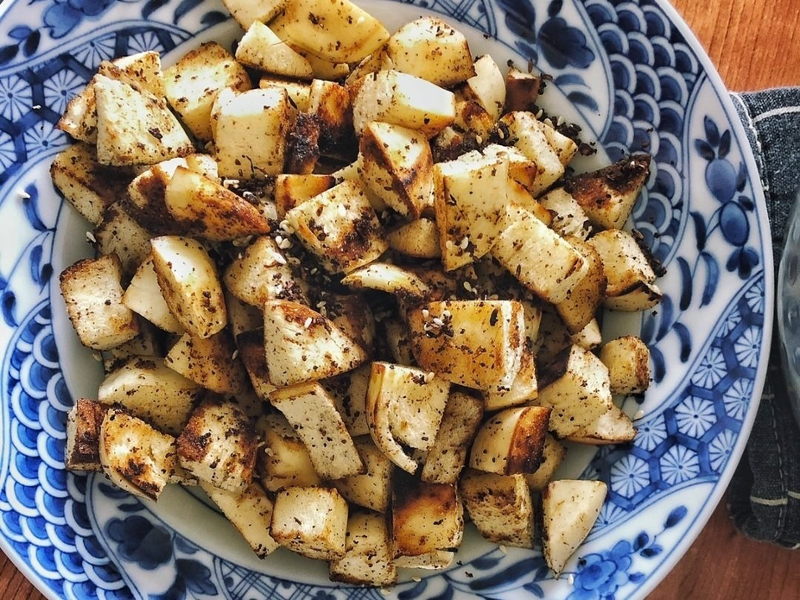 Stir-fried mantou buns with cumin and chili. Food bloggers Stephanie Li and Christopher Thomas have eaten the small steamed bread often while on lockdown during the coronavirus outbreak. They had been working on a recipe for the buns before the virus hit, so they had a large supply of the ingredients. "Wanted a new way to finish it up, so stir frying it is," they wrote on their food blog. (Stephanie Li and Christopher Thomas/Chinese Cooking Demystified)

As cities across China remain on quarantine lockdown to contain the spread of the new coronavirus, the epidemic is testing the country's ability to get food to its citizens.

Restaurants and cafes have been closed since the end of January, leaving grocery stores as one of the few options for buying food. With families encouraged, or sometimes forced, to stay at home, supplies are often hoarded. Shipments of food from other cities across China take time, as many places have closed off roads.

For food bloggers Christopher Thomas and Stephanie Li, passing the time inside has meant making the most of what's in their pantry — and getting creative.

"When the news originally hit, it was very difficult to get fresh vegetables," Thomas tells NPR.

The couple lives in Shunde, China, a few hundred miles from the epicenter in Wuhan, but their city is still mostly closed and deserted. They run a food blog called Chinese Cooking Demystified, which focuses on traditional Chinese recipes. Their YouTube cooking channel features videos on how to make "the same taste that you'd get in China."

Li says their local grocery store gets a fresh shipment of vegetables just once a day, but most of the highly sought-after items, like cilantro, scallions and leafy greens, are snapped up just a few minutes later. Hearty staples like broccoli and yams always seem to be available, Li says.

"You start to approach cooking a little bit differently. You're not going into the kitchen thinking, 'OK, this is kind of what I have a hankering for.' You really kind of look at what can you do to really make the best possible thing out of that," Thomas says.

They recently paired a Chinese vegetable stir-fry with homemade flour tortillas, Oaxacan cheese and fermented soybean chili sauce. "Kinda like fajitas," Li wrote on Instagram. "It was so great! We accidentally discovered something awesome! Restaurants should totally do this kind of meal."

They've also added sausage to a breakfast Dutch baby. And Thomas made a Cholula-style hot sauce out of Chinese chiles (one of the few ingredients found in abundance still, he says). And they've eaten a lot of soup broths made out of dried mushrooms.

"Before, we do a lot of testing and we would have a lot of ingredients. And we usually buy too much," Li says. "But then this whole experience makes me think about how you can approach all the ingredients and food you have on hand without wasting it."

They hope others in China will be inspired. Their meal photos are posted on Instagram with the #cookupinlockdown hashtag. Instagram is blocked in China, but Thomas and Li use a VPN to skirt the firewall.

Li says food has become a major topic on Chinese social media. With much of China under lockdown, people have started devoting their free time to cooking.

"There's this interesting phenomenon because almost everybody [in China] is in lockdown. So you don't have much to do at home and people just start cooking," she says. "Now there's this kind of running joke or meme on the Chinese Internet that [since the lockdown started in late January] everybody's just become such a great cook."

Thomas says people are teaching themselves to cook more difficult dishes, both out of necessity as well as out of boredom.

As for food shopping, the couple places grocery store orders online that get delivered. If they want to pick out their own food, they head to a nearby convenience store, which Thomas says has remained well stocked. But it's not selling anything fresh.

"The 7-Eleven right downstairs has those little packaged kimchi, and that was really scratching my fresh vegetable itch for a while," Thomas says.

He says they're lucky because their apartment building has no confirmed coronavirus cases, so residents can actually go outside. Some buildings are completely locked down. But the couple plays it safe and rarely leaves, maybe once every other day. Thomas says that when they do go outside, they see only "a couple of people" on the streets.

Thomas and Li hope that for those in China who can see the couple's posts, they will be inspired to eat well with limited ingredients. But the two are also hopeful that the end of the quarantine is near. Thomas says outdoor markets with fresh vegetables have begun to reopen in Shunde.

"The first shipment from the market was like a breath of fresh air," Thomas said.

Listen to the story here.