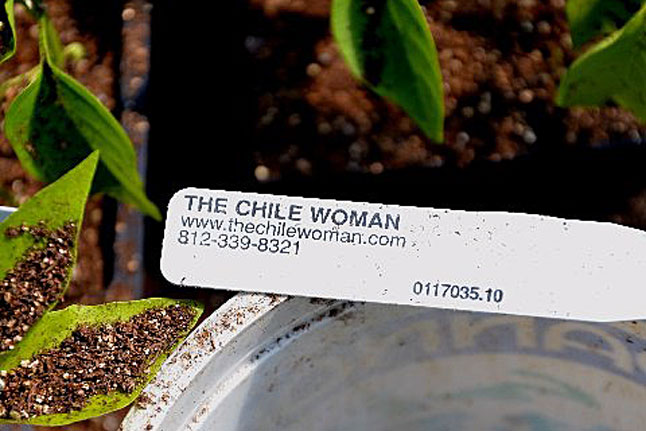 The ABC's of Pepper Plants

Susan Welsand has developed a technique for keeping track of her 1,600 varieties of chile plants -- she alphabetizes them. "That's how I plant," she says. "Makes everything really easy to find."

As her business has expanded over the past 20 years, she's noticed one significant change: the education of the consumer.

"People are real specific about exact peppers they want that have unique flavors to them," she says. When she first started out, people were looking for standard peppers like poblanos, jalapeños and serranos. But these days, she's seeing an increase in demand for Chilhuacles and "superhots," like the Bhuts, Nagas, Scorpions and Seven Pots.

Her customers include not only local folks who stop by her farm or shop at the area farmers market, but chile lovers in every one of the lower 48 states.

Living in southern Indiana hasn't limited the sorts of peppers she can grow. In fact, she says she hasn't found a pepper that won't grow here. "Anything will grow in a greenhouse given water and a lack of freezing temperatures," she says.

She starts sowing the pepper seeds in her germination greenhouse in mid February and then she plants them in June when the soil is nice and warm. The peppers are usually ready to harvest in late July and early August, and the plants continue to produce until the first frost.

Pepper plants aren't fussy. She waters them well when they are first planted, "and that's about it. Last year when we had the drought, I actually never watered the chiles and we had good harvest."

Dry temperatures also enhance the heat of a pepper. When the plants get stressed from lack of water, that increases the capsaicin -- the thing in a pepper that gives it its heat. "Some people don't water their peppers on purpose," she says.

Flavor Without The Heat

Welsand appreciates a super hot chile, but she prefers one that packs as much flavor as it does heat. Her favorite is the Arrivivi Gusano from Bolivia. "It's a little white chile," she says. "It's very hot but with fantastic flavor."

For customers looking to add a peppery flavor to a dish without infusing it with heat, Welsand recommends sweet habaneros. They have a fruity aroma that perfumes the whole kitchen. "I use those when I'm cooking for kids," she adds.