Homebrewing 101 With The Bloomington Hop Jockeys 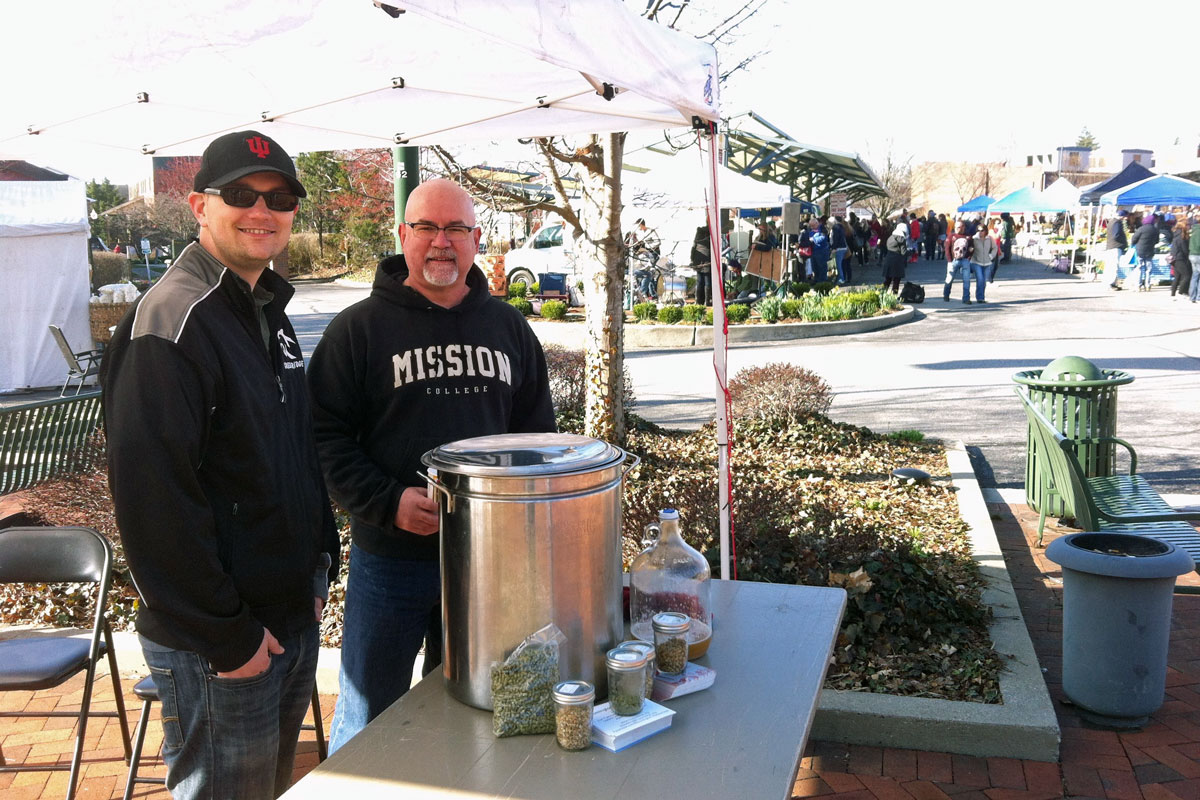 Mike Kersulov mixes up hot water and crushed grain in a re-engineered cooler, using parts he bought from the hardware store. He's added a spigot to the bottom of the cooler, and fashioned it with a special steel filter that's normally used for plumbing.

It's all part of a home-brewing demonstration at the Bloomington Farmer's Market. Kersulov is working on a special recipe that's personal to him, in a beer-making process called "all-grain."

The all-grain method is the intermediate level in terms of homebrewing difficulty. But at its essence, it's still a fairly simple process. You take crushed grain-Kersulov used seven pounds of a grain called British 2-row-and to that grain, you add warm water. As the water mixes with the grain, sugars are extracted. Those sugars will become the fuel for the brewing process once the yeast is added later.

But first you have to filter out the grain-that's where the steel filter comes in. What remains is a sugary, watery by-product called the wort.

"[It's] more or less making like an oatmeal soup," Kersulov said simply. "That's all what beer is, is making oatmeal and adding some hop and yeast, that's it."

The hops add flavor, and the yeast eats the sugar to create the alcohol during the lengthy fermentation process.

The actual all-grain method is, of course, more complicated than this simplified version. It involves specialized equipment, some science know-how for concepts like "coagulating proteins" and "activating enzymes," a healthy amount of patience, plus a little creativity.

Kersulov has learned many of these things during his time with the Bloomington Hop Jockeys.

Kersulov is the current Events Coordinator of the Bloomington Hop Jockeys, an organization of homebrewing enthusiasts that meets once a month at Upland Brewery's tasting room. They've been meeting since 2004.

Jason Mundy has been a member of the Hop Jockeys for even longer than Mike, going on 10 years now. Despite the numbers being down in this last year, Mundy seen interest in the club grow from when he started.

"That first night that I went I think there was like eight people in there," Mundy said. "Now I go to a meeting and there's like 30."

So who are these Hop Jockeys? Homebrewers tend to be tinkerers and learners.

Mundy said, "you know it seems that half the people at the club are in some kind of engineering field, and the other half seems to be grad students at IU."

The Hop Jockeys club is all about promoting beer-making in Southern Indiana. They do this by sharing recipes, and by tasting each others beers to find out what they like and don't like. And they share the ways to create their equipment, all part of this "tinkerer" mentality.

While the Hop Jockeys have been encouraging amateur beer-making in the past 11 years, there's also been an increase in the amount of professional craft beer in Bloomington.

When asked about the expansion of craft beer in Bloomington, Mundy said "now there's just so many that it's hard to keep up with all the different breweries out there."

However, the Hop Jockeys can be held at least partially responsible for that. Take Steve Llewellyn, the brewmaster at Function Brewing, which opened in 2014. As Mundy pointed out, Llewellyn used to be a club member from years ago.

Back at the demonstration, Kersulov explains some of the science behind beer-making. His grain and water mixture will have to sit for about an hour, and at that point he'll add even more water to it.

[It's] more or less making like an oatmeal soup. That's all what beer is, is making oatmeal and adding some hop and yeast, that's it.

"That will enable a lot of the sugars from the grain to get into the water and become a wort," he explains. "And that's what we want is those sugars, because you add yeast to this much later after it's boiled and everything, the yeast will eat the sugars and it will create alcohol as a byproduct."

At this demonstration, the Hop Jockeys are doing just the first several steps of the brewing process. Arguably, the most important step-the fermentation-is omitted, because that can take anywhere from several days to a several weeks to complete. This is step is the easiest, though. All you have to do is let it sit.

This means that Kersulov won't be able to enjoy his beer for a few weeks, which is fine for him. Beer-making is just a hobby for Kersulov, not anything professional.

Because his beer-making is a personal endeavor, his recipes can also be personal to him. The beer that he has been making today is a special one he found called "Poe's Boston Bitter," an English style bitter that's meant to replicate an ale that was around in the U.S. during Edgar Allan Poe's time.

"[Poe] was a big drinker of ales," Kersulov added. Whether or not Poe drank this particular ale, Kersulov wasn't sure. But as a former high school English teacher, Kersulov said that "finding a literary connection is always great."