History Of The Supermarket: A Piggly Wiggly Past 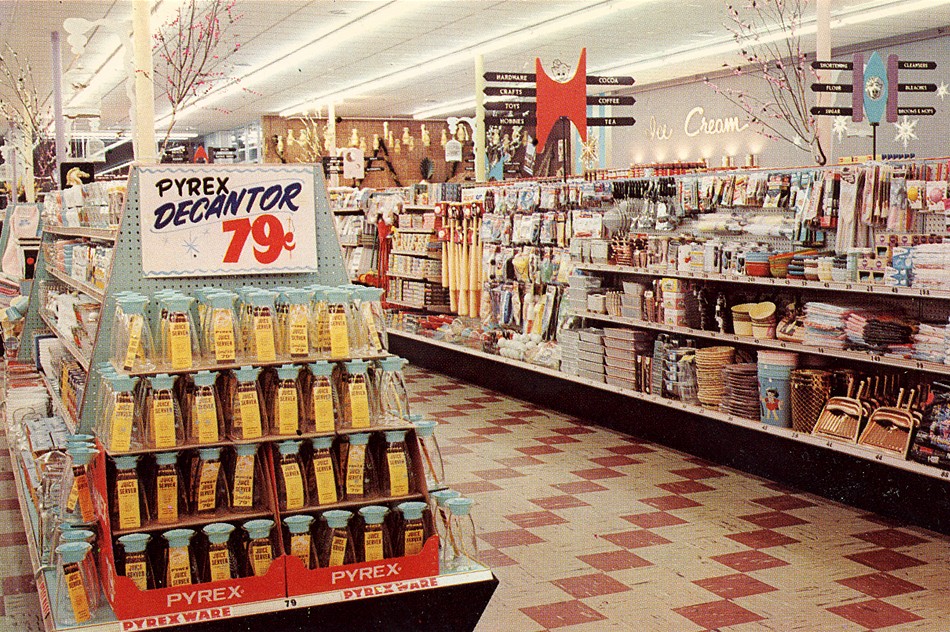 Michelle Obama's Let's Move! campaign has shone a new light on food deserts throughout 2010 and the first half of 2011. This, in turn, has caused the media to pay attention to the distribution of supermarkets across the country, as their presence is a major determining factor in defining food deserts.

But, as Earth Eats pointed out, this emphasis on supermarkets is not without its problems.

Few have commented on the relative novelty of the supermarket phenomenon, however.

September 6, 2011, was the 95th birthday of the self-service shopping experience born in the United States and now common throughout much of the world.

On that date in 1916, the first Piggly Wiggly store opened its doors in Memphis, Tennessee, with the radical idea that stores could save money by putting their stocks on shelves and allowing the public to wander through them, gathering their selections in a basket and paying before they left.

Before Piggly Wiggly introduced its self-service system, shoppers would provide their grocery lists to store clerks, who would gather the items from stock shelves on their behalf.

The transition to self-service model allowed grocers to operate more efficiently by replacing the need for large numbers of clerks with only a few cashiers.

Piggly Wiggly was a grocer. At the time, the word "grocer," like "butcher," "baker" or "produce vendor." While shoppers would go to butchers to buy meat and bakers to buy bread, they would go to grocers to buy dry goods, like flour, sugar, coffee, and canned items.

Prior to the 1930s, shoppers in the United States generally had to travel to several different locations to buy the different foods they needed.

As early as the 1920s, some grocers began to experiment with offering meat counters or small produce sections.

The more important ancestor of the supermarket was the "drive-in," where independently-owned grocers, bakers, butchers, and produce vendors would set up shop in a common space, sharing a large, free parking lot, and allowing customers to get all of their shopping done in one place. Patrons often thought of these drive-ins as a single business, even though each subset was independently owned.

In 1930, the first supermarket that looked something like modern supermarkets opened in Queen's, New York. It was called King Kullen.Most of its items were sold directly out of packing crates, with no real attention given to the appearance or style of the place.

Self-Service + Multi-Function = Shopping As We Know It

By the late 1930s, major self-service grocers like Piggly Wiggly and A&P had begun to expand their services to include produce sections and in-house butchers and bakeries.

By 1950, the transition to supermarkets similar to the ones familiar to most Americans was complete.

The development of the supermarket fundamentally changed the way Americans made their decisions about food.

The advent of self-service food shopping required food companies to consider marketing and branding of their products. Decisions regarding which products to buy came to depend less on quality and price, and more on the eye-catching appeal of the product's packaging.

Having various kinds of food available under a single roof increased the nation's reliance on cars, because customers shopping for their families would rarely walk away with grocery loads they could carry.

Some economists even argue that the time-saving benefits of the supermarket contributed to mid-century women's liberation movements by significantly reducing the amount of time that most women had to devote to food shopping.

They also, for better or for worse, made food more affordable by reducing the overhead required to sell it; this was the major force behind its rapid growth across the U.S.

Hypermarkets like Big K and Super Wal-Mart, as well as online retailing, are probably the newest frontiers in the evolution of supermarkets. For now, though, the supermarket remains the most important food retail model in America.