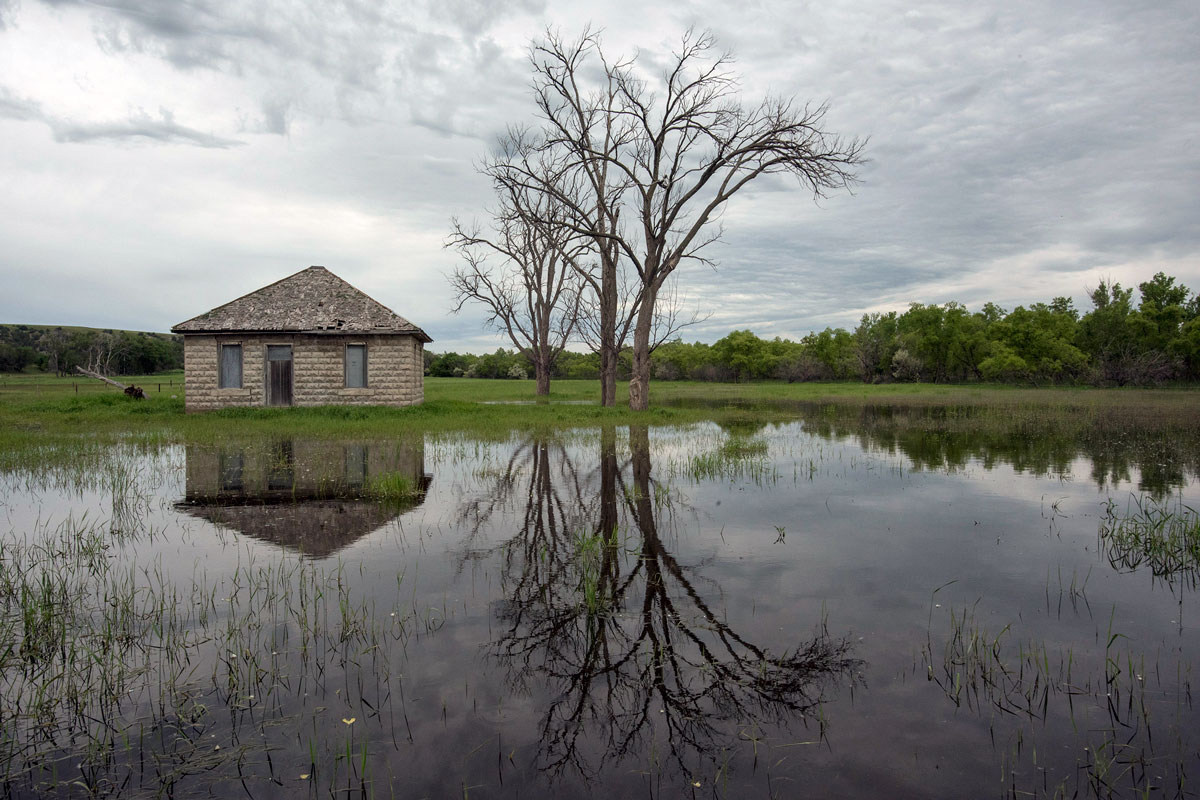 Wet spring and summer rains soaked much of the High Plains this year. The Platte River, which runs through Colorado, Wyoming and Nebraska before emptying into the Missouri River, saw historic flooding.

Standing on the bank of the Platte River at Audubon's Rowe Sanctuary near Gibbon, Neb., conservation director Andrew Pierson points upstream to where a few disheveled trees spot the wide-open stretch of sand and water.

"This spring you couldn't really even see the river, more than, maybe about a mile," Pierson said. "It was pretty heavily vegetated. We had a lot of young cottonwoods and other trees that had become fairly established again on a lot of our bars."

Like other conservation groups on the central Platte, Audubon routinely clears vegetation from the river channel to improve habitat for cranes and other species.

"We were, at the beginning of this year, looking at a really large project this fall as far as clearing bars in the river," Pierson said. "The high flow that we had, both volume and duration of flows, did 80 percent of that work for us."

All that water scoured tons of vegetation from the river channel. Pierson said now, the newly-created swath of flat, bare sandbars and braided river channels will make for ideal habitat for cranes next spring.

The amount of water in the Platte River this spring and summer was way above normal. In fact, nearly the entire average annual flow of the Platte River surged past the U.S. Geological Survey's gauging station at Duncan, Neb., in just two months.

It's a fairly regular occurrence. Just something that we tend to forget about.Â And the next time it comes around it will seem like a big deal again.

"In the upper part of the Platte Basin, in May we had an extraordinary amount of precipitation in Colorado, particularly out on the Great Plains it was well above normal," Zelt said.

In some cases more than 150 percent higher than the long-term average. And it wasn't just Nebraska. Parts of Colorado, Wyoming, South Dakota, Kansas and Oklahoma also got a lot of rain. That drove up water levels stored in riverbanks and underground.

"That, combined with a later than normal snowpack runoff has meant that we've had high flows for an extraordinary long duration this year," Zelt said.

All that water filled Nebraska's Lake McConaughy to the brim. All that rain meant farmers didn't need irrigation water as early as usual, so water managers diverted some water into canals to seep down and recharge the groundwater. Flows on the river haven't been this high in 30 years. But they're not unprecedented.

"The river can get much higher than this and it has in the past," said David Pearson, a service hydrologist with the National Weather Service in Omaha.

"Typically in the spring, the Platte River can jump very quickly above flood stage and we'll see flooding very easily from ice jam flooding and even some rainfall. But then it comes back down again. So the height of it isn't the interesting part, it's the duration," Pearson said.

In central Nebraska, the Platte River was at or near flood stage for close to two months, submerging crop fields and pasture near the river and damaging bridges and fences.

That had mixed impacts on the ecosystem and wildlife habitat, said Jerry Kenny of the Platte River Recovery Implementation Program.

"It moved a lot of sand around. It scoured in places, it deposited in places. The river got into places that used to be in the channel that it hadn't been in a long time," Kenny said.

All that water helped some plant and animal species move around, including undesirable ones like invasive species. It flooded out some birds that nest on the ground or on river sandbars, but encouraged visits from others, like uncommon shorebirds. Some plants were underwater too long to grow, while others, well-irrigated, took off as soon as the water receded.

"It was an event that we couldn't have come anywhere close to creating in any sort of managed fashion," Kenny said, because upstream dams would never intentionally release that much water at once. More than three-quarters of the volume of Lake McConaughy ran through the Platte from mid-May to mid-July.

"It is an opportunity to learn a great deal from an event that doesn't come along that often," Kenny said.

Some changes may not be evident until months from now. Overall, Nebraska wetland biologists agree this event fits into the Platte's natural variability and ecosystem resilience. It also shows the power of nature against human efforts to control the river.

Because while this year's river levels seem huge, in the era before we built major dams and diversions upstream, this amount of water would have been common, said Robert Swanson, director of the USGS Nebraska Water Science Center.

"It's a fairly regular occurrence. Just something that we tend to forget about," Swanson said. "And the next time it comes around it will seem like a big deal again."

Swanson says there's always potential for big storms on the Great Plains. And with a changing climate and warming atmosphere, more intense rainfall looks more likely in the future.

This story was produced by NET Nebraska and the Platte Basin Timelapse project.