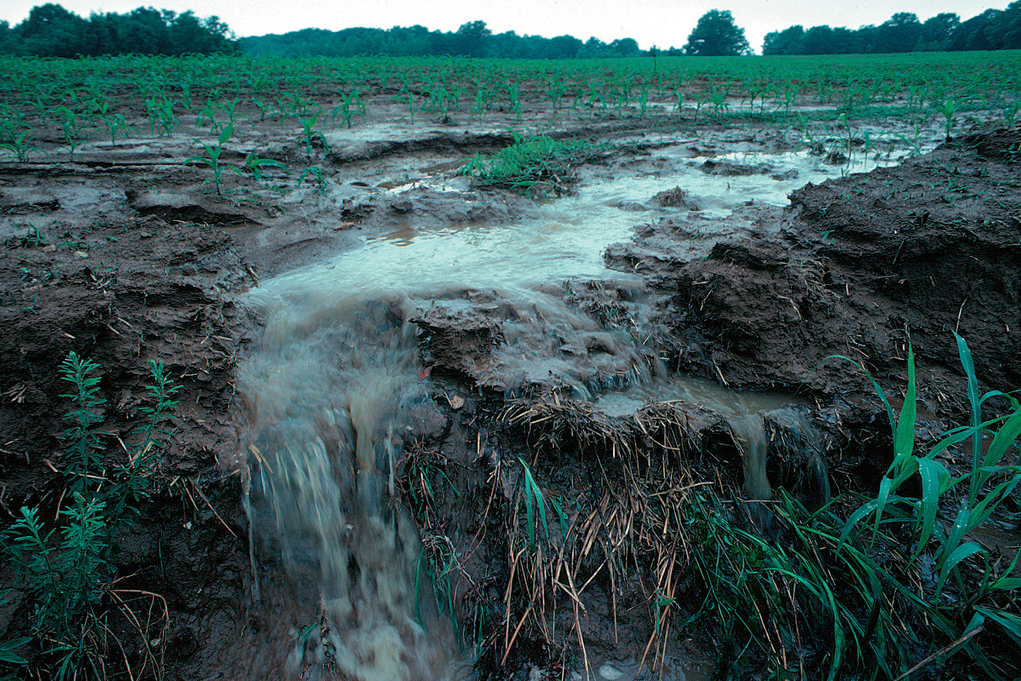 Soil is washing away from farmland up to two times faster than current estimates from the U.S. Department of Agriculture.

The USDA uses a complicated formula to determine how much farmland sloughs away each year. The calculator, known as RUSEL2, crunches slope, rainfall and farming practices to estimate soil loss on a given plot.

But those estimates are missing a critical factor, says Richard Cruse, an agronomy professor and the Director of Iowa State University's Iowa Water Center. RUSEL2 calculates two types of erosion, called "sheet" and "rill." The formulas that the system uses were written decades ago based on measurements taken on small plots of land.

We're looking down the barrel of a gun and we're not prepared for what's coming.

Cruse and his research team used 3-dimensional images to measure otherwise hidden soil loss from "ephemeral gullies" that gouge through large fields when it rains. They're still doing the math, but Cruse said these rivulets could ferry between 30 and 100 percent more soil per acre than USDA figures.

The USDA is aware of the issue and has dedicated its own team to measure the additional erosion.

"Up until now we haven't had the tools that would allow us to make those estimates," Cruse said.

Farmers often fill in those gullies so they can use the space to plant more crops, but that soil ends up washing away just as quickly during the next downpour.

The Environmental Working Group called the resulting runoff a "potent stew" of agrochemicals, bacteria and pollutants that poisons watersheds.

The government considers erosion to be "tolerable" if the amount lost could be replaced in the same amount of time. Right now, that level is set at 5.1 tons per acre. But Cruse said the current threshold is unrealistic, with the real rate of regeneration more like a half ton of soil per acre annually.

Cruse has asked agency officials why the standard was set so high. The answer, he said, was a strategic one-better to give farmers a reachable target that will encourage them to conserve soil.

"We should not be telling people something that's not valid," Cruse said. "We're looking down the barrel of a gun and we're not prepared for what's coming."

Underestimating erosion points to some hefty policy implications. The 2014 Farm Bill shifted much of its direct payment program to crop insurance subsidies. The good news, environmentalists say, is that for the first time in nearly two decades, the bill requires farmers to come up with a conservation plan to qualify for subsidized crop insurance for land that's particularly vulnerable to erosion. But that 5.1-ton threshold-the one that doesn't count erosion from ephemeral gullies-is what the USDA uses to determine who qualifies.

"If you're getting taxpayer money, you need to find a way to keep that soil in place. And you know, we can," Cruse said.

He said rotating crops and knitting them together with livestock operations would help maintain topsoil, reign in pests and weeds and boost yields without relying on chemicals alone.Â But he said the crop insurance program effectively discourages farmers from diversifying their crops, which is a key methodÂ for stanching topsoil losses.

"I'm not advocating going back to the 1920s. But there are things we learned in the 1920s that could be used in conjunction with more current science that we have today."