Give The Gift Of A Homebrew Kit, Change A Life 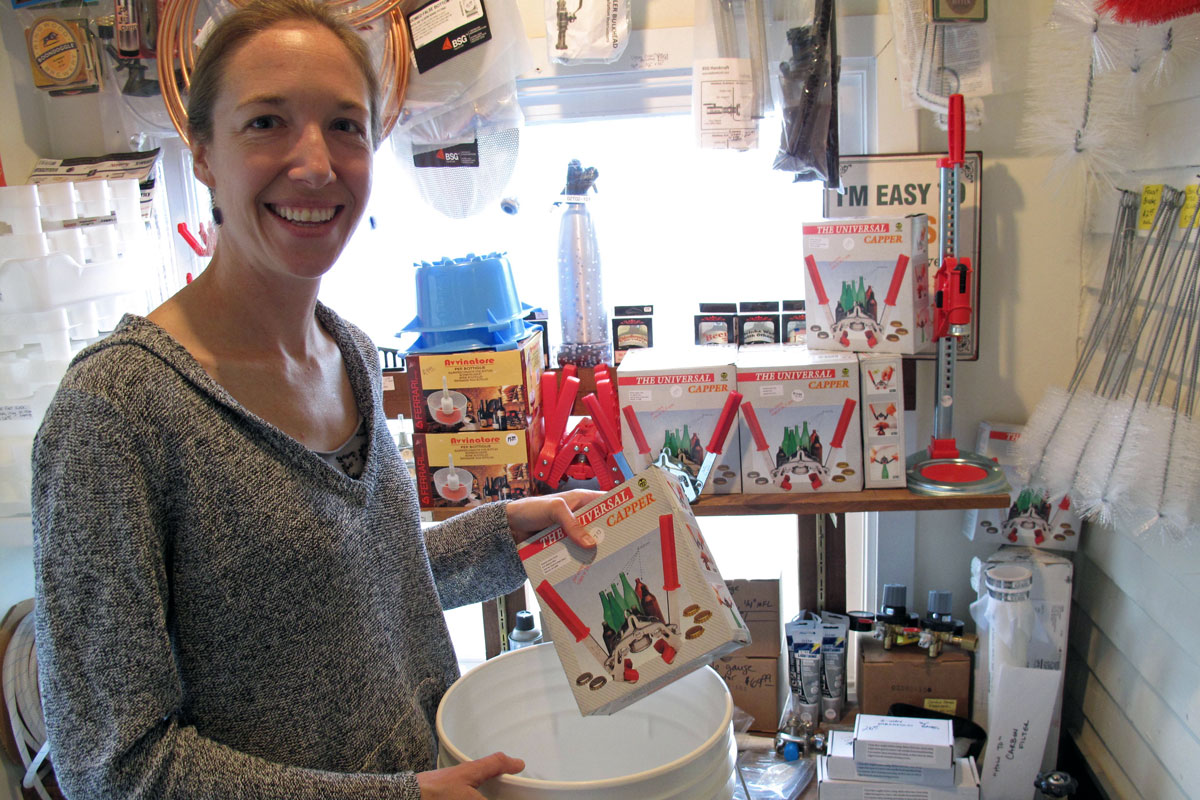 A Gift Becomes An Obsession

Lauren Whitson has a knack at giving great gifts. "I just really like thinking about, you know, what people really enjoy and what their passion is," she says.

Her skill was tested back in February. It was a dual gift for Valentine's Day and her fiancé's 25th birthday. She knew she wanted to get him something related to beer, so she started thinking. "He really likes to really nerd out real hard," she says. "He works in a microbio lab. We met in a microbiolab, so I was like ‘Okay, how can I combine this with his love for beer?'"

So, she bought a homebrew equipment kit and all the ingredients to brew a hefeweizen.

He was hooked, immediately. "It's the artform of it, of getting to make a product that I can also give to people and get feedback on, but then I also love the nerding out, science side of it."

‘Tis The Season To Start Homebrewing

Lauren went to Butler Winery, Bloomington's homebrew and winemaking shop, to buy the kit. She spoke with manager Amy Butler.

It's a calm Friday morning in the store, but Amy says the day is young. "This time of year, it can get kind of crazy in here. It's fun. It's what makes it exciting." They can sell up to six basic homebrew equipment kits every day between Thanksgiving and Christmas.

One of the most valuable services Butler offers is Amy's advice. In many cases, that's what draws new-to-homebrewing customers to the shop. Today, she chats with a customer about stainless steel homebrew equipment; it will be a holiday gift for her husband.

Amy married into the Butler family and started working for her in-laws in 1998, so she's seen the homebrew scene develop over the years. She remembers 2012 well. That year, she couldn't restock the store fast enough.

We've had so many breweries opening up, now people can spend their craft dollar on beer already made, because there's good beer all over the place now.

"That's when brewing really hit the ceiling, I would say, for us," she says.

Nationally, the boom in homebrewing goes back to 2005. Gary Glass is the director of the American Homebrewers Association, based in Boulder Colorado.

"One thing we've seen is that a lot of the growth in the last ten years or so has come from a younger generation," says Glass. "Millennials seem to be particularly inclined to get into this hobby. And so, we've shifted in demographics from people more in their 30s and 40s to now more in their 20s and early 30s."

He says they didn't even have 10,000 members in 2005. Then more and more millennials turned 21, and now the group's membership has topped 44,000. He chalks some of that up to another trend in beer. "I think a big part of it is the growth of craft brewing, which kind of goes hand in hand with the growth of homebrewing because most of the craft breweries in this country are started by homebrewers."

But Amy Butler speculates that the explosion of craft beer has actually hurt her shop. Butler has seen slumping sales since their peak three years, "And then since then, we've had so many breweries opening up, now people can spend their craft dollar on beer already made, because there's good beer all over the place now. In Indiana alone, we have over 100 breweries."

And for the most part, she says, the brewers who run those brewpubs -- and who used to be her customers -- aren't buying supplies from the local store anymore.

Another Homebrewer Bites The Dust?

Ten months after that first batch of hefeweizen, Jimmy always got something brewing.

He stores his equipment in the guest bathroom because that's the most temperature-stable and least light-exposed area in their house. In bottles, there's an India red ale, a pumpkin-spiced porter and German chocolate stout. In the carboy right now, a pale ale using some experimental hops he bought from Butler Winery.

"And then these ones I'm actually really excited for right now. This is my Gose. It's a German-inspired tart beer. It's like a Berliner Weisse except it's got a little salt and coriander in it to spice it up and give it a nice little refreshing hint," he says. If all goes according to plan, he'll be able to share this brew with family over Christmas.

Jimmy had planned to go into virology for his career, but now he and Lauren are starting to look into graduate programs where he can study homebrewing. Some day, he wants to do this professionally.

But even when it does become his job, Jimmy says he'll never stop brewing small batches at home.