The 'Ghost Geography' Of Midwest Farmland 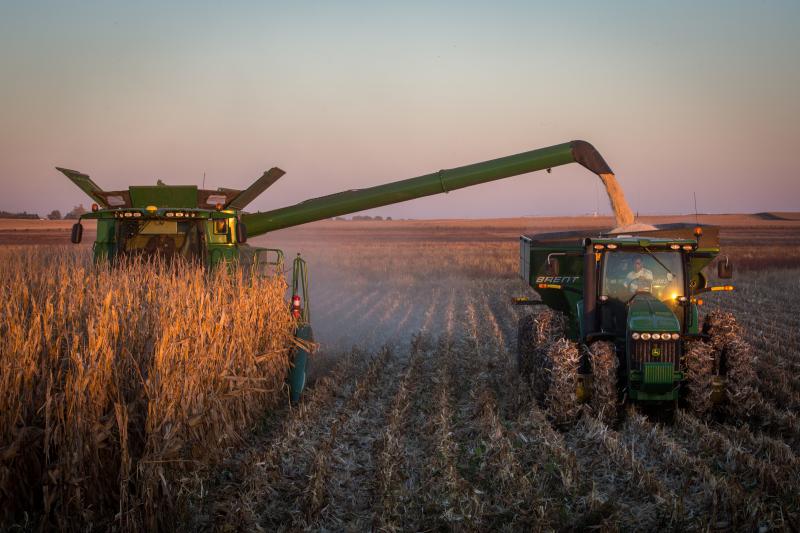 Every year on the farm has its challenges. There are weeds, insects and random hailstorms. Unpredictable global markets can make or break a profitable crop. Recent years, though, have been especially troubling for the Hammond farm in York County in eastern Nebraska.

Rick Hammond raises corn, soybeans and cattle with his wife, Heidi, on land that has been in her family since the 1870s. Their daughter, Meghan, recently joined the farm with her husband Kyle Galloway – the sixth generation of the family to farm the land.

The farm economy for the last four years has been in a slump that many compare to the Farm Crisis of the 1980s. Times are tense and profits are hard to come by.

That's the conflict that author Ted Genoways entered when he set out to chronicle life on a modern family farm. He wrote about the Hammond family for Harper's, the Food and Environment Reporting Network and in a new book, This Blessed Earth: A Year in the Life of an American Family Farm. The book follows the Hammond family farm over the course of a year, detailing daily obstacles like a critical breakdown during soybean harvest and spring planting interrupted by rain.

For instance, farm debt is set to reach the highest level since the ‘80s Farm Crisis. The USDA projects total farm debt could reach nearly $390 billion in 2017. For a farmer like Rick Hammond with personal memories of the 1980s, debt is a constant consideration.

"No matter how good it looks on a family farm, there's still a lot of stress," Hammond told Genoways. "And when you build a farm and ground is very expensive, why, you get into long-term debt. So then there's always that monkey on your back that ‘Oh, I've got to produce. I've got to make this work.'"

According to Genoways, the history of farmers consumed by debt still marks the landscape surrounding the Hammond farm with a kind of "ghost geography," a leftover of the Farm Crisis that forced so many farmers to sell their land, or lose it in bankruptcy.

"I'm always struck listening to the Hammonds talk about their ground. They almost always refer to it by the name of whoever they acquired it from," Genoways says. "That always seems to be informing their decisions. They don't want somebody else with a different last name referring to their ground as ‘the

At a time when it can be hard to find steady profits in agriculture, the Hammond family has tried alternatives they hoped would allow them to establish a more lucrative niche. For a time, they planted organic white corn and raised grass-fed cattle, but it never worked financially.

These days, they raise the same conventional varieties of corn and soybeans as their neighbors and try to play the global markets to their financial advantage. Genoways says it's a sign that even when a farmer may sympathize with the ideas behind organic agriculture or likeminded segments of the farm industry, whether or not they use those farming methods often comes down to more than personal ethics.

"I think a lot of people are under the impression that they can change the food system by what they buy at the grocery store and it's really not that simple," Genoways says. "It's got to be about regulation. It's got to be about incentives that are built into the system. For that to happen requires much broader changes than can happen through consumer habits."

Farm work may seem isolated: a solitary tractor trundling through a corn field, or a truck rolling down an empty gravel road. But the decisions made by consumers, policymakers and food advocates, Genoways says, really do have an impact on the families trying to make their living on the land.