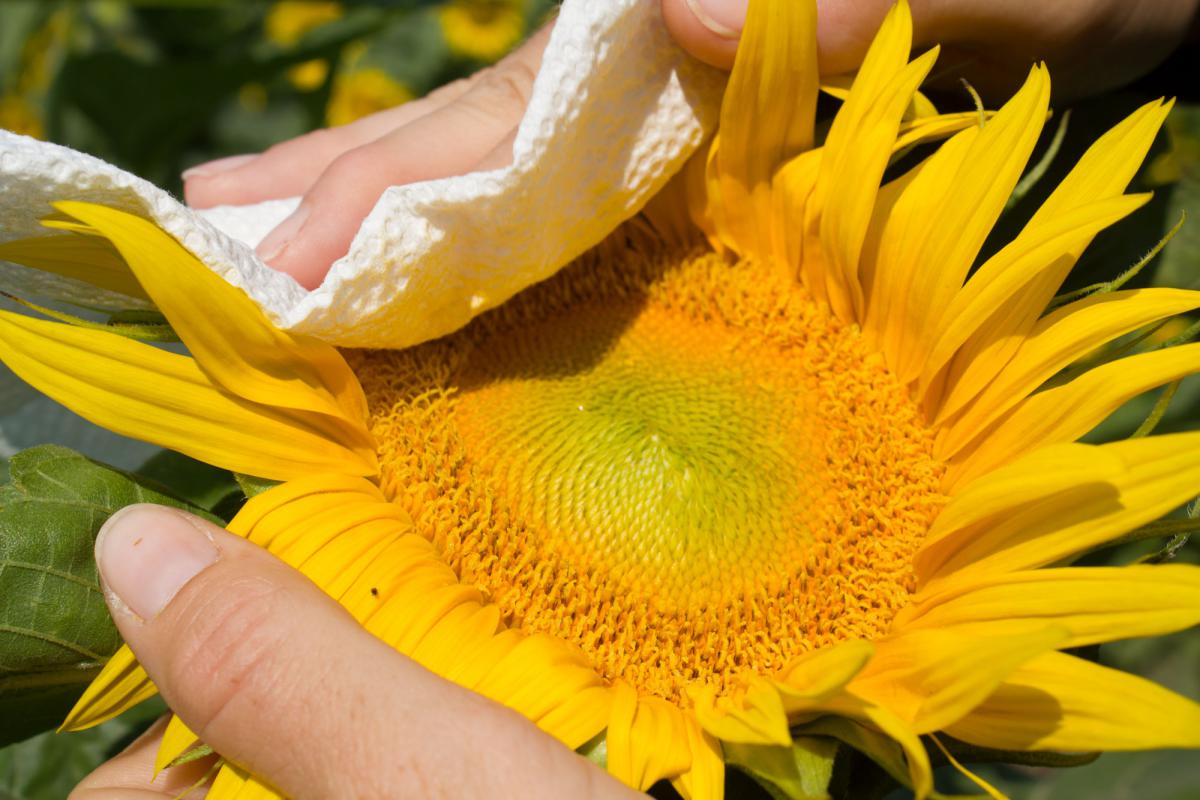 Plant breeder Jessica Barb is on a mission to improve how sunflowers self-pollinate, a trait that'll be increasingly important to farmers as wild bee populations diminish. Her research tool of choice: a paper towel.

In a field outside of Ames, Iowa, she swipes the paper towel across the head of a bright yellow-and-red sunflower - bred to feed Iowa State University fans' frenzy for all things in the school's colors - and transfers the pollen to a different flower. Researchers recently unlocked the genetic code of the entire plant, which means Barb will more quickly be able to identify the specific genes that play a role in self-pollination.

Sunflowers are a global commodity crop with a growing demand, though they're currently a minor player on the United States' agricultural scene. The genome mapping is likely to create better hybrid seeds, but there's no reason to expect the picturesque crop, despite its profit potential, to quickly overtake the Corn Belt.

A genome map, like a traditional map, offers landmarks and other features to help guide researchers to find what they're looking for. And knowing where certain sunflower qualities reside will help combat diseases, such as the Phomposis stem canker fungus that wiped out nearly 40 percent of the crop in 2010.

Mathew says it usually takes 15 years for discoveries like hers to reach the commercial seeds that farmers plant. But with the genome mapped, she says, â€œthat cuts back that 15 years to maybe 10 years, probably.â€

That might still sound like a long time, but farmers don't switch up their crops quickly because they want to be confident they won't lose money on something new.

Sunflowers don't require a lot of moisture and can tolerate heat and wind. North Dakota and South Dakota are the largest producers, with Kansas, Colorado and Minnesota rounding out the top five states.

About 80 percent of the sunflower seeds harvested in the U.S. are crushed into vegetable oil, with the other 20 percent going toward what the industry calls "confectionary" uses, such as the baseball-snack standard, baked goods and trail mix.

â€œWhat I think farmers are doing is they're looking for alternatives to grow different crops,â€ John Sandbakken, executive director of the National Sunflower Association, says. â€œAnd they're also looking for profitable crops and sunflower has been a very profitable crop over the years and it's something that producers have looked at just to give them some diversity.â€

Sandbakken says sunflowers generally are cheaper to grow than some other crops, meaning farmers might squeak out a profit in years when they lose money on other things.

Diversifying a crop lineup improves soil health. Sunflowers offer other conservation benefits, too. They have very long roots, meaning they can access deep water in dry conditions that would kill other crops. That also helps sunflowers access an important nutrient that may sink into the soil after being applied to previous crops.

â€œWe found in cases where we've grown sunflower after a sustained period of corn-soybean rotation or corn-soybean-wheat rotation that it finds nitrogen that other crops have left behind,â€ according to Brent Hulke, a scientist with the U.S. Department of Agriculture's Agricultural Research Service in Fargo, North Dakota.

In the right fields, sunflowers can be a money-maker that helps the environment. That seems too good to be true, and is for many farmers in untraditional sunflower-growing areas, because it's not cheap to drive the seeds to a far-flung processing plant.

But some farmers may be able find the golden ticket, as Congress is preparing to tackle the 2018 farm bill and there's fresh attention being put on conservation programs and oilseed crops, which include sunflowers.